Hello @ObscurityofDCClub and other members of the DC Community. Welcome to Week 10 of Obscurity of DC’s Obscure Book Club. This week, we’ll be focusing on… 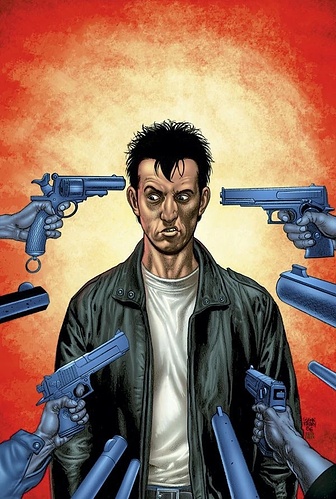 Description taken from dccomics.com: The world is a lonely place when you’re a man without a home — just ask Kev Hawkins. After murdering his boss in a nasty government scheme, he’s been banished from the United Kingdom under pain of death. What does the world hold for a man with little life experience or job training beyond wetworks and assassination? Then again, with the past about to catch up with Kev in the most violent and terrifying way possible, what the world holds for him may soon be beside the point.

Now that that short preview is over with, here are some discussion questions:

So I was just planning on reading the first issue…then I just ended up reading the whole thing in a sitting. I guess that says something about the quality of this.

I would say that he has a lot of messed up, heteronormative macho crap in his head that’s been learned several times over between his upbringing and his time in the military, and he has a hard time understanding that his experience isn’t the only proper way to live. So when he sees something like one of his mates is gay, it completely messes with his worldview.

But, to Kev’s credit, at the end of it all, Kev fought side by side with Danny without any problems when it starts. And at the end, when he’s taking out the guy responsible for it all, and we see the spread of all the soldiers that Kev ever fought with, Danny was there alongside them.

I’d like to think that if circumstances were different, Kev would have been able to accept Danny for who he is. He’d probably still been crass and gave Danny crap for it, but like Zoe said, that would have meant to Danny that Kev still cared.

Also, I can’t help but notice that Kev spent time with the Authority, and looking at some of the covers of those other series, there’s several covers with Midnighter. I have to imagine that if Kev was truly a horrific bigot, Midnighter would have probably crippled him for life.

In the beginning, absolute stress-relief, no question about it. After everything that goes down…I don’t know if I’d call it “love,” or at least in the romantic sense, but I think Kev and Zoe have a shared traumatic experience that made it so that they decide to stick together afterwards. I don’t know how well their relationship would keep after things got quiet again, but it’s not impossible that they could stay together.

I think his military training allows Kev to sort of turn off the part of him that would be horrified at what he and Danny were doing, and he had intensive need for revenge after what happened to Danny. I don’t know if there’s enough here to say either way if Kev enjoys killing – I think it would depend on why he enlisted and his record outside of what we see. But to me, he enjoys killing just as much as any other soldier, in that he enjoys being alive, and in some situations, killing is the only way that will happen.

You mean if Danny didn’t die or wasn’t there to begin with? I’m not entirely sure. I think Zoe knowing who Kev meant to Danny was what allowed her to stick around and try to help.

I don’t think so. Bob was on the other side of the country, from what I remember, and he couldn’t have gotten there in time and had no reason to until it was too late. As for Danny, I think if he immediately went after Danny or went after Zoe instead of Danny, Kev would have died in his place. Sometimes battlefields are cruel, and the people besides you can go out in an instant.

Midnighter would have probably crippled him for life

I’m being completely serious btw. If it weren’t for Apollo, you wouldn’t be reading about a bad-ass ex-military anti-hero!

Honestly, I’m kind of surprised that Apollo would. I know he’s not as willing to kill as Midnighter, but…not by much.