Hiya @ObscurityofDCClub and other members of the DC Community! Welcome to the second - in the best MLG gamer voice I can muster - MONTH OF OBSCURITY! For the month of April, we will be focusing on… 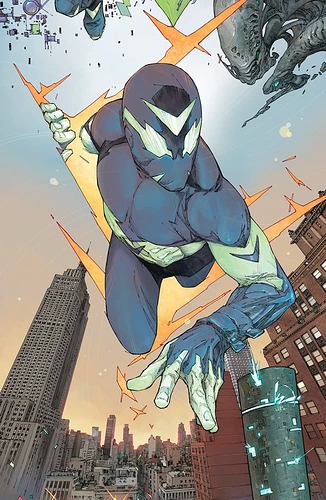 Description taken from dccomics.com: During the events of DARK NIGHTS: METAL, high school junior Derek James accidentally fell through a rift into the dark matter dimension! Now, as Sideways, he can create rifts in midair to leap through dimensions at will! But with that much power comes great liability—and cracks are starting to form in the fabric of the space-time continuum…

With that out of the way, here are some discussion questions:

I have to admit, Dan Didio’s involvement makes me very hesitant to read these, but I did like seeing him show up in Bendis’s Young Justice.

Just looking at the progression of covers has me excited for this one. I know absolutely nothing about what we’re heading for (other than he vaguely reminds me of Nightrunner for some reason - probably the Eiffel Tower?) so time to take the plunge.

Guess I ought to finish the second half of Sleeper soon…

Nightrunner! I miss him!

Yes, very much so. He’s Spidey to the point that I waver back and forth between thinking, “I find these comics so much fun because they feel like Spider-Man comics,” and, “This is such a rip-off of Spider-Man that I feel embarrassed reading it.”

Y’know originally I would’ve disagreed with you, but the more I think about it, the more I agree

Would it be weird I think Bendis should write a sideways sequel? He’s got experience with Spider-Man, you think it would be easy for him to write a rip-off version for DC.

Also, very glad to hear others agreeing with me

Now this is a good series!