The New Non-Walmart Exclusive 100 Page Giant Comics Are Out

I read over at Comic Book Resources that these were out and after a perusal of eBay (where my pic originated from) they are indeed available, and at a week earlier than new releases from the previous line would be.

Superman Giant #15 aside, this is the brand new line of 100 Page Giant Comics that are not exclusive to Walmart, but in addition to them they’re also going to be sold at Target and comic stores, with the direct market editions featuring new cover art while the mass market editions feature pre-existing artwork for their covers.

Here are the new series available so far, with details on what their content is slated to be (this info came from CBR):

-Ghosts #1: New stories by Dan Jurgens, Keith Giffen, and John Layman, plus reprints of four stories from Cursed Comics Cavalcade, and one story each from DCU Halloween Special and DC House of Horror #1.

-Scooby-Doo #1: 3 new ten page stories and 5 random reprints from Scooby Doo: Where Are You?

Wrapping up the lot is Superman Giant #15, which is the final book of the Walmart exclusive 100 Page Giants line.

These have been found at Walmart so far, but Superman #15 aside, they, again, will be available outside of Walmart at Target and comic stores as well.

There are also Aquaman (featuring Steve Orlando and Marv Wolfman on writing), Teen Titans Go! and DC Superhero Girls Giant titles coming along, but those don’t appear to be out yet.

Speaking of Villians, I think its going to be something special. In addition to Gail Simone, it will also feature the talents of Mark Russell (The Flintstones, Prez) and Tom Taylor (Injustice, DCeased, the new Suicide Squad ongoing), all of whom are writing brand new material for the book.

Anyhow, these will be a great jumping-on point for folks who never got into the previous Giant line, especially since they feature double (or more) the brand new content that those books did. 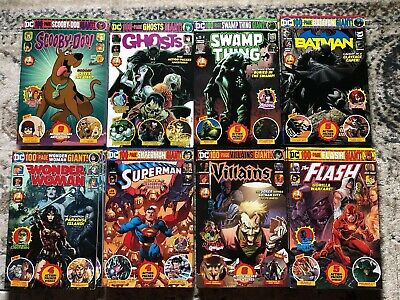 Thanks for the info @Vroom. Been wondering about the lineup of each book. I ordered Batman, Swamp Thing, and Ghost!

Scooby-Doo Giant aside, I picked these up tonight at Walmart. Went by a Target to see if they had the new titles, but nothing yet.

I forgot to say that Ghosts features a new Gentleman Ghost story.

I was on the fence about this title, but the inclusion of GG made #1 a must at least.

I passed on Villains but after seeing that lineup, thinkin of hunting it down.

All of these new stories will eventually be published as regular issues, right?

GG has been in recent issues of Hawkman too. It’s a good time to be a fan of Jim Craddock.

It looks like the Superman Giant series will be continuing for at least one more issue. Maybe that series is open to order for all retail accounts now?

On another note, the first page of WWG #1 is pretty sweet.

@Mae Likely, but several months from now and only after the new content from the Flash and Swamp Thing Giants is reprinted (if it is) so as to wrap up the original Giant line.

There’s also no guarantee all of the new content gets reprinted. Superman: Up in the Sky skipped past the new story in Superman Giant #1 to start with content from #2 instead.

If there’s a book you’re interested in, I’d recommend tracking it down now to avoid the long wait. So far, the new Batwoman story is worth it

Someone please educate me. I thought the new non Walmart Superman Giant wasn’t supposed to be out for a while?
Also, how does one go about acquiring these? Don’t have much experience with physical single issues. There a dependable website to order from out there?

@moro See, I’m a bit in the dark too. It would have been REALLY nice if DC:

A. Issued a press release about this new line on dccomics.com like they did a few weeks prior to the Walmart exclusive line debuting in June of last year.

B. Via said press release, addressed every detail about these new books such as: when and where they’d be available, the exact titles in the new line, creative teams for the new content and what the reprint content in each series would be.

C. Included these amongst their new releases via date-based New Release searches on dccomics.com. They did this for the Walmart line for a few months, and then stopped for some reason.

As it is, we’ve only had teensy little bread crumbs of information trickle out so far for this new line.

I hope DC snaps wide awake soon and releases a fully detailed press release with everything there is to know about these books, because, golly gee whiz Mr. Wilson, it might actually be of use to customers who want to BUY these books but CAN’T because of the publisher not releasing information about them in a sufficiently logical way.

As for accessibility @moro, most of the books in this new Giant line are available at Walmart right now.

Target is said to be carrying them soon, but there’s no info I’m aware of that says when (again, something that should’ve been addressed in a press release). Comic stores will be getting these too but AGAIN, there’s no info from DC on current street dates for the direct market editions.

Street dates were listed in solicits a few months ago, but those seem to have changed as the new Giants were originally scheduled to hit comic stores beginning in September, and well…we’re halfway through the month now and there’s nothing at comic stores, as far as info from dccomics.com, previewsworld.com and eBay listings show us. So…I say stick to Walmart for the time being.

I’ve not heard anything about a new Superman Giant series. My thinking is that the current book could be open to order from all accounts now and DC will just continue on with it. If we had some succinct information from DC, we might actually know what the plan (if any) for a new Superman Giant is.

Anyway, rant towards DC aside, these new books really are alot of fun so far and worth looking into. Villians Giant is great.

. Kinda regretted not collecting the original run from Walmart, so was looking forward to the “reboot” of the line. May end up waiting for Comixology releases like they’ve been doing for Up in the Sky, etc.

@moro You might hear a knock on your door from Sam Walton’s grandkids, comic books in hand, asking you to buy these at one of their stores

The new story in Superman Giant #15 was really quite good. I enjoy Tom King’s Superman heaps, and then some.

I still need to buy Villains, Swamp Thing and Flash. If it helps anybody I live in south west Virginia at Wal-Mart. I also would love more info about what we’re getting. I’ll give what is it 12 100 page Giants a shot but man $60 bucks a month on single issues on top of the raised prices of DC trades and let’s not forget any other non Giant single issues something will have to give. Depending on the content I don’t think Teen Titans Go or DC Super Hero Girls will be my thing. Villains, Ghost and maybe Swamp Thing would be the the next I look at and think do I really want these. Superman, Wonder Woman and Batman are always going to be on the but lost and we’ll see about the others. Scooby Doo is one I really like but I’ve also been a Scooby fan for as long as I can remember and I’m 38.

The 100 Page Giants can be ordered through your comic shop. Westfield Comics has shown solicitations through their monthly ordering system. My understanding is the 100 page giants will go to the “mass market” stores before the LCU’s get them. The LCU’s, however, get a new cover while the “mass market” gets a reprinted cover.

@LPCustom76 Like you, I’m not planning on buying the DC Superhero Girls or Teen Titans Go! Giants. Scooby-Doo isn’t a pick-up for me, but Aquaman certainly will be.

@wjccpamst.1292 Right you are. I’ve seen the direct market covers for this first group, and while I had thought about buying this new line at a comic store, I’m happier with the mass market editions so far.

The Constantine Tale in Ghosts sent a shiver up my spine. The whole issue was phenominal