The first few pages and last pages were great. It was cool introducing characters but I couldn’t help but think it was a mini series and most of these characters won’t be seen again for a long time. I might be wrong (I usually am when it comes to this kind of stuff)

Thanks! I have read way too many comics recently to keep everything straight.

Welcome back to the community @pyrotwilight.98132!

Robbie the Robot Dog was in Stars and STRIPE 8. We did not meet that issue.

I mean I already read Stargirl and it was great, but JSA.

I am only reading a few series in floppies and they both made that cut.

Hangman’s treehouse? Sounds like a Peter Pan reference. Fitting with how the island works.

Good job me on not dropping the staff. I normally do when hit in the air.

I am probably just overthinking this, but the chicken legs on The Childminder remind me of Baba Yaga. I think her eating them is too one dimensional for a villain written by Johns.

Ladybug has a great costume.

The part about the Stepfather arrives next issue. I think Pat is too obvious.

I am just happy there are choices for these characters!!!

Likewise. Multiple Justice Society-related books are always cause for happiness. 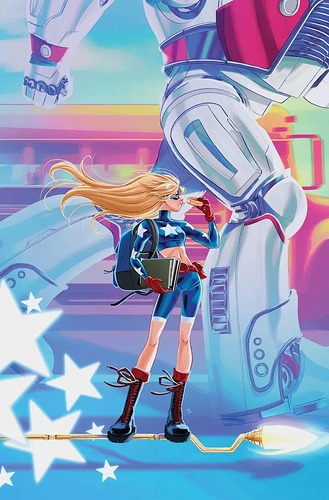 I forgot the smile count. I smiled 4 times this issue.

I read the sneak preview of JSA 2 and i see according to Johns new timeline Red Tornado turned down membership.

him being on the team was probably just a mistake anyway. 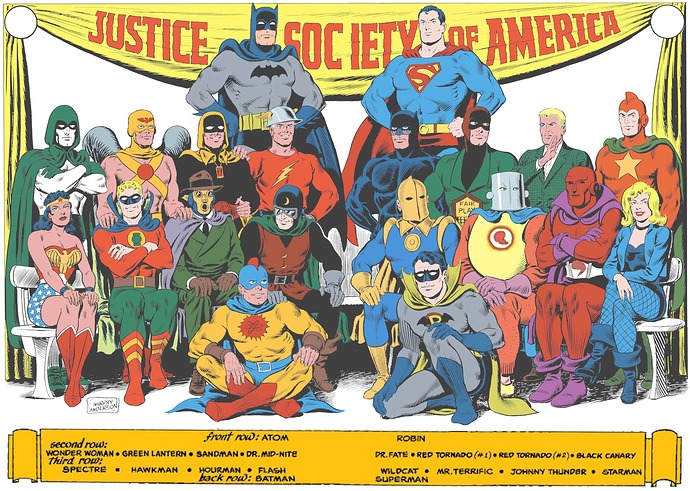 196808_25_anderson_m2d271920×1368 414 KB
In the list of names, it does not say that Ma Hunkel is just a friend or just an honorary member, so when I was a kid, I probably just assumed she was a member like the other names on the list.
Version with updated robin costume: 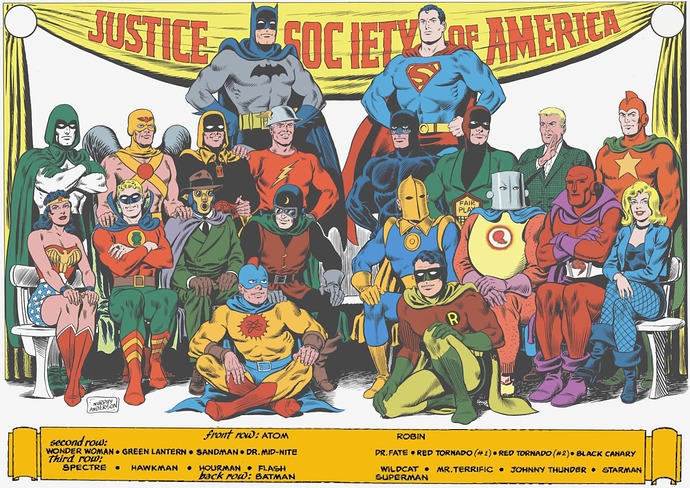 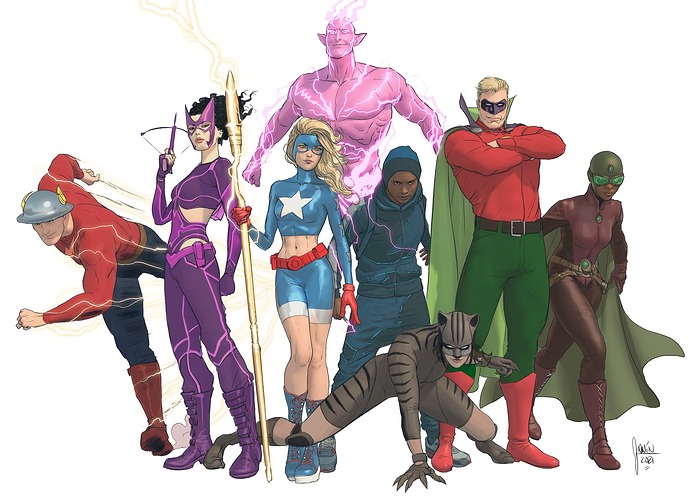 I haven’t read any of the previous replies in this thread, so I’m sure the rest of you have thoroughly dissected this fact, but the Stranger confesses to having killed Kennedy, who died on 22 November… The same day Doctor(s) Fate dies. Coincidence? Sure, and Tim Drake and Conner Kent are just good friends. 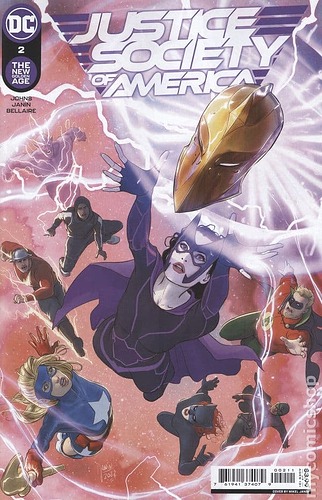 B cover, by Yanick Paquette. 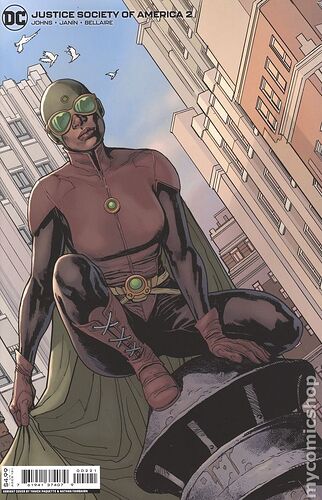 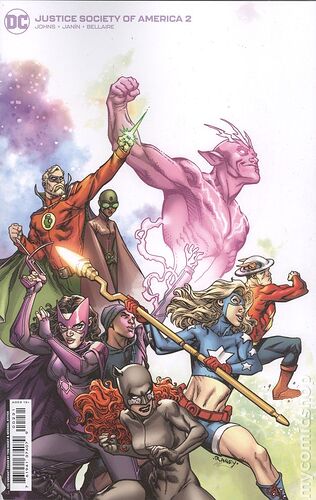 I just read issue 2. More time shenanigans and even a mild tie in to the last issue of Stargirl. Plenty of Dr. Fate, and thankfully it is helpful and heroic Fate, not the cruel one that keeps popping up.

I see Fawcett superhero Diamond Jack was mentioned in the new issue. That seems to infer that he is now part of DC continuity. Maybe there’s hope for my boy Golden Arrow. Particularly since he’s been listed in the last several DC Encyclopedias.

In the latest issue Mr. Miracle said they are after the Bride of Grundy. Might mean Cyrus Gold was married.

I see Fawcett superhero Diamond Jack was mentioned in the new issue.

Yes! Diamond Jack is mentioned by Mister Miracle as a member of Justice Society Dark alongside Zatara (apparently, they have issues). Diamond Jack was a Golden Age Fawcett character who first appeared in 1940’s Slam-Bang Comics #1. He was a dude who was given a “miraculous diamond” by an old wizard that gave him vague magic abilities that allowed him to do whatever the plot needed him to do.

Another thing to note about that scene is that Mister Miracle mentions having a daughter. This is strange because his Who’s Who entry in The New Golden Age #1 only mentions his son, Ted Brown, who popped up in Kirby’s Mister Miracle series from the 70’s. Brandon Easton’s version of Thaddeus Brown had a daughter named Rose, but this still doesn’t appear to be Easton’s version of the character. Is this daughter a version of Rose or a character we have yet to be introduced to?

In the latest issue Mr. Miracle said they are after the Bride of Grundy. Might mean Cyrus Gold was married.

This is tough to say because there have been multiple back stories for Cyrus Gold over the years and I’m not sure which one is currently canon or if any of them are even true. However, it seems that Cyrus, at one point, did supposedly have a wife named Pearl. The Bride of Grundy could be her. Maybe Pearl had a similar experience in Slaughter Swamp as Cyrus did.

Also, it has been established that there is more than one “Grundy.” In Seven Soldiers: Klarion #1, we get to see how “Grundies” are made in Limbo Town. After the male residents of Limbo Town die, their bodies are resurrected and they are magically branded into servitude for their families to do all the hard labor. 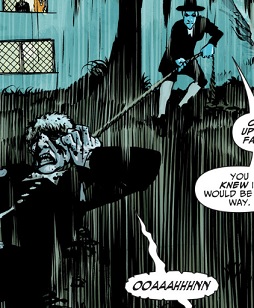 As far as I know, this only happened to male residents of Limbo Town. However, another explanation could be that this process happened to one of the witch women of Limbo Town, and this is The Bride.

At the end of the issue, Helena is blasted forward through time by the snow globe. There are some interesting things to note here for the timeline. First, she goes through the scene with Fate, Salem, and Miracle defeating Grundy in 1941. This means that Justice Society Dark are active by '41. Next, she goes through the scene of her mother first putting on the Catwoman costume from Batman: Year One (Batman #406, to be exact). That had already been established as happening thirteen years ago in issue #1. Then we see the moment where Extant destroys Doctor Fate in Zero Hour #3. That sets Zero Hour as happening eight years ago. Finally, Helena phases through the moment when Khalid Nassour becomes the new Dr. Fate which happened in 2015’s Doctor Fate #1. Apparently, that happened only a year ago. Helena lands in the present day DCU. Those are some interesting developments regarding the current DC timeline and shows that not everything in this new timeline is moving in real-time.