What did everyone think of the latest Doom Patrol Trailer? I thought it showed real potential for a great show. I takes aspects from the three main Doom writers; Drake, Morrison and Way. The action scene with Robotman was pretty good for the couple seconds it showed.

I really think the Robotman costume looks amazing. It was really cool that it showed Jane painting like in the Morrison run even though I’m very sceptical on how they’ll make her character work with all her personality and powers. It only showed a bit of Larry/Negative man but I really hope that they make the negative energy or rebis not look terrible with poor CGI. I’m just kinda confused on them going with the Morrison/Way look of N-man but calling him Larry as if he was the Drake version. Rita looks cool and pretty much like what if she was a live adaptation from Drake’s run. I was hesitant on cyborg being in the Doom Patrol since he never has even be part of it, but from what they show I think he’s tragic backstory and sense of humor with work really well with the team now that I’ve seen a little of it. The quick part of seeing Mr. Nobody was a different take of the character but I assumed that sense I wasn’t sure how that would make his character into a live form. Didn’t see much of the chief or Danny the street so I can’t wait to see what they do with them.

I’m not sure if I’m bias since they are my favorite team and characters. I just think the actors, the humor, the action, the story and situations that they can go with in making this live-action adaptation has great potential. 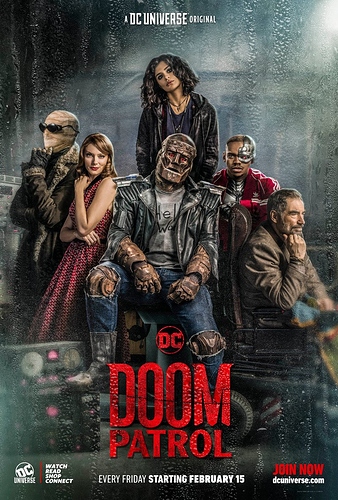 I think it looks fantastic! Cyborg makes a great addition to the team. Hope they crossover with Titans again so we can see Gar and Vic become friends.