I have a question. Where is Arkham Asylum Located in Gotham City?

Before you answer a few clarifications.

It seems many people online mostly gravitate towards the Elliot R. Brown map of Gotham (1999) pictured below. In this version Arkham Asylum is placed on Mercy Island on the west side in between the north main island and the middle main island.

Also quick aside, the old Arkham Estate (before Bane destroyed it) was placed north of the city on mainland Bristol. I found the DC Universe RPG that has this picture in it but the written words say that the old Arkham ruins are actually in mainland Sommerset to east so there is a small discrepancy there. That’s for another post, lol. 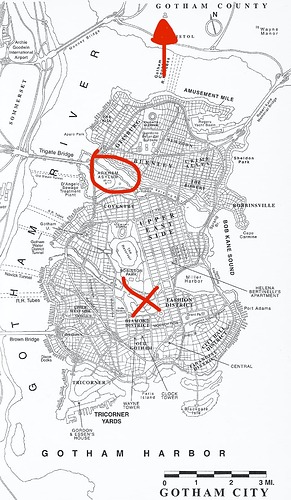 The Nolan Trilogy came along and although I love it, kinda messed up the map. Firstly the Wayne Estate and the Airport are reversed. in the top left corners of the map. Many names are different. But the one that seems like the biggest change was the addition of The Narrows island and moving of Arkham Asylum.

Now the wide popularity of these movies and the integral part the Narrows/Asylum played in Batman Begins the Narrows continued to show up in Batman related things.

So my question is, where in your minds eye is Arkham Asylum? Mercy Island? The Narrows/the New island? Sommerset? Bristol? other mainland location?

Let me know what you think! and if you were to oh… i don’t know making a fully detailed map of Gotham city (

) where would you place Arkham Asylum and would you include the Narrows at all because it’s become ‘Part of the city’ since the mid 2000s.

MODS: I am sorry if this is against the rules but I didn’t read it anywhere. I already created a post under fan creations and didn’t get any responses. I was wondering if maybe I posted under the wrong thing. So I thought would try my luck creating the topic here so technically this is a repeat post. Please delete either post that goes against the rules, and let me know if there is a better place for post like this.