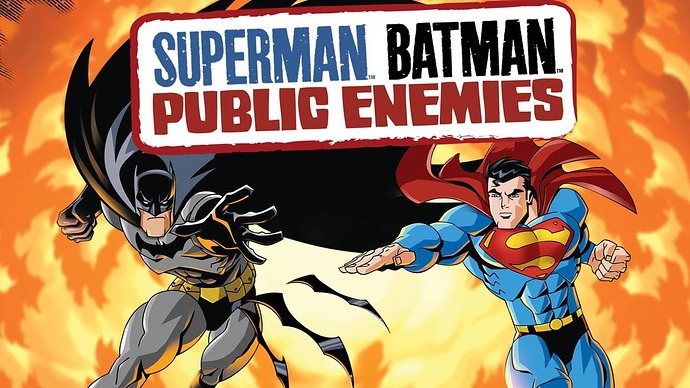 Lex Luthor is President of the United States and sets heroes and villains alike against Superman and Batman, as they become…Public Enemies!

If you’ve previously participated in a Watch-Along, you know the drill, but if not, read below for how YOU can join in on the

Where: In this thread, and on the above date and time.

With: The @ModernAgeSupermanClub and anyone else that would like to join in on the fun. ALL are welcome!

How: Superman/Batman: Public Enemies is available on DVD, Blu-ray, Digital HD and Digital 4K while also streaming on HBO Max.

Pick your poison for how you want to watch the movie, then comment here as we watch it.

That’s all there is to it! Fun in the sun with your pals and a great flick!

I hope to see you in this thread on Sunday, September 12th at 2 PM Pacific/5 PM Eastern, Super Friends!

Cant wait. See ya there
Love this movie

Groovy! Look forward to seeing you!

says the following in his best Bob Uecker voice

Juuuust a bit less than an hour to go!

@bigblock66 Will you be joining us, today? I hope so.

i do believe I am going to make it…

cued up at the WB Logo , and ready to go
whoohoo

@Bar-El Are you ready?

Having your corporate logo up at your inauguration isn’t a problem….

Yes the best credits sequence ever!!

This is Katana’s sole animation appearance in her classic Batman and the Outsiders uni.

I like Tim Daly as Superman. here and in Apocalypse.

This is Katana’s sole animation appearance in her classic Batman and the Outsiders uni.

I didnt know that. wow

Brave and The Bold might have the best animated outsiders. outside of YJ, i.e.