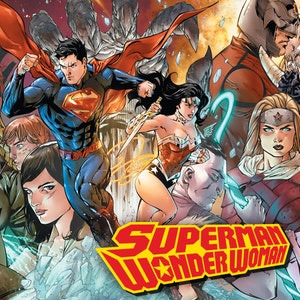 ), what better time than now to talk about two of its stalwart heroes, Superman and Wonder Woman, and when they were in

You can catch the first New 52 smooch between the two here: 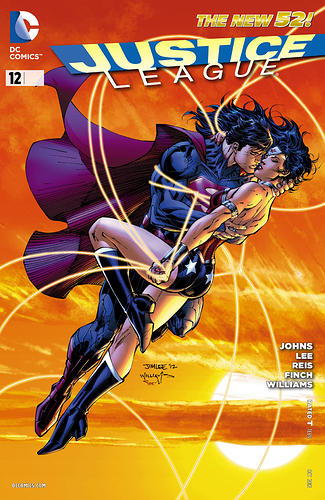 The team struggles to stay together as they combat their newest foe, while simultaneously trying to keep from combating each other! 'The Villain's Journey'...

Then, mosey over and read issues 1-6 of this ass-kicking team-up title: 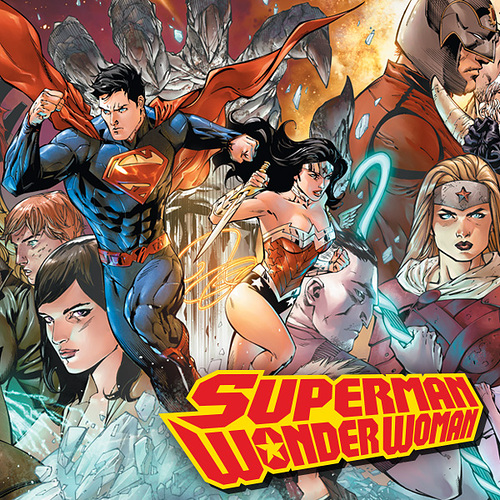 Superman and Wonder Woman’s relationship blossoms in this New 52 series, as the couple juggles romance with world-saving.

Chat-up whatever comes to mind about the above comics and do, or did, you ship SuperWonder?

Discuss below, and have fun!

The series I always stayed away from. Just the idea never sat right with me. I did pick up a few trades at Ollie’s a while back for like $3 a piece. I will see if the first volume to read!

The series I always stayed away from.

As our one (as of this writing), LA big-screen Hal Jordan once said, “But…why?”

I mean, its got Superman, Wonder Woman, General Zod,

For any doubting this book, check this out: 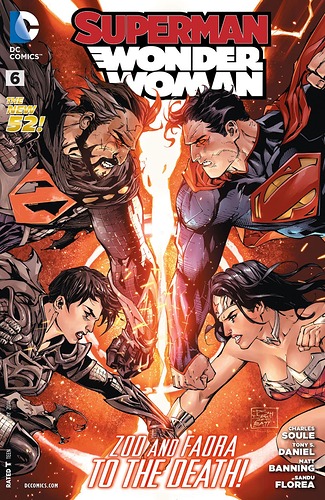 Or at least the first six issues.

As much as I embraced New 52 Superman (I prefer Superman over Action Comics during this era…) I never got behind the Clark and Diana relationship. There was a storyline, I think in the year 2000 - it was in those trades that covered the entire year and had the New Metropolis storyline, that Clark and Diana were on a viking planet spending a lifetime with each other. The thought of returning to Earth was long gone and Diana offered to be more than friends with Clark. His response was no as Lois was the only woman for him. I know its silly, but that is how I see these characters.

I know its silly, but that is how I see these characters.

Nope, not silly at all. We all have our own preferences.

As for Action and Superman during The New 52…that’s tough. I liked Action more from a writing standpoint (Morrison is one of my favs, after all), while I liked Superman more from an art POV.

NGL, I’m imagining Marisa as Lois and…I like it, a lot.

I had an unexpected hour break so I read issues 1-3. Outside of the relationship thing that I talked about earlier, I am enjoying this. I do wish they would have focused on Doomsday more but the Zod story is pretty good, so far.

I also enjoyed the Clark and Diana romance. It was nice seeing it explored for more than one issue. I mean don’t get me wrong Clark and Lois all the way, but after 80 plus years a change was nice to read, and of course everyone wanted to see what type of couple they would make. As to the Comics, I loved the art and stories pretty much throughout this series. I particularly enjoyed the Boss fight between WW and Zod.

Marisa as Lois, had never occurred to me, but you are right perhaps some perfect casting there.

I just wrapped up the rest of the curated books and I must say, I am enjoying this series. The art is fantastic! I am curious of the damage caused by the nuclear reactor explosion, did it kill Zod and Faora?

I then went on to issue 7 because I wanted to finish the TPB and that was pretty good. A lot of it was filler but the end of invoked Doomsday’s earlier appearances - his fist.

This was an interesting story. I haven’t really read new 52 Wonder Woman before. Diana seems a bit full of herself. I understand the attraction of a Superman/Wonder Woman romance, but I will always be team Lois. Having said that, it was fun to see them work together.

I strongly suggest N52 Wonder Woman. It does change a few things to Amazon mythos that some dislike but overall it does a lot for Wonder Woman.

Marisa as Lois, had never occurred to me, but you are right perhaps some perfect casting there.

Right? I could definitely see her as a swell Lois.

I just wrapped up the rest of the curated books and I must say, I am enjoying this series.

You can’t go wrong with anything starring Superman and Wonder Woman, while also being drawn by Tony Daniel.

I strongly suggest N52 Wonder Woman. It does change a few things to Amazon mythos that some dislike but overall it does a lot for Wonder Woman.

Heh, I read most of this when you first posted it but kinda forgot until this was bumped up.

Anyway, I remember when the whole pairing was announced, I was definitely curious to see what they would do and how it could shake things up. It was interesting because this was something that could have only been done with the New 52 reset – if you’re going to change up continuity, why not do something bold with it?

As for the SM/WW story itself, it’s pretty good – I think it’s easily the best arc that came from this book. Tony Daniel does incredible art in it and I like the introspective and more character-focused moments in the story. It was nice to see both characters being challenged by this relationship and even having a bit of an argument, makes them feel more like people. It was nice that it wasn’t just those two and that they also had friends in the form of Batman and Hesia.

One of the best moments was when the two encountered Apollo. In retrospect, maybe the god of the sun blasting a guy powered by the sun wasn’t the best idea. 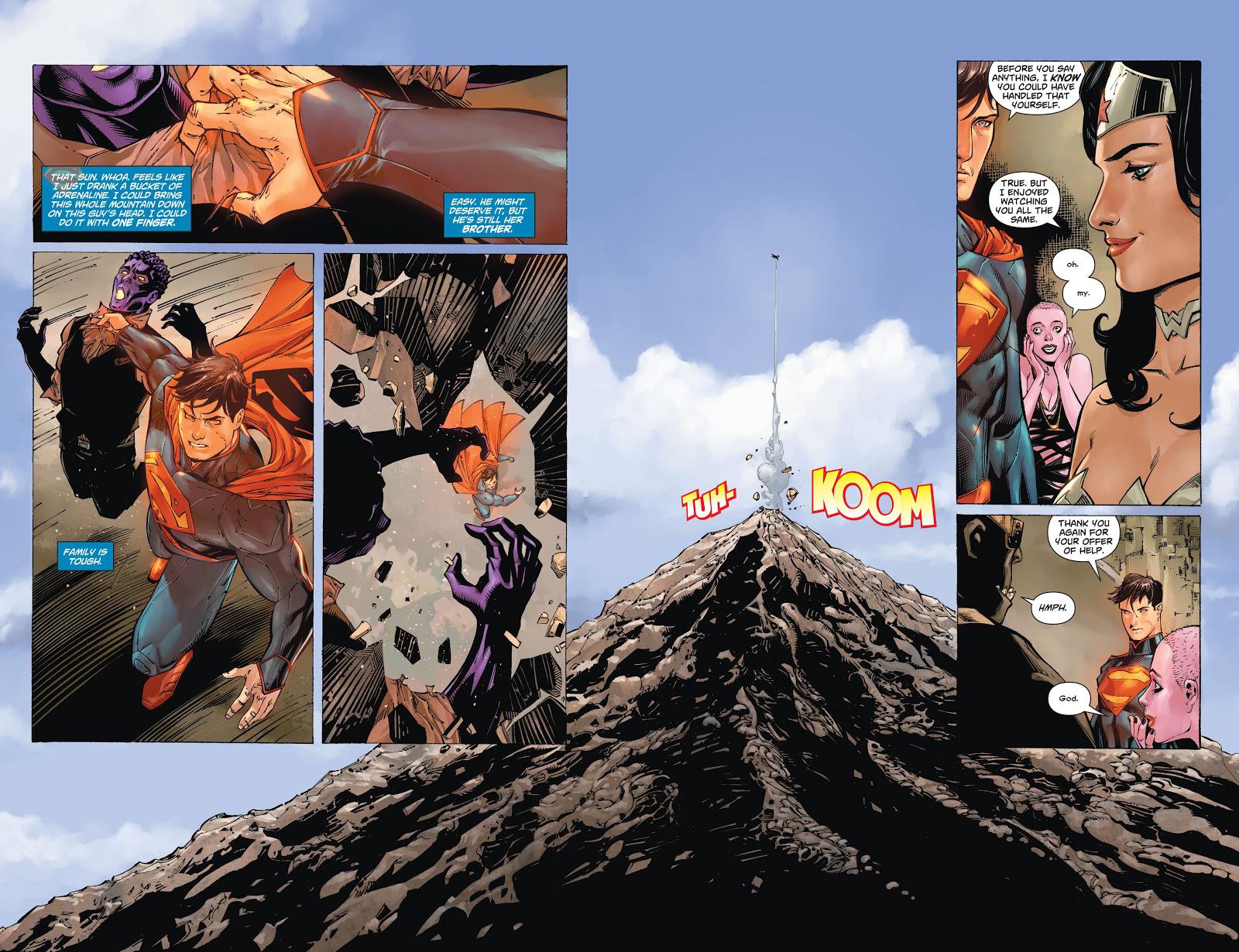 And the whole fight with the two and Zod & Faora. The two were perfect antagonists for this story – their love for each other and their desire to conquer was a good, twisted reflection of what Superman & Wonder Woman have. The best moment in the fight was definitely how our heroes ended it. The only downside is that I kind of wish Diana did a full Han Solo and said “I know.” 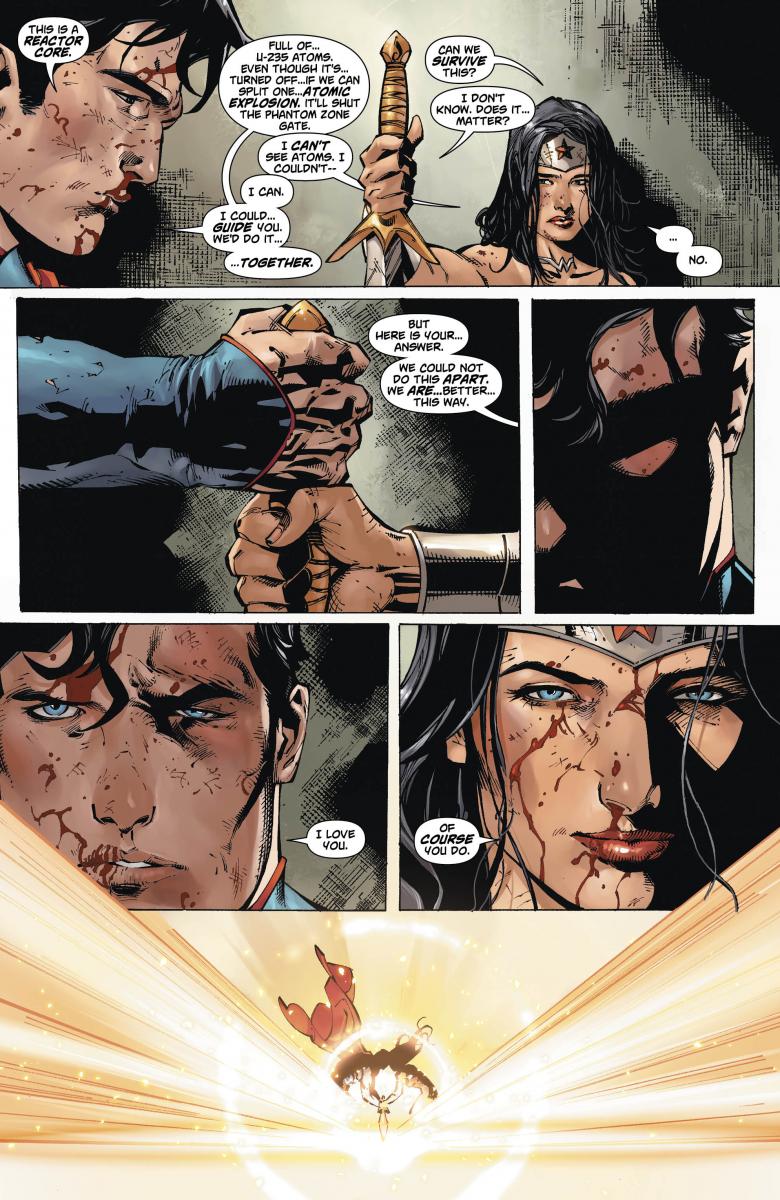 And the whole fight with the two and Zod & Faora. The two were perfect antagonists for this story – their love for each other and their desire to conquer was a good, twisted reflection of what Superman & Wonder Woman have.

No spoilers, but this story reminded me of Zod and Ursa as seen in recent episodes of Young Justice as well.