I feel like we don’t see I&S as much these days but I am still so glad they can get away with it when they do. I feel they do a better job at the horribly hilarious violence than HQ is doing at the moment. Not that HQ is bad but I&S are just so good. seeing bart and lisa crack up to it also makes it funnier to me i think.

“Hello Poochy, you look like you’ve got something to say. Do you?”

the animation still is literally moved past the camera to convey Poochy leaving Earth, which then cuts to “Note: Poochy died on the way back to his planet.”

Alright, did a weekend binge of these comics. I am pretty sure I read these in the past, but not sure I actually finished the story. I think it got a little long winded towards the last few issues, which is probably why I didn’t finish it years ago. It really felt like it could have or should have been wrapped up at least by the issue 10, but still had two more to go just to extend the story.

Anyways, I finished all 12 issues this weeked and it was a good story, but I still think long winded and could have been condensed considerable.

I have a great love of Plastic Man, so anytime I get to see him on the page is fantastic, and this was no different with Alex Ross. It was great seeing him as the chair when Captain Cold was being interrogated.

I feel like some of the villains, or even most of the villains were extremely one dimensional. If there is anything I have loved about the evolution of comics over the 40 years, it is that almost all characters, villains included have been fleshed out and given great motivations and back stories. It’s no longer “I’m a bad guy.”

And I get that a majority to all of them were mind controlled. Which explains the focus on Lex and Brainiac. But the simple views of looking at them… I think it Batman who said something along the lines of ‘they are bad and can’t work with other people or have families because they are bad.’

I also found the use of Green Lantern a little bit of a call back to his classic comics where his ring was overpowered. That his ring can do “anything” and “everything”. Erasing all the nanobots from the air while simultaneously erasing wiping the heroes identities from everyone’s minds is not something you would find a modern day Lantern doing.

I do think this would be a great animated movie or limited series.

@Meisaj, Well howdy! and thanks for stopping by. Sorry for the late response, I’ve been kinda busy for a while. (1978) LOL.

I agree the story could have been told in 1 or 2 less issues but then I would have gotten less art by Ross so I didn’t mind it or really pick up on it dragging or anything. Around which issue would you say it started feeling long winded to you?
Plastic Man is great. Not one of my top favorites but he is always hilarious and would pick him over EM any day.
I see what you mean by the villains being one dimensional but I feel like it served its purpose for telling the story that they were going for. I think they focused on the 2 main points for the story. First you have the scenario where Grodd is controlling them to simply fight/destroy them in that particular moment, which would be the one dimension side of things. Then they do look at them in a deeper sense in that because of these visions of the end of the world, besides Brainiac & Lex, they thought they really were saving the world from the JL. As for GL, while I do like him in this story, I have never been the biggest GL fan and have always thought that the ring was OP.

Do you have any particular covers or panels from Justice that you loved or stand apart from the the rest? Feel free to share a pic. would love to see which were your favorites.

Thanks again for joining in for the Loose Canons maiden voyage! Next installment will be The New Frontier on the 17th!

Did you like the story, and have you read this story before?

This was my first time reading this particular story. I thought it was bit long winded to be honest but I liked it well enough. The best part for me was the Ross art.

Alex Ross is the best in the business when it comes to his artwork. It can be hard to pick a favorite piece of his work, so I’ll make it a little easier for this one: Which panels were your favorite in this story?

I loved every panel to be honest so it’s difficult to chose. I’ll post a few panels later though.

"How do you feel about the Villains actions given the circumstances at hand?

I thought the villains here were very one dimensional but given the circumstances I can understand why and so can let it slide this time. Having said that though I still disliked how one dimensional they were here because generally speaking I don’t like it when characters are written that way. Makes me think they are expendable as far as the writer is concerned. It’s just a minor nitpick I have.

Do you think this story would be worthy of a film adaptation?

Most definitely it should be a film. It would be amazing.

Here are my two favorite covers just to start off with. 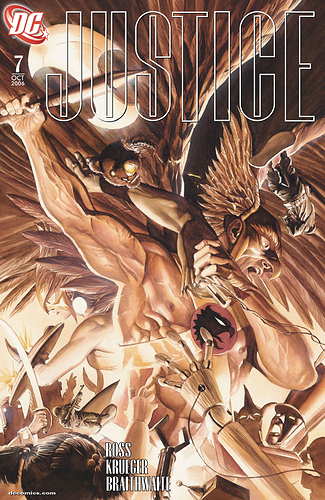 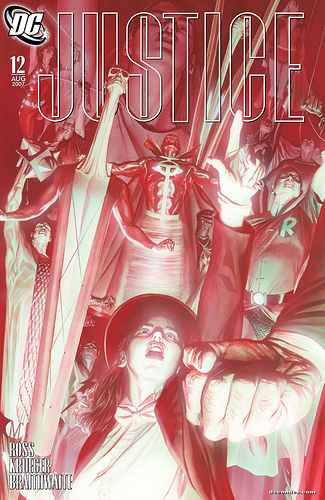 and one of my favorite panels that also is one that @Vroom posted before. 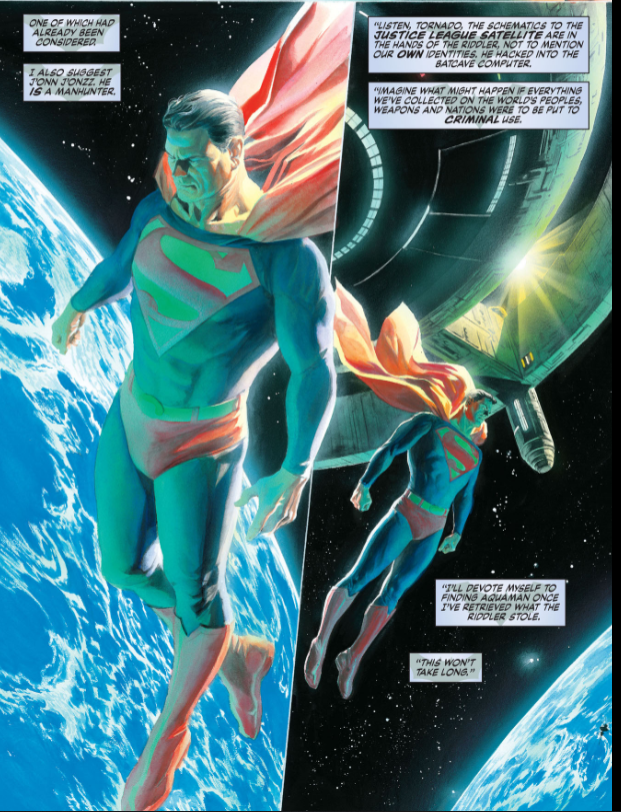 Something about Superman just floating there in space with the Earth as a backdrop really gets me. This is my favorite panel of the whole story.

@JasonTodd428 Howdy and thanks for joining in! Yes this would be an amazing movie plot. Animated or Live action.

Yeah the image of Sup’s looking down of earth from space is always a good way to go. beautiful and godly.

Did you like the story, and have you read this story before?

Yeah, I dig it. I read part of it when it first came out, but I had to drop it to stay in budget and but everything else I wanted. It’s good, though, and Alex Ross is always amazing.

Which panels were your favorite in this story?

I don’t know how to copy over images from the comics on here, however my favorite in this series was when Captain Marvel saves Superman and offers gonna hand up.

How do you feel about the Villains actions given the circumstances at hand?

They were mostly being controlled so it is what it is. It does often seem like Luthor is the smartest idiot alive.

Do you think this story would be worthy of a film adaptation?

Of course. I would rather it be live action over animated. Don’t spread the word on me or anything, but I would take that over the Snyder cut everyday of the week and twice in Sunday.

Agreed that this story would make a good basis for Justice League 2. I might sprinkle in some ideas from Legends, too.

@ralphsix, Howdy! Glad you could make it friend. I know what you mean about having to drop a run to stay on budget. That’s one of the great things about this service, I can go back and finish stuff I had to bail on way back.

Oh your treason shall spread across this community like the red skies of Crisis! Run if you want but there is no saving you!

no all good and for me I might say the same.

Are you talking about the Legends story dealing with Darksied from the 80’s?

A Justice League sequel with bits of Legends mixed in would be quite entertaining.

@AlexanderKnox, That would actually be a great direction if they wanted to set up a couple movies and get back to a shared universe.

Makes a side note: Legends for book club…unless Vroom wants it

hunches over the Superman tie-ins

I should be doing the Batman tie-ins in March (since you-know-who is in them).

@Kelex Did I guess correctly?