The Locations of Metropolis and Gotham…WT(BEEP)

I am working on some good old batman fanfiction working on a version of Knightfall adapted to the DCAMU. and need superman to check batman for injuries. being a good little fact-checker I opened DC Fandom/wiki and looked up was Metropolis is… I always thought Metropolis was in Kansas or near LA as it never really seems to get cold there (in the tv series the '90s at least) and you see Clark driving up to his parent’s house in his pickup in batman superman: apocalypse…which raises other questions, however, it turns out it’s in New York (state)… on the other hand I always thought Gotham was in New York turns out its in new Jersey. who knew New Jersey was so corrupted.
Batman V Superman: dawn of justice just made a whole lot more sense. however, why is it Metropolis gets New york when gotham is the older far more corrupt city.

Now I am wondering just where everyone else thought these two cities were located?

Hey, NBBS! I wrote about this in a column last October:

Thanks for bringing your article to my attention I am still new to the community side of DCU. however, there is still the question I happened to ask at the end: Now I am wondering just where everyone else thought these two cities were located? As not everyone got into the DC mythos the same way I was wondering how others would answer the question.

I thought that Gotham was in New Jersisy

The Atlas of the DC Universe from Mayfair games places Metropolis in Delaware , and Gotham somewhere in New Jersey. 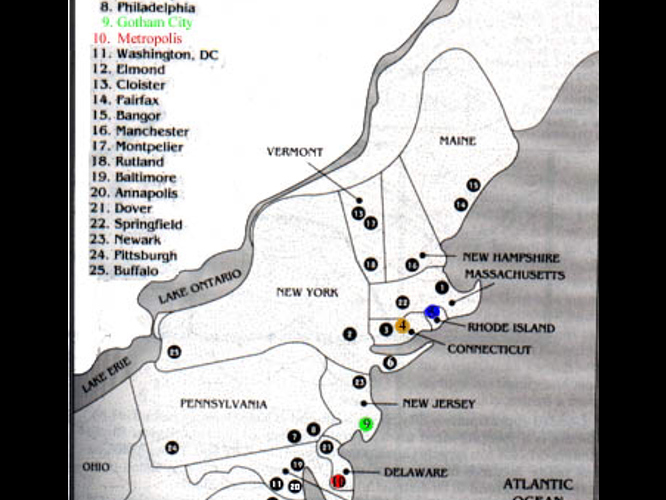