So lads and lasses, what’d we think? 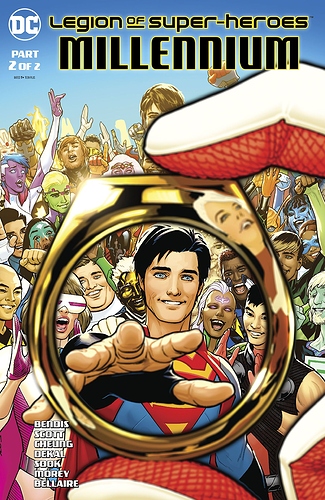 Didn’t like the first one. The second one was more of the same.
There’s no meat to any of the stories. There was no reason to merge all these worlds into the same earth. All it does is pretty much write in stone that no matter what the heroes do in the main timeline, the world is doomed over and over. It pretty much forces the DC Universe into a hopeless bleak world doomed for destruction over and over.

I think the whole founding of the UP was a mess too.

Basically, what I am saying, I think it would have been better if there was no introduction to the new Legion. They should just have started with issue 1. That would have been better. The House of El arc and Millennium are the midichlorians of the Legion. Sometimes it’s better not to know when knowing kills the magic.

I’m going in the other direction on this. First, I’m never too worried when someone lays down the definitive future or universe in comics. It’s only set in stone until the next writer decides it isn’t. The time stream is malleable, it has and will change.
On this issue, I enjoyed it overall particularly now I knew what to expect from issue #1. And, I loved the intro sequence with Booster and Rose, that’s future history I can get into. The other vignettes were fine, though I liked the less structured space segment better than OMAC. As for the Legion, the jury is still out for me. The LoS has undergone changes in how it’s presented before but this at least superficially is pretty dramatic. Ascetically, most look fine but Beatnik Brainiac is only beaten in horribleness by whatever they’ve done to Timberwolf.

What was your take @Vroom?

Yes, Vroom? Throwing out the rhetorical bait and then sitting there in your little camp pop up tent with your cheese puffs and watching what happens like an orange fingered Jane Goodall. What’s your take.

I vote to give @msgtv his own ongoing. I laughed loud reading that.

munch, munch These are some goooooood Cheetos. munch, crunch, munch

steals Vroom’s Cheetos while he’s out

Alright, so munch munch my problem here is that the whole thing feels like a really long prologue. Which would be fine if it was just ONE issue instead of 2. As it stands, munch munch I don’t see why this couldn’t have been collapsed into a single one-shot. The various vignettes are all fine, but I don’t see the purpose of them beyond “hey, remember OMAC?” steals Vroom’s drink It looks like Rose/Thorn is going to be playing a large role in the Legion title proper, so I imagine these scenes might have greater context later drinks, but right now they just feel…like a thing that exists, I guess? digs for crumbs at the bottom of the bag The artwork was all very good though, and I am looking forward to seeing what Bendis does with the team (if nothing else, he is very good at writing teenagers).

Also, if you’ll forgive my pointless nitpicking, it still bugs me that Bendis decided to reboot the Legion wholesale instead of continuing on with the Retroboot Legion.

shakes a now empty can of Jolt Whaaaaaaaaaaa?

Man, good thing I raided those from Dean Wermer’s personal fridge. Hee hee, the ol’ “Hello Dean, I’m here to wash your windows as you leave your office.” bit worked!

Good thing Wermer didn’t see me yoink his beef jerky stash. pulls open a bag and marfs down Or that I said “Hello Dean, you’re a stupidhead!” after he had left his office.

Narrator: By interacting with the subjects of his study by allowing them to eat orange colored crunchy snacks and drink carbonated beverages, Vroom has violated the separation between the observer and the observed. This interaction, while seemingly harmless threatens the academic integrity of the study’s results. And yet, his ground breaking work remains fascinating. Let us continue watching Vroom watching the debaters.
Sips tea and pulls another Royal Dutch Butter Cookie out of the tin.

Well I broke down and I bought two digital copies right number one and number two of this.

Ouch. Jerry Lee Lewis used to say whole Lotta shakin goin on? this is a whole lot of nothing going on…

I did like seeing Booster Gold but it went nowhere. There was literally no plot no conflict nothing. Some nice art some cute observations but I just spent something like $8.50 and total maybe $9 well I’ll just continue my unlimited philosophy that’s for sure, this cured me of the itch to buy an individual issue going forward.

For that my pocketbook will be forever thankful

Narrator: While the remaining debaters…debate…the merits of the 2-issue exercise in brand management, the subject tagged as “CaptThunder001” remains silent, carefully waiting for the moment when Vroom’s back is turned so that he may pilfer from the tent once more. It appears as though an ecological disaster not seen since rabbits were introduced to Australia is about to occur…

I honestly liked it. It’s not a traditional action superhero story, but it was interesting as an extended prologue that’s really piqued my interest in how Bendis will handle the Legion. Just New Earth alone made me sold on this concept.

Yeah the visuals are great, the way they show New Earth is eye-popping to say the least… It just would have been cool if there was a antagonist / protagonist concept or something with a little a little edge to it instead of just angst

Welp, I enjoyed this issue just fine. In particular the sequence drawn by Jim Cheung and especially the scenes with Rose in space. They were beautiful.

I see this mini as more of an introduction to prominent characters in the upcoming ongoing than it being it’s own standalone story that takes place before the ongoing series. It gets the heavy lifting out of the way so the reader can get right into the meat and potatoes of the initial arc. Some one-shots and small mini-series are like that. Maybe we’ll see Millennium from that POV as the regular series progresses.

In any event, I liked Millennium and I’m eager for more of the new Legion.

We definitely need an “ongoing” LoS thread when the series launches. Think there could be some strong reaction both positive and negative. And again, what’s up with Timber Wolf, grrrrr?

If any of the characters like Batman Beyond, OMAC, Tommy Tomorrow, etc return in the main series, I’ll agree with the heavy lifting part, but as it stands, I don’t see why we couldn’t have just started with the Legion meeting Rose/Thorn from the get-go with flashbacks to her time as an immortal when needed

Dang it, forgot to add the question mark in that last comment