🌋 The Lazarus Planet Discussion Thread (Spoilers; We Once Were Gods Drops 1/24) 🌋

I will be reading this as it comes to Ultra. Sounds like most of you are enjoying it. 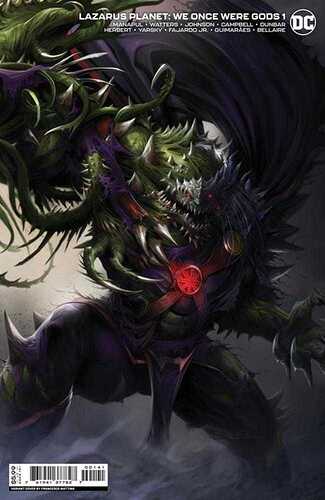 I got the Mattina variant cover for this one. Haven’t read it yet but looking forward to it and Action Comics #1051 later tonight.

I won’t spoil the Martian Manhunter story in We Were Once Gods, but I still want to say that it’s a fantastic story. Dan Watters has only worked on two stories involving Martian Manhunter but so far I would consider him my favorite writer on the character since Ostrander.

The Martian Manhunter story songs of pain has a surprisingly horror aspect to it with the hybrid Martian Manhunter bringing a body horror vibe to it. It’s short but it’s really good.
I definitely want to see more of Dan Watters writing on this character. Fingers cross for a ongoing in the future.

Did the ending of the J’onn story indicate that it would continue this year?

Unfortunately no. It seems like a one and done.

I took a look through the Lazarus Planet books, and one of the reasons I’m so salty about them right now is that it feels like the vast majority of them are 10 page previews for upcoming books that you have to pay for.

During the bronze age, it was still possible to tell a complete story in 10 pages.

It still is - I’ve seen several good short stories in backups and Black and White and other venues in the past several years. I’m not of the opinion that Lazarus Planet is doing so very well.

You’d be welcome to do so, as spoilers are most definitely allowed here.

We Once Were Gods is next in my stack, and once I read it, I’ll give my spoiler-laden thoughts.

Wanted to give it a day before possibly talking in detail about the Martian Manhunter story, so far, it’s my favorite story in the one-shot. The other stories are fine, but since they lead to a spin-off and or continuation of a much larger story, I wouldn’t call them as enjoyable.

Songs of Pain is about empathy in its own most literal sense. The Martian Manhunter has a new ability established with able to use a new sense of empathy power where he is able to read the emotions of people, he understands pain and joy as a constant on earth, but on the night of Lazuras night, people were suffering all around the world, scared and in pain with these new powers. However, curiously, the people of Metropolis did not have this concern and that was mostly because of a newly powered individual who has empath powers and is able to take anyone pain away. The downside is that it seems to have a negative effect on him as well and that causes him to attempt to take all the pain away of Metropolis. It’s where he accidently takes in the memory the day Doomsday arrived in Metropolis and it seems it is enough for Doomsday attempt to reforge himself. Martian Manhunter tries to help the man by taking that pain away, but it causes Doomsday to attempt a psychic resurrection through Martian Manhunter powers. It almost works until the empath is able stop that astral manifestation of Doomsday by absorbing him and causing the empath to die in the process. Martian Manhunter later meets up with superman telling him that the empath had gave everything up including his own life to save MM but also make sure no suffered from the pain of Doomsday anymore. Martian Manhunter stand above the earth’s atmosphere, contemplating that without the Empath, there are no new songs today.

Martian Manhunter has been someone who’s able to fine a middle line between heroic and tragic and this certainly shows. Much like the empath, he is able to relate to the suffering of others, the empath to MM is just a simple man, no greater than he is yet he saved the world by stopping Doomsday. The ending where he is with superman is beautifully sad. Two of the most power people in the world are standing above the planet but not as a sign of superiority but one of helplessness, where they can’t do nothing to stop the random chaos of needless tragedies like this. 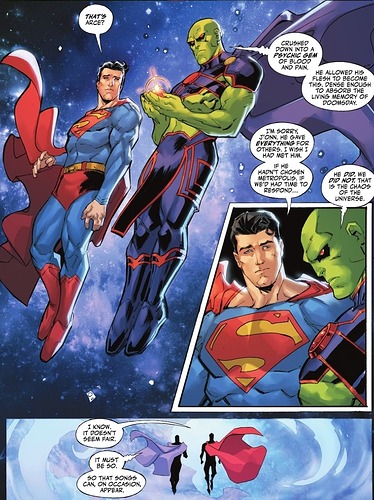 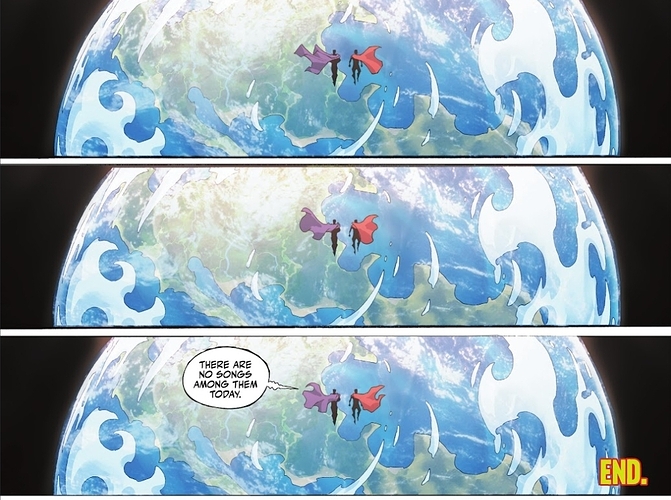 The 20 anthology stories (10 pages each) in the middle of lazarus planet seem to be leading to some things. Not sure where martian manhunter will end up next. Dreamer and Mercy Graves maybe will get solo stories in action comics. Wonder Woman family seems to be getting a new title (maybe sensation comics). The aquaman title is probably an aquaman family title. Sharing of titles can be done 1 issue 1 story like in the current wonder woman title (diana and yara) or can be 1 issue more than 1 story like the Hal Jordan title with John Stewart as the back up story.

We Once Were Gods was…eh.

My favorite story was the return of Billy as Shazam, especially when he turns to look at you with a smile, then belts out “Shazam!” oh-so triumphantly.

The Martian Manhunter story was pretty rad, too. While it says “End.”, I’m hoping we see more of J’onn in the not-too-distant-future.

The Aquaman story was just there. Loved the art, but story-wise, it didn’t offer much.

Wonder Woman’s tale had nice art as well, but again, not much to offer in terms of story.

Speaking of Wonder Woman, where was Yara Flor in this issue? She was on the A cover, but nowhere to be seen in the actual mag itself.

Shifting gears to Assault on Krypton, I very much enjoyed this book (Big surprise I liked the Superman book. Who’d have guessed, right?

). Good stories (especially Mercy’s) and overall, it was a fun package.

I’m thinking of reverting back to my original plan for Lazarus Planet and reading it as it comes to Ultra.

I enjoyed the Alpha and AOK one-shots, but We Once Were Gods served as a reminder that while I like weekly events, I was never really that into Lazarus Planet enough when it was announced to say “Yes! That is something I will buy as it comes out.”

I bought the Alpha book for kicks and enjoyed it, then yoinked the Superman-esque issue (which I was always planning to buy, anyway) and being that I really dig Yara Flor, I figured she’d have something to do in We Once Were Gods…which she didn’t, unfortunately.

Again, I’ll finish Lazarus Planet as it comes to Ultra. Its been okay so far, but its really not something I want to buy when there are plenty of other titles I do want to buy instead.

Yeah, they all seem to be advertisements for upcoming series, which is where my salt comes from.

In all fairness to Lazarus Planet, it isn’t the first to serve as mini-ads for upcoming titles.

The Brave New World one-shot was practically nothing but that, and I’m sure the list grows from there.

which is where my salt comes from

My salt comes from the food jobber/grocery store.

You should try being as salty as me - it really saves on grocery bills!

I don’t mind when either the advertisements are full length stories (like Future State was) or are very cheap (like the DC Nation triple shots were several years back). But when you charge a large amount like Infinite Frontier #0 and Lazarus Planet do for very short incomplete stories, that is where I get quite irked.

You should try being as salty as me - it really saves on grocery bills!

I bought four different varieties of Cheetos yesterday at the food jobber. They had a sale where if you buy two or more, you get 'em for two dollars each.

Not a bad way to save a few bucks on my own food jobber bill, if I say so myself.

I get quite irked.

Peeved and/or miffed too, Seinfeld-style?

Yara Flor and Artemis on covers are maybe clues that they might be in the 2nd Wonder Woman title. Jackson Hyde in a cover probably means he will also be in the Aquaman title. The cover for Lazarus Planet Legends Reborn is a bit weird bec they replaced Harley Quinn with Gar Logan tiger on the cover (maybe they wanted more titans members on the cover). I have no idea why a Firestorm story might need Harley Quinn.

I have no idea why a Firestorm story might need Harley Quinn.

As an ardent Firestorm geek, I would love to see a tale with him and Harley. The possibilities for fun are infinite.