Hail! Hail the House of El! General Zod and the other baddies can go straight to hello, it’s time to start a new season of Krypton! Season two has Lobo, several returning characters from season one, a shift in the paradigm of the ruling power of Krypton and Lobo.

I’m posting this nice and early, so that it’s ready to go for when Krypton fans on the east coast see the season premiere tonight and wish to discuss it at their leisure afterward. Hours later, the rest of us who get a kick from Krypton can jump in and we’ll all have a super time!

Once you’ve seen the premiere, let your kryptonian flag fly high to talk about this week’s episode in full, and I do mean FULL details. 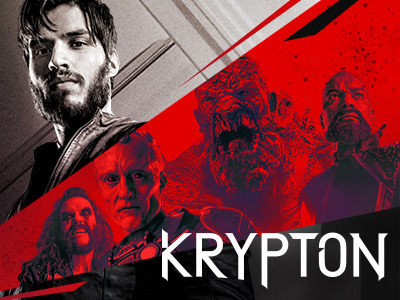 hurdles over Don-El’s KS2 thread in a friendly manner

Anything good on tonight???

Oh, I don’t know. I hear there’s something of worth on the…Siffy Channel? What kind of a name is that for a TV channel?

Enjoyable first dose of the season. A couple of great scenes and a surprise or two.

Adam’s great in this episode, with some great lines, though I believe to this day that the part of the time-traveling scamp was originally intended to be Booster Gold . Seg looked a little like Jon Snow in one scene with the scruffy beard and all, but getting out of the Phantom Zone was a wee bit too easy for my tastes. And poor Nyssa - I was hoping she’d get some answers. We didn’t get to see much Lobo, so I’ll withhold until I have a more concrete opinion.

Hyped for the rest of the season!

I didn’t expect to see Brainiac smashed up!

The phantom zone is like a beautiful, but awful prison. I loved looking at it.

As soon as I heard “Reconditioning” I screamed Noooooo!!! I didn’t know what was going to happen but I knew it wasn’t good (I remembered that term from Man of Steel).

General Zod is so good. I want to hate him, but it’s hard to.

“Light Years From Home” wasn’t at all the premiere episode I was expecting, as I thought we would pick up the story almost immediately after the Coda of “The Phantom Zone” and that Season 2’s “mega arc” would be as tightly focused on the fight to stop Zod as Season 1’s arc was on trying to stop Brainiac, with there being a buildup to Adam escaping “bottled Earth” and Seg escaping the Phantom Zone, but that’s not at all what we got and so now I have no real idea of what to expect.

Given how much time we spent with Dru-Zod in Season 1, it’s hard not to root for him a little bit even as he subjugates his own people and literally brainwashes them into compliance, which is an interesting place to be in with a character who’s not only intended to be the season’s Big Bad, but also a direct analogue to certain current political figures.

We’re also in that same boat with Lyta, who has done a complete 180 from the character we got to know in Season 1 but still remains someone we as an audience can’t help but root for even as she does terrible things.

Something that kept bugging me throughout the episode was that I didn’t recall Sela-Sonn/Jax-Ur having a mechanical eye during Season 1 and so I kept waiting for the show to explain itself in that regard and it never did (congrats to Hannah Waddingham, BTW, on the promotion to Series Regular). I also spent a good chunk of the episode waiting for Dev, Kem, and Jayna to show up (since their actors were credited as Series Regulars) and they never did.

I touched on how the episode as a whole wasn’t what I was expecting, but I want to drill down on a few specific “bullet point” things that I definitely wasn’t expecting:

Given that I have no idea where the story is headed, I can’t wait for the rest of Season 2 to unfold, because if Episode 1 is a true herald of things to come, we’re going to be in for quite a ride and Wednesdays can’t come quickly enough.

The whole season could be done in the Phantom Zone

I loved it, just…mmmm! Loved it!

Jax-Ur was a nice surprise. Pity about her eye though.

I agree with the observations on the Phantom Zone’s depiction, it is unlike any version seen before. I also felt there was a quality of haunting beauty to it. Great production design there.

Seg and Brainiac’s brief time together (so far) was entertaining. It’s always interesting to me to see characters who are bitter enemies exude civility towards one another.

Their scenes reminded me of when Superman and Lex (to name another rivalry in the Superman lexicon) are at ease and can have a conversation. They hate each other, but at times you get the impression they’d rather be sitting down and calmly working out their differences than be locked in their respective neverending battles.

I was glad to see Brainiac get his head bashed in. We know it won’t last, but every defeat of that arrogant worm is a victory worthy of celebration.

Adam’s return was fun. He and Seg reuniting felt like a reunion between brothers. Well written and acted on everyone’s part. My favorite line of Adam’s was “Hey buddy. Is it just you or is the rest of the KISS Army over there behind the-”. Pity Lobo had to cut him off as he did. You know, I bet The Main Man would like KISS. Speaking of…

LOBO!!! Oh boy, he only had a skosh of screentime, but it was good! I loved the “S***head” proximity alert device. He’s got the chain, the metal skull crotchpiece, the look and from what we saw in this episode and the preview for next week, everything else down and down pat. “Stay. Good boy.” Frag yeah!

If the talk of a Lobo series does indeed manifest into something real, I will be absolutely onboard for it in every way!

In the “Set your DVR now” preview of forthcoming episodes, Adam says off camera “You ready to get back to Krypton?”, which was then followed by him and Seg both flipping off the camera while smiling, with Adam saying “So long bitch!”. I’ll bet that’s aimed at Lobo…

Lastly, Nyssa. sigh. So, so pretty. That voice!

This week was really, really good stuff. I’m hyped for next week already! Between new comics, the Legion Book Club and Krypton, Wednesday is the Day of The Week for me.

SN: did anyone who watched on cable see that the episode was aired on USA for some reason? I wonder why that was.

sits back and lights a cig
“was it as good for you as it was me!”
I really enjoyed it and am pumped for this season even more. Favorite parts:

The phantom zone. very interesting choice and quite beautiful looking. Also while I would like to see more of it I am glad they didnt let it be something that dragged on.
Adam Strange! his is great in this show. best line “Hey! I am always fully Cocked!” along with Kiss army joke as well.
Lobo my main Man was absolutely awesome don’t know what else I can yes.

Curiosities:
why is Lobo on Colu, and what will they find there.
Lyta: will she continue down this dark path. Will she betray her son. when will she become pregnant with Zod. What will be Seg’s reaction to what she is doing.
What the heck has Doomsday been up to for 6 months!?

@Aquamon I chuckled at Adam’s fully cocked line. To quote Seamus McFly: “That was good.”

Lobo being on Colu…can’t guess why. Either hunting a bounty or hiding out. I wonder if Dawg will pop up on Krypton. If not here, then maybe in his own show.

As per Cameron Welsh, Lobo’s reason for being on Colu is bounty-related and will be explained.

Watched tonight, strong start to the season. Jax - ur rocks, eye patch and all. I was actually enjoying Seg and Brainiacs tet-e-tet. The “big green twelfth intellect ass” was almost playful and funny. Adam kinda was lost near the end of last season, but coming on strong here with the red jacket.
Zod. What a great villain. He has a point of view that’s wrong but from his perspective defendable. He cares about Krypton, just has a really bad way of showing it. Good stuffs coming ya bastiches.

I’m glad everyone has enjoyed the premiere. If we’re this happy after the first episode, just imagine the euphoria to come as the season progresses.

dude, you guys, Episode 1 of S2 is on DC Universe right now what is happening

@manifest The homepage says that season 2 will have a free preview through July 2nd.

There are no specifics as to whether it’s just the first episode, or the episodes that will have aired prior to the indicated date. By July 2nd, we’ll have three episodes of season two.

Who’s your favorite villain in Krypton?

yeah I understand there’s no guarantee of more episodes but, what a surprise; by the light of Rao that was an amazing S2 premiere episode … not least if you’re a fan of Superman, gods of thunder, Jack Shephard, or Han Solo

Doing any more of these for Krypton Season 2, Vroom?