The Kitchen. anybody know anything about the upcoming movie?

So There’s a upcoming Film Called The Kitchen based on The DC Vertigo comic of the same name The Kitchen. I haven’t seen much but a single trailer. Is it a limited release or something? 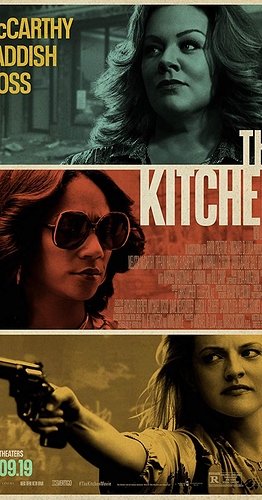 As far as I’ve been able to see, releases wide on Aug 9th.

I’m looking forward to this. Love Melissa McCarthy and the comic was fun.

Not a limited release, the marketing for The Kitchen hasn’t come out in full force yet.

Looks like a good flick. The series (singles and the trade) is part of Comixology Unlimited as well for those interested.

I read it on Comixology Unlimited a while back, a really solid crime story, and while the trailer implies that it’s added a few extra jokes in there, it feels pretty faithful to the original book.

Also, a pretty cool thing is that The Kitchen will apparently be a part of the “AMC Artisan” line when released in theaters, basically the theater company hand-picking more independent or just really good and small films to promote them.