For those who came in late, a history lesson:

Kenner is arguably one of the most famous toy companies of all time. While their history prior to the late 1970s is quite interesting, it’s their acquisition of the toy rights to a little movie that everyone in the movie and toy industries thought of as an impending all time cinematic disaster that truly put them on the map. A little movie called Star Wars.

Fast forward to 1984. Return of The Jedi has been released, George Lucas says the franchise will go on break for the foreseeable future and while their Star Wars toyline would continue into 1985 (all attempts to extend it past '85 would fail), Kenner is hungry for a new franchise that is overflowing with heroes, villains, aliens, creatures and vehicle and playset ideas galore. Enter their acquisition of the DC Comics license.

From 1984 to 1986 Kenner produced the Super Powers Collection toyline consisting of action figures, vehicles and one playset (the other playset on tap never made it into production). While the line was highly successful, sales dipped after the third series of action figures and the line ended before the fourth series of figures and other franchise specific items (think a Titans Tower playset from The New Teen Titans, a phone booth for Superman and a Bat-signal for Batman, among other verified examples of in-progress items) could be released. Kenner’s DC license ended and there would be no DC action figure oriented toys on the shelves until 1989.

Fast forward to 1990. New kid on the toy company block Toy Biz has had the DC toy license for a year and produced action figure product for the Tim Burton Batman movie as well as DC in general in an accompanying line entitled DC Comics Super Heroes.

Kenner reacquires the DC license and in that same year begins a very long tenure with it as they release The Dark Knight Collection toyline based on the Tim Burton Batman movie.

Fast forward to 2003. Hasbro is now the name stamp on mass market released DC action figure based toys. They acquired Kenner in 1991, however the Kenner label would endure until 1999 when Hasbro dissolved it in favor of their brand appearing on all products formerly under Kenner’s purview.

Mattel, the world’s largest toy company at the time, is eager to re-enter the boys toys arena and after having re-introduced the Masters of the Universe brand a year prior in 2002, they acquire the license for the Justice League TV series, and all things pertaining to Batman and Superman. The Kenner/Hasbro era comes to a close in 2003 with the release of the Toys R Us exclusive Girls of Gotham City action figure four pack.

So…now that I’ve given a brief history on the Kenner/Hasbro era of DC toys, let’s talk about your favorite lines, figures and other items from it. While very, very heavily focused on Batman, the good folks at K/H did manage to squeeze in product from other DC properties as well in assorted lines such as Superman: Man of Steel (no “the” in this case), JLA and DC Super Heroes for example.

The floor is yours

Check the podcast Geekfest Rants. They have a bunch of episodes on Kenner collectables and toys. The whole podcast is dedicated to toys, figures, and pop culture movies etc.

I mentioned in a comment on another post how my sister bought me a bunch of the Super Powers figures for my 7th birthday. The ones I can remember are Superman, Batman, Wonder Woman, Firestorm, Hawkman, and The Flash. I could swear there was more, but the fact that I remember those most vividly probably means played with them the most. Also remember getting a Supermobile as part of that gift. For a 7 year old, it was heaven. The “power action”, while cheeky for an adult, actually resulted in hours of make-believe battles. Fun times. Would definitely like to see them reissued.

Forgot Aquaman…he was part of that bday gift as well.

@Horizon_Brave Thank you, I shall check that out =)

@moro Super Powers is just the best. Kenner nailed it the first time out for sure.

Since he’s on our minds ATM, I’d like to point a leaf of appreciation towards Kenner’s Swamp Thing toyline.

Largely based on the cartoon, it featured six versions of Swamp Thing, the Evil Un-Men (Anton Arcane, Dr. Deemo, Weed Killer and Skinman) and heroic allies of Swamp Thing Tomahawk and Bayou Jack.

There were also three vehicles, an Un-Men transducer playset and a swamp playset for Swamp Thing.

Gosh, where to start?

From my earliest childhood memories, the name Kenner on the side of the box was a guarantee of quality. The Six Million Dollar Man and Star Wars lines cemented this fact in my young head. But when Super Powers came along, I fell madly in love.

I was in my teenage years. I thought I’d outgrown toys. But that Hal Jordan Green Lantern hanging on the peg in the K*B Toys in the mall called to me. They’d never made him during the Mego era; I’d never been given the opportunity to own a GL action figure before this moment. And look, he came with a lantern! And a teeny tiny comic book! And so, with my hard-earned allowance, I bought my first toy in years - an act that opened the proverbial floodgates to a lifetime of collecting.

Highlights from the Kenner era? Finding a Batman Returns Catwoman at Toys R Us. Driving all over town searching for Total Justice figures. The Batman: The Animated Series Wayne Manor/Batcave playset. Man of Steel’s insistence on obscure villains like Massacre and Conduit. Oh, the short-lived 9 inch cloth costumed silver age figures that hit the Mego nostalgia. And yes, I even lurved the Swamp Thing series.

But in the end, Kenner never re-achieved the glory days of the Super Powers Collection for me. It’s my most prized display, missing only a SP Batcopter.

As an aside, I keep hoping that Netflix’s The Toys That Made Us will do Super Powers eventually.

There’s no question Super Powers is the best, but shout out to Toybiz’s Superman that looked nearly identical to Kenner’s, but came with a kryptonite ring that used magnets, so when you held the ring up to Superman, he’d fall over. One of the best, most imaginative action features ever.

The Toys That Made Us MUST do a Kenner episode at some point. So many kids (and kids at heart) loved and still love that better than all others Kenner brand. I’ll take a whole season devoted to Kenner.

A few days later, my dad took me to Kay-Bee Toys and I got TS Batman and the Toy Biz Joker. I don’t know why I went for a non-movie accurate Batman (instead of Crime Attack Batman), but he appealed to me for some reason.

I’m from that old guard (so much I understood your Phantom reference!). Kenner toys were always my favorite. I had many of the Star Wars series (figures and playsets), Indiana Jones, and Super Powers (Hasbro’s G.I. Joe were also cool… but that’s for another story). My first superpowers figures were Superman (which I still have) and the Flash. In 1990, when Toy Biz brought the DC Superheroes license back, I was disappointed as to how much ‘cheap’ those toys were in comparison and how little (if anything) they had improved,

I always wanted to buy the Batmobile (or Batmissle) from The Dark Knight Collection, but never got to it. I have seen it pop up several times on eBay, but it’s very pricey and -today- there are just better collectibles out there competing for the budget,

Years later I moved to Cincinnati (where Kenner was based), but unfortunately the company had already been acquired by Hasbro and closed. However, fun fact, I learned that the design of the Hall of Justice (used in the Superfriends cartoon, and the Super Powers toys) was based on Cincinnati’s Museum Center -which is a block a way from where Kenner’s original HQ used to be. The museum is still there, and it’s a great attraction for tourists to get pictures with the Hall of Justice in the background. I wish in future DC film would bring this location back (the CW shows have use it sporadically), or that at least use the setting when filming the Super Powers show for The Toys that Made Us!

Kenner was my preference, too.
I had almost all the Super Powers figures and a large collection of Star Wars figures.
But lost them all in a move.

Today, I still have a Boba Fett and a Joker.
And a Catwoman from Batman Returns.

I actually had been on hiatus from all things Super Hero at the time the Super Powers Collection came out. When I jumped back on following Batman 89 I was able to get the 11 Iconic heroes of the Justice League along with Robin Captain marveland Dr. Fate at the many comic conventions and Mall collectibles shows I came upon in the early 90s.
While some of the subsequent lines left me feeling underwhelmed I was a big fan of the Total Justice/JLA lines. (True, the pre-posed nature of the figures was a little disappointing, but they had a fantastic variety of characters and they had the most recent incarnations of characters… (post Zero Hour Hawkman, Spear hand Aquaman, Wally West Flash, Kyle Rayner Green Lantern, Connor Hawke Green Arrow) Some of the newer characters that were just hitting the comics. (Zauriel, Impulse, Steel) and others who had been around but hadn’t gotten made into figures… (Blue Beetle, Atom, Huntress) I still have a large collection of all of these.
Of course that didn’t stop me from making some custom characters. I took the Sue Storm and Spider Woman figures from Toy Biz and repainted them to look like Fire and Ice. I was planning to turn Superman blue into Booster Gold but couldn’t find an eye visor that would fit the face properly.

The early 90’s was probably the best time to get Super Powers toys at cheap post-retail prices. The line wasn’t that old and it obviously didn’t yet have decades of appreciation behind it, so the deals that could be had then are very interesting to imagine.

I still hope that one day when I hit a garage sale that’s laden with toys, I’ll come across a box or two of gently used loose and complete SP figures, or a box of packaged figures.

Fat chance in the eBay era…I know. A Kenner fanboy can dream though =)

I’m old, old school, so Kenner and their tiny 3-4 inch figures are still the “new” toys to me and my beloved MEGO figures.

(Of course, I came around to the 6-inch scale, Mattel DC Classics and Universe figures when they came out too.) 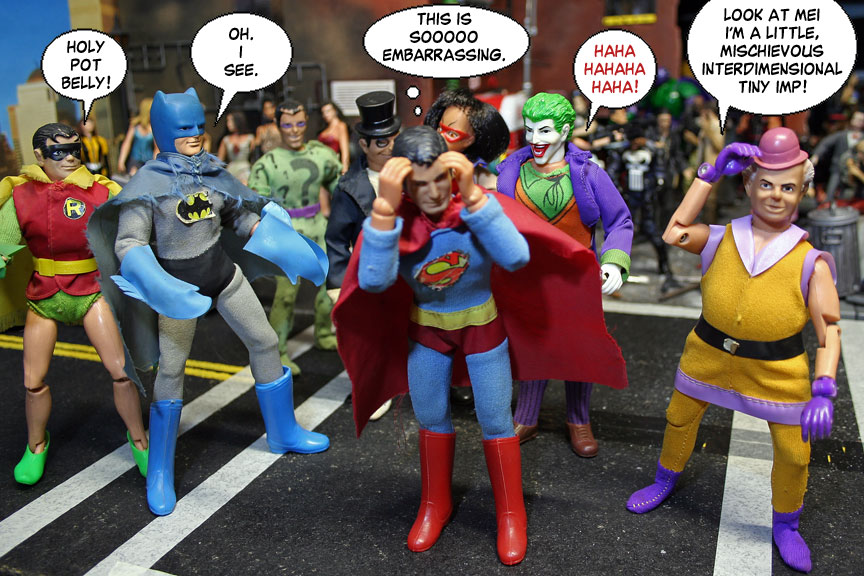