I recently finished the trade of the Batman: Kings of Fear mini-series, which was written by Scott Peterson and drawn by Kelley Jones.

Who’s Kelley Jones you ask? He’s one of the most unique artists in modern comic book history, especially when it comes to his work on Batman.

His association with The Dark Knight spans original graphic novels (The Batman & Dracula Trilogy), cover art (his first for the Batman series being Batman #491), cover and interior artwork (beginning with Batman #515) and mini-series such as Batman: Haunted Gotham, Batman: Gotham after Midnight, Batman: Unseen and most recently, the aforementioned Batman: Kings of Fear, issue #1 of which has recently debuted on DCU.

Jones’ Batman is very distinct as he tends to draw him with a slightly elongated body, a massive cape, clawlike hands and highly exaggerated cowl ears. His rendition of Batman is one you will definitely not mistake for that of another artist, as you know his Batman when you see it.

Returning to the Batman: Kings of Fear mini, I loved it, just loved it. It may just be the definitive modern era Scarecrow story and at minimum, it’s certainly one of the best Scarecrow stories ever. I’ll refrain from further details so as to not spoil anything, but if you like Batman, Scarecrow and/or stories that examine the worth of Batman’s war on crime, you should definitely read it. Again, the first issue is currently available in the DCU comics library.

Upon finishing Batman: Kings of Fear, I was immediately hungry for more of Kelley Jones’ batwork, so I began re-reading his run on Batman with writer Doug Moench (with whom Jones worked with on Batman: Unseen as well), which is also available in full in the Comics section right now.

This run (again, it began in Batman #515) was hit and miss with me for years as I wasn’t an immediate fan of Jones’ rendition of Batman. I remember seeing it as a kid/borderline teenager and thinking “Why does Batman look so…odd?”. I mostly skipped Batman during that time and looked to the other Batbooks when I was jonesin’ for my fix of that Caped Crusader mix.

Enough pontificating on my end, what do YOU think of Kelley Jones and his take on The Dark Knight? Do you have a favorite story/series that his vivid pencils have brought to equally vivid life? Are you brand new to his highly unique vision of Batman and want to know more about it?

Spread your cape below and let’s discuss one of the most wonderfully unique artists in Batman’s 80 year history. 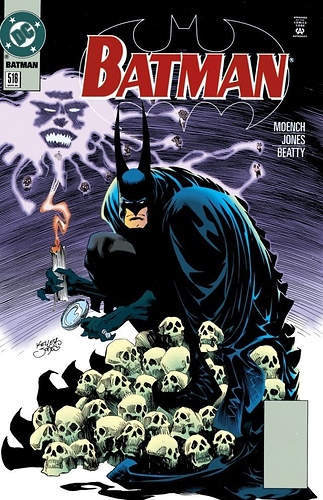 I love Kelly Jones, and also think King of Fear is one of the best Scarecrow stories ever. My favorite Bat-work is the story featuring Killer Croc and Swamp Thing. Non-Bats, my favorite Jones work is from Sandman.

I’ll have to check out his Sandman work. I imagine it’s quite the sight.

I love to see his work on the cover of a comic. My enthusiasm for seeing it inside the comic is not so strong.

I just read his and Doug Moench’s two issue Batman & Spectre story (Batman #540 and #541) and loved it. His unique style was perfect for the Spectre and really helped sell Jim Corrigan’s intrusion into Batman’s world of Gotham City gangsters.

@mrmiracle The Batman and Spectre story was a highlight of the Moench/Jones run. Speaking of their run, have you read The Deadman Connection? It’s quite good.

While not Batman related, Jones’ work on the 2016 Swamp Thing mini-series (with Len Wein) was wonderful. I’d love to see him do more Swamp Thing material.

I like his art, but it’s not the best for a comic. For covers it’s great, but in the actual comic his characters’ weird proportions make reading it weird. He is really good at creating an eerie, gothic atmosphere though.

I have a love-hate relationship with Kelley Jones. I think he’s incredibly talented, don’t get me wrong, but at the same time I’ve read comics of his where I pored over the pages, admiring every detail, and others where I’ve found the visual style downright ugly. It really depends on the book. His stuff on Sandman was good, as were his Deadman limited series, but I was never really able to get into him on Batman, I don’t know why…

Excellent shoutout to a fine artist. I first saw his work in Doom Patrol. He’s much admired.

@Vroom I haven’t read The Deadman Connection, but I’ll add it to the list!

I concur with those who say Jones’ art excels in certain aspects, but flounders in others.

Batman, regular people and other things can appear fine, but then you flip the page and another character comes into a scene looking blobby and well, odd.

I read an issue of Batman recently where the Batmobile was prominently featured in a scene and it looked more like a clown car than the greatest and most badass muscle car of all time.

Jones’ strengths definitely outweigh his weaknesses. In my re-read of the Moench and Jones run of Batman, I’ve very much come around to his take on The Dark Knight.

Love it. His Deadman comics were my 2nd favorite part of the on site run/thread I posted. Strange Adventures were only ones I liked better & Neal Adams is tied with Kelley for 2nd favorite after those.