The July Walmart Giants Are Out!

Saw them at two different stores tonight (Friday), so they’re out and about for those interested.

Tom King and Andy Kubert’s Superman is a gem as is Gail Simone’s Flash.

SN: Sorry if the picture’s grainy, it’s from eBay. 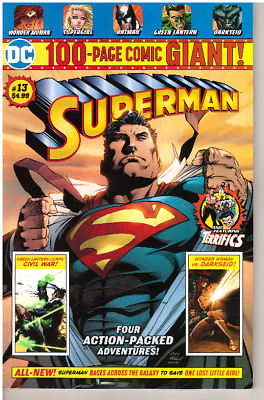 These end next month to make way for the new number ones available everywhere. Is is just me or is the Tom King Superman not gonna wrap up?

@gameluvah Oh, they do? I hadn’t heard about that. So all of the books are launching at #1 in September?

As for King’s Superman, it might wrap up by next issue. If all that’s changing in the line is the numbering, then the stories could continue on as they did when JLA was retitled to Wonder Woman and Teen Titans became Titans.

If you have more information on these going into September, I’d love to hear it.

They are no longer Wal-Mart exclusive and the August issues are it. Everything is getting relaunched in September with new #1’s and being sold everywhere in addition to Wal-Mart. Such as comic stores, Target,etc.

It’s my understanding (but not clarified) that all the new #1’s will start fresh so to speak and not continue on from the Wal-Mart runs to entice folks to the new #1’s. Here is a link to a story about it although not much info is given.

The blurb for the next issue of Wal-Mart Superman says the 12 pager is a “one off” story so who knows.

There are more to come as well…

@gameluvah Wow! That’s great, looking forward to those. Thank you so much for the details.

Are the on-sale dates you mentioned just for comic stores or is it known if those dates apply to Target, Walmart and the like too? I wouldn’t mind switching things up and buying this new run from Target.

@Vroom at this point I don’t know. Only comic book store info has been released so far. I also hope they give us a least a vague idea of the contents before they come out.

What are these? I don’t understand.

@BatWatch Walmart has exclusive 100 page comics that contain reprints of older DC comics and one new story. There are multiple series and they release monthly.

I think DC is rereleasing them in other places with new covers starting September, but I’m not sure if those giant comics are supposed to be the same ones as the Walmart ones or not.

@BatWatch The Walmart exclusive line of 100 Page Giant comics are monthly releases priced at $4.99 with each title featuring 1 brand new story, and 3 reprints that are largely culled from the last decade and a half, however there are select instances of older content from decades prior being reprinted too.

In February of this year, the line was retooled. Justice League of America was retitled Wonder Woman and renumbered at #1. Teen Titans was retitled Titans and also began with a new #1 (the content from issues under the JLA and Teen Titans titles carried on under their new monikers). Titles starring Swamp Thing and The Flash were added to the line while the Superman and Batman series continued on with no changes. Next month looks to be the end of the Walmart exclusivity as well as that assortment of titles.

As @gameluvah detailed earlier in this thread, September will see a brand new line of 100 Page Giant books that consists of a much larger assortment of titles, all starting at #1 and featuring 24 pages of new content as opposed to the existing 10-13 page count in the Walmart line.

This new assortment of books will be available at Target, Walmart and other mass market accounts while also being available to direct market comic book retailer accounts and presumably on the digital market as well. The mass market editions will feature pre-existing cover art while those in the direct market will sport new cover art created exclusively for them.

These books are a fantastic way for DC to expand the awareness of their comic books and assorted characters/franchises in general to audiences that are dramatically larger than the comic store/fan crowd. Make no mistake, these books are highly enjoyable and recommended to the established fans too.

It also bears mentioning that select earlier new content from this line has begun to see release in digital form via the Superman: Up in the Sky, Batman Universe, and Wonder Woman: Come Back to Me series. The new Teen Titans content will soon be reprinted in digital form as well.

That’s great. It’s nice to have direct marketing again. That’s been completely absent in most stores for the last fifteen years, but it was a gateway drug for me and countless others. The price point works because they don’t have to pay for most of the stories just the reprint cost.

Anybody know if the exclusive new comics will be coming to DCU?

@BatWatch I imagine the series that are reprinting the new content from the Walmart books will be on DCU as they hit their respective one year anniversaries.

The earliest reprint title to be on DCU would be Superman: Up in the Sky. #1 came out on July 3rd of this year, so the wait will be a long one.

Where are these located. I looked for them in the book section at Walmart today and found nothing.

@BatWatch The Giants are in stores with trading cards and various collectibles up front by the registers. They’re usually in a themed display box.

If you’re at a store that doesn’t have a trading cards/miscellaneous area up front, then that store doesn’t carry the Giant line. In my experience at least, as I’ve never seen them in stores without the miscellaneous merch up front.

Look for this display. The books in this photo are older releases, but it’s the same display the July books can be found in. 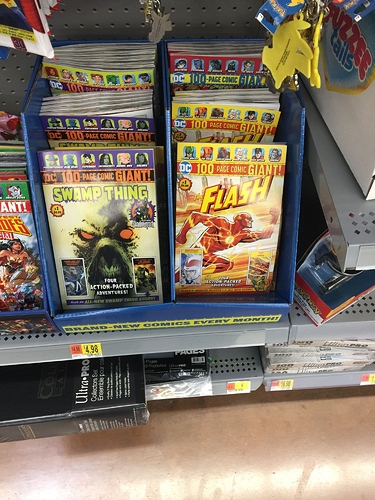 Ah. Interesting. I’ll see if they have them. I won’t buy them because I’m a cheapskate and already have access to so many, but I just love seeing comics and I’m curious about the format.