The Infinite Frontier Era of The Flash: An Overlooked Masterpiece? 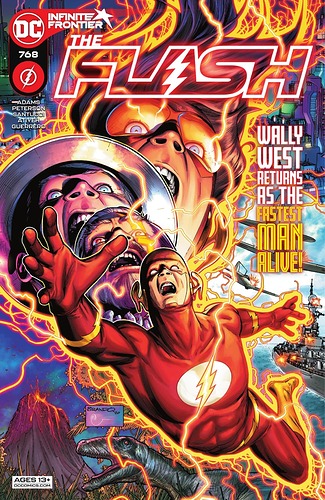 Wally West has resumed his duties as The Flash for over a year now, the book has received a ton of critical acclaim and yet…fans don’t really seem to be talking about The Flash’s current solo adventures all that much.

I bought issues 768 and 769 when they came out and loved 'em (especially Gold Beetle in 769, as she was great), then switched to reading the series on DCUI.

After the War for Earth-3-related issue last month, I decided to add The Flash to my pull list and will now be making it part of my regular reads, once more.

Are you reading Jerermy Adams’ run on The Flash? Are you not (and if you’re not, please address why, as its a really good book

Flash your thoughts below!

It’s fine. The sidebars with Wally’s kids have been my favorite part so far and having Mr. Terrific around is a plus, but I find the comics overall to be merely satisfactory.

This title and Philip Kennedy Johnson’s Action Comics are two titles I’m reading that seem to be getting a lot of popular acclaim and I’m just sitting here shrugging my shoulders as to why.

It’s a great return which shows why Wally West is not only the best Flash but also the greatest legacy hero in comic book history. It highlights all his best qualities, his humor, his family,blue-collar mindset, and his role in the DC universe as one of the most powerful yet relatable people in the universe. The Wally West series should really succeed because Barry as the main flash seems unfair given he was only seen as the main flash because of the CW TV show which itself is not exactly a great representation of Barry Allen.
Barry’s rivalry with Thawne is probably still the best thing about him, but Wally West relationship with his rogue gallery is always more unique, given that he has banter with most of them, revealing they aren’t all evil and some even respect Wally West.

The opening arc was fantastic. It was so much fun seeing Wally bounce around different eras in different speedsters’ bodies, all while building up toward a great conclusion that had plenty of big surprises. Though the issues after that haven’t been quite as good, they’re still very entertaining and interesting, and I usually find myself looking forward to what Adams has in store for Wally next

It’s been fun, solid meat-and-potatoes storytelling. I’m kind of ready for an epic though.

I love it!
In fact it’s the only oncgoing series that I am reading regularly as most of the other series that interest me are 6-8 issue limited series.While part of me does hop that Wally will start having a larger role outside his own title and interacting with the larger DC Universe, I have to be honest and admit that I’m really enjoying the current run as a break from the constant major event after major event adrenaline overload series that we’ve had in the past.

I’m going to have to start reading this! I love Flash but haven’t read any Flash comics in a while, so I’m looking forward to this.

I enjoy this run as I do because its great to see Wally just being a hero and a dad (and enjoying both roles) and free of the baggage of things like Heroes in Crisis.

Plus, this run is pure FUN.

Some people say modern superhero comics aren’t fun right now, but to them I say read Adams’ Flash, because it IS fun and a ton of fun at that.

This is the best book that DC is currently publishing. It’s fun, accessible, and respects Wally West. This book would never have happened under Dan Didio.
Jeremy Adams is killing it on this book and fans of The Flash need to support it.

This is one of those series that often gets talked about in the comics shop but I don’t bring it up here. For the most part, it feels like each issue could be a standalone story, minus a 2 or 3 issue storyline here and there. That has a lot going for it. On top of that, the stories, as many others have mentioned, are fun.

One thing I really enjoy is the family dynamic. There are Fantastic Four vibes and that is a-okay with moi. With the way the last issue ended, I can’t wait to see what is in store for the Wally West family.

I like it. Wally is one of my favorite characters, so it’s great to see him happy with Linda and the kids again. I’m also enjoying his appearances with Dick over in Nightwing.

I’m also enjoying his appearances with Dick over in Nightwing.

Right? The best Batbook got even better once Wally raced into it.