What do you think about a Flash game i think it would be pretty cool to be the flash and run through central city I also think there is a bunch of content to explore in that area. what are your thoughts?

It could be done, but the Flash is so overpowered. I would love it of course.

It could be really fun. He certainly has the rogues gallery for interesting boss battles.

I always wanted to see a 2D Flash game similar to the classic Sonic the Hedgehog games.

I think a full-fledged 3D Flash game could be awesome. You start as Barry Allen (voiced by Grant Gustin), regular guy and forensic investigator. The first stage of the game is getting to know the supporting cast, seeing flashbacks of Barry’s past, and investigating a couple non-meta crimes.

Stage two revolves around Barry gaining his powers, learning the basics, and beginning to fight the Rogues. (Personally, I wouldn’t use Star Labs, like the CW show. It’s just Barry and his family, figuring it out.)

Stage three is a culmination of the fight with the Rogues, which climaxes with Barry breaking through the dimensional wall. In this new universe, he meets Barry Allen (voiced by Ezra Miller).

Stage four is a multiverse romp meetng various versions of the Flash (with hints of the many Justice Leagues, etc). Lots of fan service here. The player learns about Zoom, Reverse Flash, Savitar, etc, and their plan to rewrite ther multiverse.

Stage five is an all out battle through the multiverse’s various timelines, fixing stuff, making stuff worse, etc. The player runs into all sorts of speedsters (various versions of Bart, Tornado Twins, XS, etc). Ultimately, Barry (the player) makes the ultimate sacrifice in order to set everything right.

The epilogue shows Barry’s nephew Wally beginning to follow his uncle’s footsteps. You get a short stage of running around with a burgeoning Justice League. You get to see how Wally is in awe of the other heroes, but he holds his own. (This also sets up sequels and/or DLCs.)

There was a Flash video game for the Sega Master System. 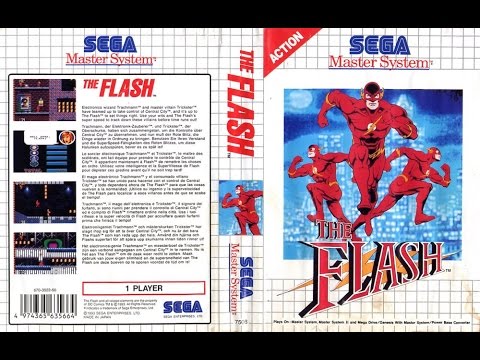