The Elusive Walmart Giant 100 page Titles...nowhere to be found 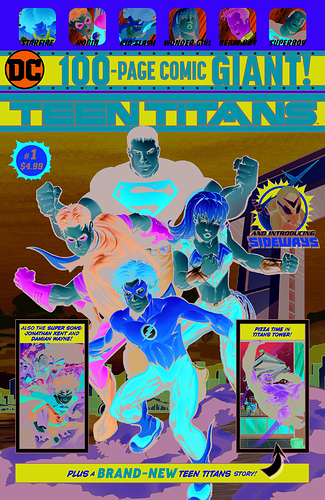 Apparently as per this article back in June, they are where the walking dead/magic/novelty stuff is towards the front of the store. I’ll need to check out my local Wal-Mart’s to see if they have any. I didnt know that they were doinf this.

I work at one, and from what I’ve gathered, an outside vendor handles the comics (they’re in the same place that the trading cards and the like are, usually around one of the registers), and they only get enough for a certain amount of time and the ones that don’t get sold have to be thrown away.

I’ve read on some websites that have been following this (notably ComicsBeat) that DC/Wal-Mart does have plans to eventually have them for sale on the Wal-Mart website, though I don’t know if it’ll be all the issues from the start or if it’ll just start with the newest issues at that time.

Worst case scenario, I believe almost all the reprints are already in trade (there’s a chance that the New Age books like The Terrifics and Sideways aren’t collected yet, since they are the most recent) and the original stories will be collected in their own trades.

I’ve been able to get all of them without too much trouble. Kinda wish that I’d gotten some extra copies now. I’m sure you can probably pick them up on ebay for three times the cover price. I saw the promo for the SWAMP THING HALLOWEEN HORROR GIANT #1 that’s going to be available this Sunday.

It was a problem in my area at first but now 3 local Walmarts are stuffed to the gills with the latest 100 pagers. DC increased the output with the #3 issues.

Except for the first few weeks when the first issues came out, I’ve had zero problems finding the comics. Sometimes they are damaged unfortunately so I have to search a different store but I can easily get them. Is your local Walmart a super center? If not, then that could be the problem as they are only carried in the super centers. You have to find the aisle near the registers with the Pokemon cards, Yu-Gi Oh cards, etc.

Not all Walmart’s have the Giants available. Only a certain amount were given them to start, but it’ll expand eventually

I remember reading that they’re going to expand to more monthly titles, with The Flash confirmed as one, and the other a mystery.

Check by the cash registers

I’ve had to go multiple Wal-Marts to find them and yes @IssacBrown is correct they’ll be in the front by the registers in the trading card section.

Awesome feedback and thanks for the heads both making multiple stops and I will stop by the registers and see if I can find them …they look pretty cool and remind of the giants I use to pick up when I was in my early teens in the 70’s… here’s a link to an article I just finished on DC Universe hope you like it… https://www.linkedin.com/pulse/dc-universe-has-arrived-september-15th-batman-day-begins-nersinger/

That looks kind of nightmareish to type into my computer , what name do you go by in Linkedin, maybe I can find you easier that way.

Or if you know the book club’s Discord site, maybe just post a link there so I can just click on it cuz I’m lazy.

Yes it’s a crying shame how many books and magazines Walmart destroys if they don’t sell. Having to see all those brand new books be ripped up and tossed into the compactor used to be one of the worst parts of that job. I live in a rural area, so I’m doubting the closest Walmart will even have a copy. I’ll find out this weekend when I’m over that way.

One thing I gleaned from Tiffany’s recent rundown: these arrive on Sundays. I keep finding an empty box when I go to my own local Walmart (we have two, but only the one with the full grocery section has the comics), but a co-worker went there at lunch yesterday and checked for me and they had books in stock, so I’ll stop by today.

They have a great big blue displaybox to show them in, unless a Youtuber talked them into letting him/her take it home

I’m not much of a complainer, I read comics to enjoy myself and I don’t typically focus on the negative. With that said, I can’t find this at Walmart either and I’m not sure I want to out of principle. The reprinted material is a great entry point for new readers while the original stories are clearly for the current fan. My problem is that I read all this reprinted material when it first came out. To pay so much for a book of reprints just to get the new story is frustrating to me. I do love the idea of non-comic stores getting back in on selling comics but I feel like maybe there was another way of going about it.

I was able to get the Swamp Thing Giant this weekend. It wasn’t in the usually display. It was in a display by itself on a lower shelf. Just a heads up, because I almost missed it. I read on another site that there will be a Winter Special Giant next month too. If anyone wanted to get a little better indea what’s inside of it you can look on my blog here: https://stabbingstardust.wordpress.com/2018/10/07/swamp-things-halloween-horror-giant-1/

Apparently Walmart doesn’t distribute the comics themselves, a vender comes in and puts them out & for some Walmarts they only come once a week & Walmart isn’t allowed to put any out even if they wanted too. I was unable to get the Swamp Thing issue because of this

Blood Violet how did you get a link to get inserted on your comment?