I was thinking back to when I was a kid and trades weren’t as commonplace outside of comic shops. My dad took my sisters and I out on the weekends and we’d usually end up at Barnes and Noble. While he was looking up his books, my sisters and I hung out at the humor section. Every now and then you’d see a DC or Marvel trade in there.

It was always so exciting because they didn’t pop up often. Sure, if there was a new Batman movie, they’d stock up on a few Batman trades, but overall it was mostly Garfield, Simpsons and Far Side books. Not that there’s anything wrong with those!

They must’ve been popular because within a few years they had their own dedicated section. When I went to other major book stores, they also had a "Graphic Novel’ section (I really hate that term). It got me wondering, though…when do you think the tpb boom hit? I can remember as early as the early 2000s in my senior year of high school when Crossgen had an endcap filled with nothing but trades. It might’ve been sooner, though.

they also had a "Graphic Novel’ section (I really hate that term).

I agree. A pet peeve of mine is when people call comic books graphic novels.

With my knowledge I would say after the book store chain Borders went out in 2011. I recall that big chain used to have those spin racks with the monthly comics on them but once they closed and I began going to Barnes & Noble I noticed the large number of trades and no individual monthly issues but that could just be because they are different stores.

I know it’s become the default for many but it’s a term I never cared for. It’s kind of like people who call professional wrestling “sports entertainment”. Both seem like terms people use because they’re ashamed to call it what it is.

It reminds me of that scene in Lost Boys: The Thirst where this guy comes into the comic store and asks where the graphic novels are. The lady working there tells them the comics are over there and he replies “I only read graphic novels” It’s done in a tongue in cheek manner, but I always liked that scene.

Ah, Borders! What a great bookstore. I was sad when they went out of business. They usually had stuff (both comic and book alike) that Barnes and Noble didn’t have. I miss that place

I built a large portion of my collection through a local used bookstore that had a great section of comics as well as one of the first “graphic novel” sections I can ever remember seeing.

If only I knew about some of the used book stores here in NYC when I was a kid. Granted, I don’t think they would’ve carried many trades back then, but when they were becoming more common, I feel like I could’ve gotten quite a few through a used book store.

Lessee, my TPB/OGN bookstore “journey” began at Hastings in the early '90s with the X-Men: Animation Special (based on X-Men: Pryde of the X-Men): 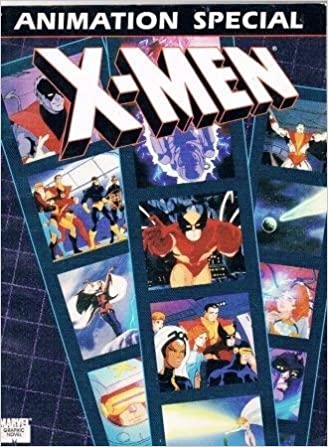 From there, it expanded to Barnes and Noble throughout the '90s. I remember seeing heaps of TPBs then. I also frequented B. Dalton, Waldenbooks and Bookstar in my childhood and teen years, and remember seeing a decent number of trades at each store.

As for when the big trade boom hit, I’d say early 2000s. That’s when Marvel started releasing more and more current titles in trade form in a relatively normal window from their single issue release with DC doing the same around the same time (as I remember it, at least).

Borders was the best in selection, availability and pricing. Barnes and Noble must still think it’s the late '90s, as last I knew, they don’t price match their own site, let alone Amazon and other competitors.

I had that x-men book! This was before I knew it was stills from the pilot—I just thought they had a talented artist lol