:superman: The Death of Superman: Where Were You in '92? :superman:

I wasn’t old enough to be aware of the events. But eventually I found some comics from that time (don’t have them anymore) when I was some years older. Like Superboy, Eradicator, and the one Jonathan is walking through heaven, I forget the exact issues but luckily I have the omnibus.

I was 9. I didn’t have a working knowledge of super heroes in general. I knew who a few of them were because of Adam West reruns and Batman '89 being on in the background while we were at my mom’s boyfriend’s house. I had probably seen some of not all of the Christopher Reeves movies, and the late 80s cartoon. My uncle had died in an accident at some point earlier, and I had been given 4 comics, mostly Marvel, because they knew I would take care of them, even though they were already dog eared by then. The only comics I was reading regularly were the ones in Disney Adventures.

At some point after the fact, I was bored and looking for something in the phone book, when I came across a small ad for a comic shop that used the bloody S, and I asked my mom why the symbol looked bloody, and she said Superman died. I don’t remember my reaction or anything else.

Several months later, my babysitter’s kid gave me a couple comics, one which was Superman: Speeding Bullets, which confused me and kind of scared me away for a bit longer. Eventually, Fox turned me on to Batman and X-Men, and for my birthday, I decided to buy some comics with my birthday money, and bought my first 2 comics at the Rexall, Simpsons Comics #1 and Superman #86.
I eventually found the Death trade for the cover price of $4.95, and slowly built my collection.

Fun fact, for years, I thought the true Superman from Reign was the cyborg, because it took forever to finish finding those issues.

I sentence you…to enjoy those comics.

I don’t have room for this stuff.

You could store some of it in this: 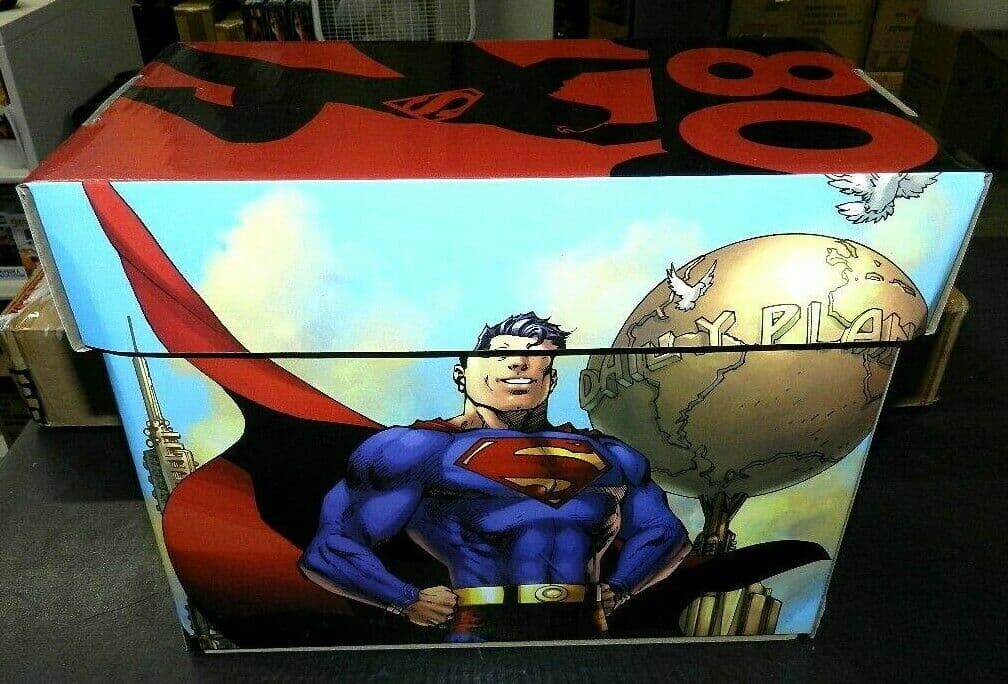 One of my absolute favorite post-Death/Return stories.

I don’t know what it is about that arc, but it hits my Superman buttons just right.

Oh, that takes me back.

I only read a few issues of that mag, but its likely one of the reasons why I love digests (DC’s Blue Label line in particular) so much.

bought my first 2 comics at the Rexall, Simpsons Comics #1 and Superman #86.

This is the first Superman comic I remember buying that wasn’t part of a multi-pack: 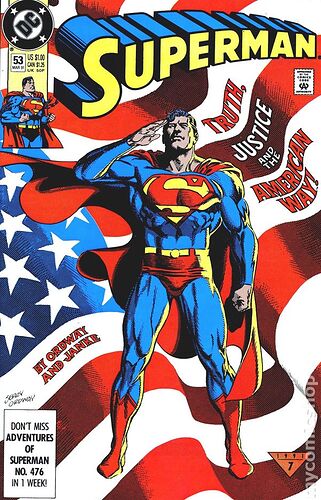 600×933 172 KB
I bought it from the Woolworth’s spinner rack, which was my first regular go-to for comics, as I remember buying issues of Wolverine from it as well.

Whenever I went to Woolworth’s, my to-do list was:

As I slowly spun the spinner rack and my four eyes poured over the wonder on display, I frequently thought “I want all of these.”

I had a good allowance, but not that good.

So, who’s read the Anniversary Special, and what’d you think? Spoilers are absolutely allowed, so go in-depth with your thoughts, please.

Nice! Did you get new books in the mail at the same time they hit the shops, or was there a delay?
There was definitely a delay, but that didn’t bother me.

There was definitely a delay, but that didn’t bother me.

At least you always had something fun to look forward to in the mail.

Take that, bills and free issues of boring magazines!

Where was I? I was nine years old at the time and I was right there in the middle of the all the hype. My family and friends knew I was into comics and kept asking me what I thought about it. I didn’t know what to say because I was still processing the idea Superman was going to die.

I don’t remember exactly who got it for me–it could’ve been my aunt ordering it through the American Entertainment catalogue, it could’ve been my Dad picking it up on his way back from work or it could’ve been my Mom spotting it at Woolworth’s. Either way, I remember my parents surprising me with the black bagged version. I was thrilled because in my mind it was going to sell out quickly and I thought I wouldn’t get one.

I remember rushing to my room, turning off the TV and laying down on the floor to read the issue. I took my time with it, going page by page to take in the battle, but also procrastinate what I knew was coming. I remember hearing the John Williams theme as Superman fought Doomsday. It made the battle seem more epic and the sacrifice more heroic. Then that pull out image came and it was over. Superman was dead.

I took a few minutes after finishing the issue before rushing into the black bag to see what else was in there. I found a poster, an obituary, a stamp (I think) and a black armband. I think I took the armband to school, but didn’t wear it. I still can’t believe it’s been thirty years.

I got to read the anniversary issue an hour ago and it made me happy. Seeing Mitch again was a surprise. The last time I remember him in a comic was for the tenth anniversary Day of Doom mini. And I like that Jon didn’t know about this event; that Lois and Clark wanted to wait until he was older to tell them. Also, it’s a good day when you get stories with Dan Jurgens and Tom Grummett doing art. It took me back to those wonderful Triangle-Era days.

I thought the true Superman from Reign was the cyborg

I always thought it was The Eradicator and the Cyborg was really Brainiac. I was WAAAAY off on both instances.

Better than me. I thought Steel was Brainiac, The Eradicator was Bibbo, The Cyborg was Toyman, Superboy was Lois, and Lex was the real deal.

It’s cool you guys got to experience that. I read it more than twenty years after it came out. Had a pretty good idea what was going to happen & that all 4 weren’t the real deal. Cyborg Supes was very well written though, almost had me second guessing myself.

I remember when I first saw the 4 Supermen, but not necessarily where. Maybe an issue of Starlog?

Cyborg Superman had me thinking “That could be how Superman’ll look from now on. He looks kind-of scary (lay off, I was 9, going on 10

), but that’s the one that most looks like him.”

I also thought Eradicator could be The Real Deal. “How will he keep those goggles on while flying as fast as Superman often does?” was another thought that occured to me at the time.

Luckily, The Real Deal came back and I never had to worry about Superman being scary or pondering how his goggles would stay put during fast flights.

Superman is not scary. He never crushes me when I hug him.

Stargirl’s hugged Superman, eh? Must have missed that one.

Virtue and Vice is not on this site. I had to carry him everywhere so he would not die again.

Very nice of you to carry me.

It’s not how old you are, it’s how much time you dedicate to studying The Sacred Texts (comics)

I just started reading comics after the original Superman died but the four Superman that came out was beyond awesome.

I was in school. A boy had a copy that came in a sleeve. He didn’t let anyone else touch it. A bunch of kids were crowded around his desk. They were all super excited he had a copy. I had no idea what they were obsessing over until later. I vaguely remember thinking that Superman wouldn’t be dead and that the boys were crazy over this comic, lol. Now, here I am.

I just started reading comics after the original Superman died

Nice! TDOS was definitely an inroad for many fans. Have you been reading continually since that time?

the four Superman that came out was beyond awesome.

Agreed. Who’s your favorite? I tend to lean towards Cyborg Superman.

@c02goddess.16092 Speaking of obsessing over comic stuff in school, I remember when I was in fifth grade and Marvel Masterpieces trading cards were huge.

Kids would bring folders of MM (as well as Fleer’s Marvel cards) to school to gawk at and trade. I got in on that for a while, but after a bit, I tired of lugging a folder of trading cards to school, especially since I was always uber-retentive about anything happening to them, as well as dealing with the occasional wiener who would give me (and the other comic geeks as well) crap about them.