The Dark Knight Returns - A Retrospective

To this day, many consider this to be the Caped Crusader’s greatest story. Arguably the greatest story Frank Miller ever wrote. And the most influential story about Gotham’s Protector. Hailed as a return to darkness after years of being seen as a goofy character thanks to the Silver Age.

But…how much of that still holds true, if it ever did?

First off, while most people only familiar with the Adam West show probably still saw Batman as campy, the same can’t be said for comics. The 1970s saw writers put in hard work to ground Batman into some sense of realism and logic. As much as you can with a grown man dressed as a bat, but I think you understand what I am trying to get at. There was a large amount of people who already saw Batman become more serious and gritty. The only difference with Miller’s story is that he went as far as he could get with it. Speaking of Frank Miller, this was more or less back when he was in his prime and people loved him (unlike today, but that’s a different discussion). There are many panels/scenes that are beautiful, and some dialogue that is still considered iconic. Having said that, his style - both in terms of art and writing - is still something of an acquired taste. If you pay attention, Bruce kinda keeps getting a little more blocky and blown up in size throughout the story. And there are a couple of moments from the story where people still debate on what was supposed to have happened due to the way the scene was drawn and stylized.

It is easy to see why this story has become so influential. But…I think it was for worse. There are many things Bruce does or says that does paint him something of a facist. And despite all the moments where Frank shows new anchors and guests argue about Batman’s activities, none of his supporters actually try to dispute the claims and accusations of him being a facist. Aside from that, the story has him come off as too mean, too focused on the physical aspect of his mission and too much of a cynic. This is most likely the story where people began obsessing whether Batman or Superman would win in a fight, talking about them more as competitors rather than the friends that they fundamentally are. Speaking of which, the way Superman is depicted really goes against the character. To believe that he would allow himself to become just a tool of the government shows that there is a basic misunderstanding of what Superman is supposed to represent.

There is one point in the story where Bruce refers to his fallen sidekick Jason Todd as a “good soldier”. To me, that feels contradictory to why Batman became who he was and why he allowed people to work with him in the first place. Despite how some may portray or talk about his mission, he isn’t waging a war on crime. Or at least, not in the way that phrase might imply. He fights to make sure that the tragedy that befell him would never happen to another kid again. And his presence and actions inspire others to do good, whether it be volunteering at a community center or become another vigilante. Batman has been shown on multiple occasions to try and get others to not become vigilantes like him, but he ends up changing his mind once he understands their motivations and what doing this means to them. As much as we like to talk about Batman as a loner, a brooding and depressing figure, the truth is he ended up having the one thing he thought he lost. A family. To have him refer to one of his sidekicks as a “soldier” feels wrong in that sense.

Look - at the end of the day, I’m not saying this is a bad story. But it’s influence has pushed people to try and make Batman as dark and gritty as possible. What we want to see is some emotion and humanity from Bruce. What’s wrong with him embracing his allies as a family, or have him be a little more lighthearted and show compassion to those he saves? I realize that not all modern comics involving Batman are like that anymore, but the influence of this story is still very much alive. And to be honest, I am sick of it.

I’ve always had a contentious relationship with this story. I can acknowledge it bringing in newer fans when it came out and the effect it’s had on them but I feel it’s done more harm than good. It’s given birth to several tropes.

This story is the reason writers have been putting Batman and Superman at odds, with Batman always having to come out on top.

This is why we have a Batman who always needs to be ten steps ahead of everyone and has time to prepare…the bat-god trope.

This story is often regarded as bringing the character out of the shadow of the Adam West show and making Batman more serious, despite O’Neil, Adams, Rogers and Englehart doing that years prior.

We’re still seeing the effects of this story today now that the people it influenced are the ones who are writing and drawing the character. It’s become an influential crutch many lean on.

Growing up watching the Superfriends, I didn’t like how they made Batman Vs. Superman, yes they’re a different heroes, but they didn’t need to act as enemy to each other.
I was going to go far on the negative side including about the movie, not sure how far the Moderators would let me go on this.
It took me a while to get use to the dark Batman, with Burton’s film, Batman The Animated Series, I grew to learn to like Batman in many verison.

My favorite book ever made.

I think Dark Knight Returns is definitely an interesting take on the character. But I also agree that there is a tendency in the comic industry to attempt to replicate successful ideas instead of finding new interesting ones.

That is why the next DKR will portray Clark and I as very chummy.

Another annoying trope this story set up and he haven’t gotten past is that in any given situation, Batman always has to be right. Writers have this weird thing about putting him against other heroes be it mentally, physically or philosophically, and having Bruce always be the one whose right. Whether they’re trying to capture the fight with Superman from this story or they have an inferiority complex about Batman compared to other heroes, it’s always the same: no matter what, Batman can never be wrong. Say what you will about Green Lantern Rebirth, but it was refreshing to see John Stewart call Bruce out on his nonsense and for Hal to deck him…of course later they had to have Bruce get his hit back, but hey, it’s something.

Yes, we tend to forget that in 1986 Clark was by far the world’s most popular superhero, and now he is a distant third way behind me. A more modern adaptation might be to actually make him beat me.

Your favorite comic ever? Care to elaborate?

Not just comic. Favorite book means favorite of any type of literature. This book turned me into a deontologist, and it got me out of my unemployment slump. Fittingly I quickly found a night job. Then it inspired me to keep working during the pandemic. Other than the Bible (Where is my Batman/ King David crossover?) no written work has impacted me as much.

That is why I roleplay as DKR Bats and use his picture.

I am also much, much more a fan of Year One than DKR. That being said, I very much appreciate the skill that DKR took to create.

I love the DKR, but I think too many creators took the wrong message from the work. At the time it was released it was talked about as the LAST Batman story.

Ironically I smile a lot in it. My profile picture is literally me smiling in DKR. 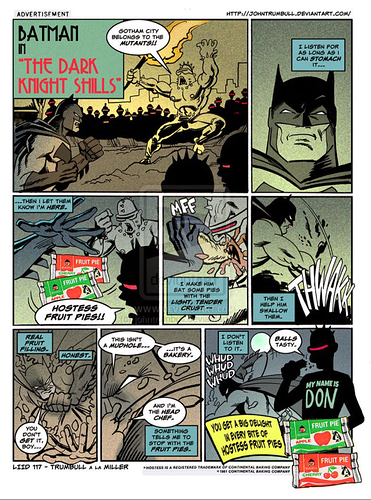 @TravisMorgan, you managed to say in less than a paragraph what I wanted to say in all my rant. I tip my hat to you!

Thanks much @superby1. We can only hope a Mark Waid type can come along and reset Batman like he did with Daredevil making him more devil may care and less Catholic guilt. Of course, Daredevil isn’t one of Marvel’s biggest characters that has about a dozen spin off characters and books.