The Breakfast League: A DC Universe All Star Games Playlist! 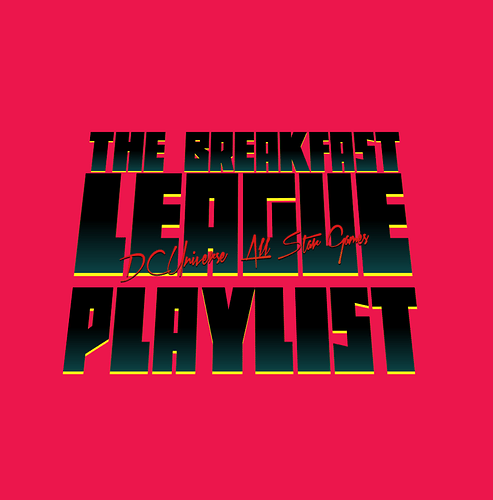 What you are about to see is the end result of a couple weeks of notes and unusually-deep thoughts on something that was ultimately for my own personal amusement, but I’m super excited to be able to share it with all of you here today.

Here it is: my personal, curated playlist for DC Universe All Star Games: The Breakfast League!

A few notes before I unveil the songs…

With all that out the way, I’m going to take you through each song and tell you why I chose it and what makes it a great fit for the series.

Here, we have the first of three songs in this playlist from Atlanta-based Synthwave band The Midnight. I actually had to fight off the temptation to fill this entire thing with nothing but their songs. There are a lot of great Synthwave artists, but to me they represent the best of that genre.

Why I chose it: I love the energy of this track. To me, when I think about the fast-paced, total fun nature of the story and the mysterious, propulsive nature of its central mystery, I think about this song. The synths, the vocals, the sax, all of it!

Now, for something a bit different. For me, this cover of Phil Collins’ iconic 1980/81 is perfect for the darker aspects of the story, in particular the mystery involving The Question(?), Rod and his stingers, The Joker loose on the streets of Gotham, and the mad-scientist antics at Arkham Asylum.

Not quite Synthwave, but definitely steeped in the feel of the 80’s and the dramatic nature of the original song.

Another Midnight song, with pumping synths, kick-drums, and sax! This song captures a more specific feel/energy with our cast of characters and how they progress through the story. Carl (Superman), Dina (Wonder Woman), Katie (Catwoman), and Tommy (Batman) all meet each other under less-than-ideal circumstances, only for the day to escalate into a full-blown adventure that rockets them on a path towards their true selves in an unpredictable world.

As the song puts it, our heroes were living in the days of thunder!

This probably the least 80’s-sounding song in this entire playlist, or at least I think it is. Mystery Skulls infuses elements of 70s and 80s dance music in a lot of their tracks, and this is no different.

Either way, it’s a fun, infectious bop that 100% fits the character of Katie (Catwoman). Hell, it could practically be her theme song!

How about a song that was actually produced in the 1980’s? Music video aside, Separate Ways is one of my favorite Journey songs and for good reason! A hard rock break-up song with synth in the background and guitar in the foreground? Chef’s Kiss

This song could really fit the POV of two characters here: Dina (Wonder Woman) and Floyd, her ex-boyfriend. I’m specifically thinking of their break-up scene in Episode 3. The line “Someday, love will find you.” sounds a lot like what Dina would say. It’s just really perfect for the two of them.

This is the odd one out of the bunch in that it has no vocals, but I threw this in almost purely for aesthetic purposes. The Breakfast League is a celebration of the 80’s, especially the musical style of that period, which still persists in modern-day subgenres of music (see: Synthwave). If the show actually had a full-on bells and whistles soundtrack, it would be a travesty if it didn’t sound like this.


Ready for a tear-jerker? This song takes its name from Ally Sheedy’s iconic line from this show’s chief inspiration: John Hughes’ 1985 film The Breakfast Club. Apart from that, it’s really a ballad about doing just that: not letting the imaginative spirit of your youth die with old age.

This, in my mind, is really an ode to tabletop RPG fans everywhere. Grown adults (like Freddie and Sam) who still with play and create with the same spirit that drove their childhood memories.

A quick note for those who are reeling from our real world: the second half of this song features recorded messages from fans of the band. Listen to that part in full. It’s a real balm for the soul and a call to keep that imaginative spirit burning.

Keep runnin’ on. Just hold on. Just fight on, till the sun goes down.

Here we go, the last Midnight song on this list and one of my all-time favorites. Explorers is a celebration of the adventure of dreams and imagination. Tabletop RPGs are the physical embodiment of that idealization: getting to create and explore worlds of the shared imagination.

In every episode of All Star Games, Freddie, Vanessa, Sam, Clare, and Xavier are all having the time of their lives doing this. Who wouldn’t want to have that same experience?

This one is absolutely Carl’s theme. He’s picked on by the other kids, but he’s the smartest in the group, can trash talk like a legend and, as was revealed recently, he’s kinda super, too.

And that is my playlist! There were probably more songs I could have added for other characters and moments, but this list is honestly what the show sounds like to me.

Once again, congrats to Freddie Prinze JR, @SamWitwer, Jon Lee Brody, and everyone on the cast and crew for bringing this amazing gift to the DC Universe!

This was an excellent playlist, from the display picture on down, @BCDC - kudos and hat tip to you for putting all of this together! I liked the leniency you used for your criteria - ours from this week ended up being based on time, but general genre/sound’s just as valid a consideration, I agree, considering some of my favs are 80s renditions of current songs.

I don’t know about you, but the show’s theme song, alone, gives me a particularly bubbly sense of glee, so I can understand why it caused such a positive reaction for you!

When going through, did you find yourself pulled most toward group themes, songs for specific characters, or each person actually playing them in the game (asking because I had the easiest time choosing by character, personally)? And may I ask what about the show in particular caused the thoughts you had to be so unusually deep?

As to your kind word of thanks, I extend them to you, as well, for being so willing to share with us what’s kept you pensive for the past few weeks - being able to check it out puts me me in, “the pleasure’s all mine!” as default (especially for tear-jerkers… doesn’t take much to pull at these heartstrings, I tell ya, lol).

Thanks so much! Just awesome hearing that you enjoyed this little thing of mine

For me, it could have easily been characters or group themes (there were a few songs that covered both), but for me it was the energy of the show that I was drawn towards. It’s the same energy that I get from the songs on this list and I’ve already been fans of these artists so for me it was easy to find the tracks that spoke to the vibe and aesthetic of the story.

And for the deep thinking, I think a huge part of that comes from having fallen madly in love with the show. I know RPG shows are big on the internet, but not since Relics & Rarities has a show really had me invested in the world and the characters all at once!