I’m also here for the sweepstakes. Looking forward to this movie.

Yes, I’m anticipating the release of The Batman in a big way.

Ayyy me too, can’t wait, this movie is gonna blow our minds, I can feel it.

I cannot wait to see my movie be a beloved hit, again.

Seeing Michelle Pfeiffer as Catwoman in Batman Returns when I was 8 years old made me a fan of DC Comics for life! I have no doubt that Zoe Kravitz is going to knock it out of the park. I’m very excited for The Batman!

You’ve found the perfect place to discuss anything DC-related (and on that account, anything related to The Batman movie)! Glad to hear that you all are excited as I am for the release.

I’m certainly looking forward to this movie! Actually bringing back Gotham to its noir setting, grounding it in a sense of realism, with some setups for amazing sequel villain possibilities. Like yes, obviously everyone wants Joker, and since this take on Riddler is heavily inspired by the real Zodiac Killer, it would be fitting if this Joker was inspired by another real killer: John Wayne Gacey. Obviously not in his outfit, but in his first killings that get Rob’s and the GCPD’s attention could match the MO of JWG, then could spiral out into bigger schemes (think The City that Laughed). Scarecrow would also be a very fitting villain in this universe (like City of Fear). But most exciting would be the inclusion of the Court of Owls for the 3rd film. The movie is already going to dive into the corruption of the city, along with the GCPD series. They could very easily drop hints here and there up until the 3rd movie when it’s revealed and Bats must fight them. Obviously these are just how I feel, but they’re prepositions that just get me very excited for what this movie/series could become 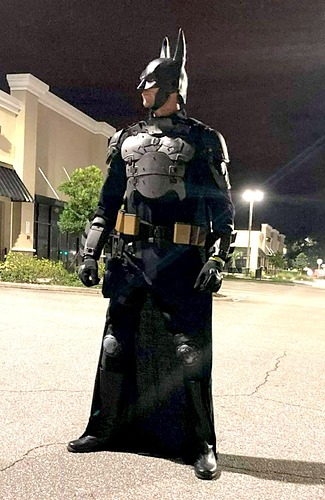 Also here for the sweepstakes

Here for the same. And what an impressive sweepstakes it is, thanks DC. Regarding Patterson, I’m holding judgment for now. Some mighty big boots to fill after the likes of Bale and Affleck.

Also here for the sweepstakes, Can’t wait to see this!

here for the sweepstakes as well
super excited for the batman 2022, the trailers for it are amazing

I have no doubt that Robert Pattinson will be able to pull off the Batman role - 2022 can’t come soon enough.

So excited for The Batman, Pattinson and Reeves are gonna knock it out of the park!

Welcome to the community @bkhassan8.4940!

I definitely agree; looking forward to both of their contributions to this movie.

Here for the sweepstakes as well! Can not wait for this movie, loved everything I’ve seen of it so far!

Super hyped for the movie, also here for the sweepstakes!