The Batfamily’s Skeletons That Never Get Talked About

There’s a hell of a lot to talk about within the Batfamily. But there’s a lot of hypocrisy, skeletons, and family secrets that never get talked about among fans, creators, or in comics.

Like how come nobody ever talks about how abusive Bruce is?
Why does nobody talk about how Bruce is not happy unless he’s at the center of everything - like he has to be number 1 and he doesn’t like when somebody does something better than him or takes down the villain instead of him?
When are we gonna point out that it’s really Alfred who raised Dick, Jason, Tim, and Damian? That man was raising a grown ass man child and his kids! Where is Alfred’s medals?
Speaking of Todd, when are we gonna talk about how he’s literally a serial killer who gets a free pass because Bruce feels guilty? Like the boy needs a trip to Arkham for some serious therapy! Not an enabler. It goes against Batman’s whole oath and philosophy but he lets Jason get away with it.
And why is it that Jason gets away with being a serial killer but when Damian and his little team of delinquent children do it they are on the run and ousted for the Batfam? Either it’s okay to be a serial killer or it isn’t Batman (and DC), choose one!
Why does no one point out that the silver spoon Robin, Tim is like obsessed with Dick? He’s been trying to be him since he showed up, trying desperately to duplicate his skills, be the leader of the Titans, in recent years he has even gone after Dick’s love interests, everything Dick has Tim wants. Is that DC’s fault or is it just the character? You decide. I kinda think he’s obsessed and wouldn’t be surprised if he had a box full of Dick’s stuff under his floorboards.

Are there any other things you can think of that are not talked about when the Batfam is concerned (but totally should be)?

Speaking of Todd, when are we gonna talk about how he’s literally a serial killer who gets a free pass because Bruce feels guilty?

Yeah I don’t like this at all. Bruce is so hard on Azrael and Huntress yet kisses Jason’s but.

Exactly! Like the hypocrisy in this… and let’s not forget why is Jason not on the run for being a serial killer but Damian and his lil friends are? Why is it right for Jason to kill people but nobody else?

I constantly let the Robins lead entire teams of superheroes and let them take down the villains. I love seeing my children succeed.

Dude, Batman has never been supportive of the Titans (I can’t speak for any other team cuz I’ve never read them but it isn’t hard to conclude he would feel the same about others) They just said ■■■■ you were doing this anyway. So he didn’t have much of a choice and he wasn’t happy about it. Batman wants everyone stuck in his shadow. Now, there are the random writers who try and retcon him as a good father and mentor, but they’re too few and far in between so overall he’s a dick and I think it’s past time to talk about it!

That’s why I love this 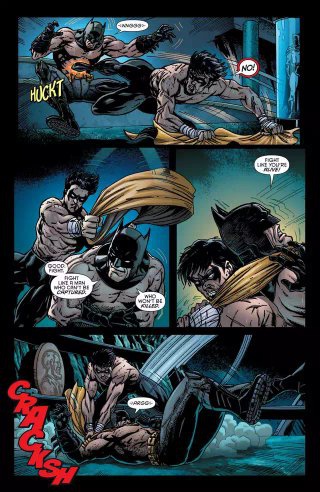 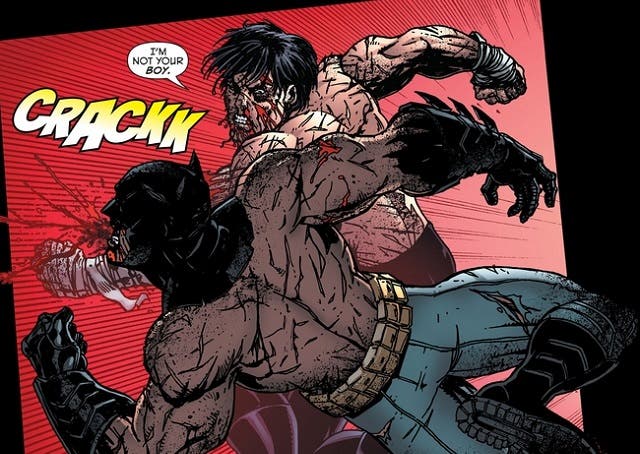 I love it when dick beats the snot out of bruce.

I’ve never liked continuities where Bruce abuses the batfamily. I think you can make Batman flawed without making him a monster. As for the inconsistency with Jason getting a free pass while Damian doesn’t, I think that’s all up to writers being overwhelmed by the amount of Robins.

One “skeleton” that doesn’t get addresses is that if Kate Kane is his cousin, why wasn’t he raised by her family? And how he could be alone in the world if he has more family in Gotham?

SAME!!! I love when Dick puts Batman in his place. He’s the only one to ever stand up to him and put him in check. The moment where Dick punches Batman out in BTAS is EVERYTHING for me!

Agree on Huntress from the comment above. I’m biased cuz she’s my #2. But, the facts are there. She is free to have her own agenda. Her entire family was murdered in front of her. Bruce may have his morals set the way he thinks is the only way. But, speaking as an Italian. You get revenge for familia, you don’t let them walk. Plus, he uses her. Bans her than asks her to help him in no mans land. Just picks & chooses when he thinks she’s capable, after she’s well beyond proving she can handle herself just fine. Richard Dragon doesn’t train lightly. He needs to recognize that & get over it. While on the subject, & coincidentally my #1 Zatanna. He does the same to her. Abandoned her b/c of Identity Crisis when Dr. Light had to be memory erased. He knew the whereabouts of all the wife’s etc & promised he wouldn’t stop. The entire JL agreed except Batman. Sometimes, I think his rules get in the way of what needs to be done, despite his beliefs…

also Hunteress actually regrets killing sometimes also I’m pretty sure Jason has killed more and used lethal force but since he’s bruce’s son he gets a pass. on the note of hypocrites, Leslie thompkins what she did to Stephanie was really messed up. stephanie had a mother who was grieving and hurting. Stephanie’s boyfriend and best friend both went done extremely self-destructive paths. and bruce did he change, no he got worse

Yes…to not save her goes against the Hippocratic Oath, I’m dead serious when I say I audibly gasped when that happened. I thought Thompkins was out forever & Steph was gone. Good point, cuz, how does Batman justify forgiving Leslie & handcuff Huntress & Zee?

he at least apologized to Zatanna (in his way). on thompkins she probably had to threaten Steph a little bit to go to Africa with her

Yeah, she wanted to teach Batman a lesson. But, man…that’s a harsh way to do it. The apology was cool but only imho, I see it as him cherry picking Z & Huntress only when he had to, than deserting them til he needed them again?

i feel like with the exceptations of the gotham city sirens Bruce is harder on the women in general when it comes to murder i mean there were others involved in the mindwipe thing but Zatanna gets all the blame. robin(jason pre death) use lethal tactics slight reprimand, hunteress use lethal tactics huge lecture. Damian’s mureders excused, Cass’s (the first one when she was child) he mistrusts her. also the way it was retconned with steph and Leslie almost makes it worse. doctor fakes minors death and take her out of country and makes her work all to get at an adult in said child life becuase doctor disagrees with them?!? its messed up

I gotta say, I agree with every point u just made.

And let’s not forget Jason’s murders are excused every single time. I don’t know about before for Damian but recently he and his version of (god I hate to say it) the Teen Titans were on the run for several murders and ousted from the fam so… but now he’s kinda back everything seems forgiven. So yeah…

I’m on board with Damian point. I never thought he’d be in my top 2 Robins but he is. He can’t help how he was raised. It’s instinct & muscle memory. But, at least he tries & basically overcame it.

when damian was first introduced he was in a similar boat as Cass, trained assassin from birth, when Damian before really training with batman kills its brushed off, when Cass younger and more indoctrinated than Damian kills or Batman sees her kill that guy in the video he kind of freaks out(not the time she went evil I prefer to pretend that never happened).also damian chaterization is a little inconsistent at times. huntress in her year one get depressed and shows regret for killing this guy Jason would not think twice, guess who gets in more trouble? Huntress. i just feel like with a lot of the female charcters except the sirens batman is harsher