The August Walmart Giants Are Out

Swung by two stores. The first had zilch, but the second had the goods.

SN: The picture is from eBay, and gives a decent look at the new books. 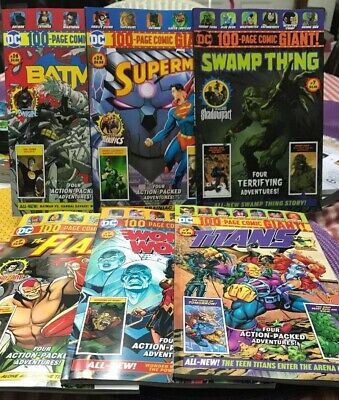 The War Mart closest to where I live had them and I picked up Superman and Wonder Woman. This month they stocked them on Wednesday last month maybe even the last two months they where stocked on Friday. I think it was in June only Flash and Titans was stocked at one WM and finally the rest got stocked a week before the July issues. Has anybody else seen the 5 or 10 pack with the Justice League #1 100 Page Giant?

@LPCustom76 I was surprised the new books were out this week. I figured since they have almost always come out on the second to last Friday of each month that next Friday would be when they’d hit. That’s neat (and appropriate) that this month’s books hit on Wednesday.

Regarding the JL 10-pack, I saw it once, along with the Superman 10-pack. The Superman set came with Superman Giant #1 and three of the Walmart exclusive 3-packs that were primarily composed of New 52 and Rebirth single issues. Haven’t seen it or the JL set since then.

On another note, after the new story in Titans Giant #7, there’s a mention of the new Giant line beginning next month and what the first group of titles are (the same that have been mentioned here and in recent DC solicits).

I didn’t even know they were doing new Giants. I also haven’t seen the Superman 10 pack.

Who am I kidding? Worth it!

When did the Titans fight Mongul?

I don’t think my Walmart carries them. I couldn’t find them.

@BatWatch The Titans had a dust-up with Mongul in the new story from Titans #7.

The cover art on all of this month’s books is brand new and not from the reprinted material.