Hello and welcome to The 52 Book Club, where each week we read an issue of the critically acclaimed maxi-series to celebrate its 15th anniversary!

This week we’ll be looking at issue #37, written by the usual gang of Grant Morrison, Geoff Johns, Greg Rucka and Mark Waid, with breakdowns by Keith Giffen and finishes by Patrick Olliffe. This issue also features a Secret Origin back-up focused on Firestorm written by Waid and art by Jamal Igle. 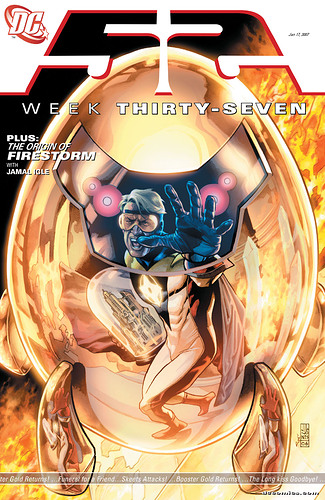 The Bottle City of Kandor is under attack…by Skeets, and at long last, the identity of Supernova is revealed. Meanwhile, back in space, the surviving members of the lost heroes hold a funeral for a friend—but was it a bit premature?

If you’re just joining us or are trying to catch up, you can check out the hashtag #52-book-club

Let us know what you think down below!

He’s alive!!! But now how will he get home? Skeets as a villain and Booster is Supernova. An interesting twist.

A complicated one too, because that basically meant that Booster was fighting and hating on himself the entire time.

Nice middle of the road issue moving the pieces around the chessboard some more.

It was fun seeing these aliens that I seem to recall were part of the Grant Morrison Animal Man trippy run.