Hello and welcome to the 52 Book Club, where every week we look at an issue of the acclaimed series in celebration of its 15th anniversary!

This week we’ll be looking at issue number 46, written by the usual suspects of Grant Morrison, Mark Waid, Geoff Johns and Greg Rucka, with art breakdowns by Keith Giffen and finishes by Patrick Olliffe. This issue also features a Secret Origins back up featuring Batman by Waid and Andy Kubert. 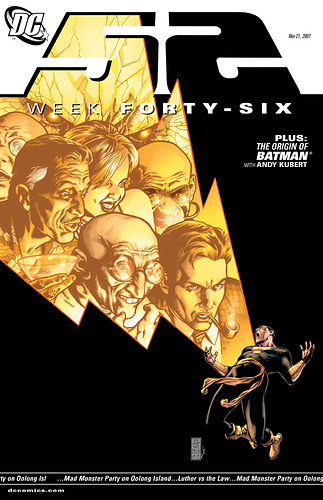 You reap what you sow. The scientists of Oolong Island learn this the hard way when Black Adam comes pounding at their door for retribution for their involvement in the creation of the Four Horsemen. It’s Science versus Magic in Week 46!

Check out the hashtag #52-book-club to see the threads for all the previous issues!

Looking forward to discussing this issue with you all!

I was a little disappointed at how easily Black Adam was stopped. Good on Clark for figuring out Lex’s trick.

I’m pretty sure Black Adam somehow gets out of this predicament, but he’s not unstoppable, he has limits, and wow did he bump up against them here.

I was a little disappointed at how easily Black Adam was stopped.

I guess that’s what happens when you go from mowing down a whole country to some of the most dangerous mad scientists alive. Agreed regarding clark.

I’m pretty sure Black Adam somehow gets out of this predicament, but he’s not unstoppable, he has limits, and wow did he bump up against them here.

Yeah, it’s just going to make it all the sweeter when Adam does tear through all these guys.

Y’know, with some of the plot points of this series, it’s hard for me to tell who exactly did what, but when I read the dialogue of all these mad scientists, I think “Yep, that’s got Grant Morrison’s fingerprints all over them.” It was also interesting hearing Cale talking about Manheim and how a “Final Crisis” is approaching. It was surprising, but it makes sense that they probably had that infamous event at least percolating in their head at the time, if not actively working on it.