Hello and welcome to the 52 Book Club, where every week we read an issue of the universally acclaimed maxi-series in celebration of its 15th Anniversary!

This week we’ll be reading issue #41, written by The Gang of Greg Rucka, Grant Morrison, Mark Waid, and Geoff Johns; with art breakdowns by Keith Giffen and finishes by Giuseppe Camuncoli. This story also features a Secret Origins back-up featuring Starfire written by Mark Waid and drawn by Joe Benitez. 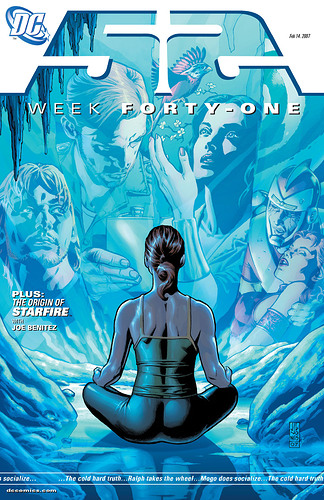 Renee Montoya begins training in the mountains of Nanda Parbat, but can she still face herself after the near year-long journey with The Question? Meanwhile, in the depths of space, the lost heroes literally crash into some much-needed help.

If you’re just joining us or want to catch up, you can use the hashtag #52-book-club!

Looking forward to talking this issue with you guys, and Happy Valentine’s Day!

Looks like Renee is almost ready to become the Question. The helmet of Fate is leading Ralph down a path that will only lead to regret. Adam Strange and Starfire appear to be saved, but what about poor Buddy?

Okay, I have been wanting to join your guys’ discussion of 52 because I really love this series, but I’ve had other reading getting in the way of me catching up. But I gotta jump in for this issue.

This is the only time I know of (and please someone correct me if I’m wrong) that my two favorite women of DC meet. And they don’t even know who the other is! Renee even hits Diana with a cheesy pick-up line! 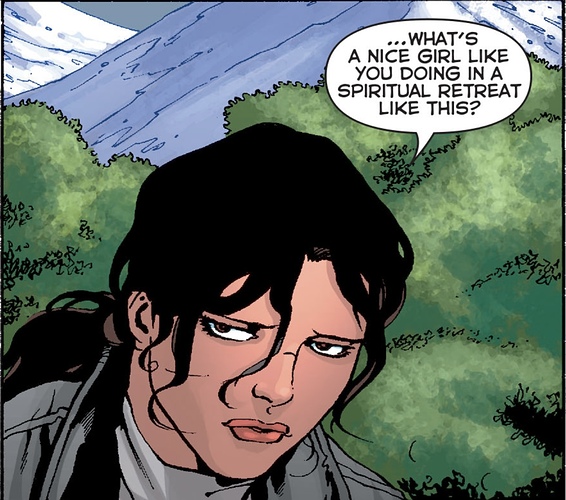 And Diana, wracked with guilt and uncertainty over her execution of Max Lord (during Greg Rucka’s original Wonder Woman run), still manages to impart some Amazonian wisdom on Renee: 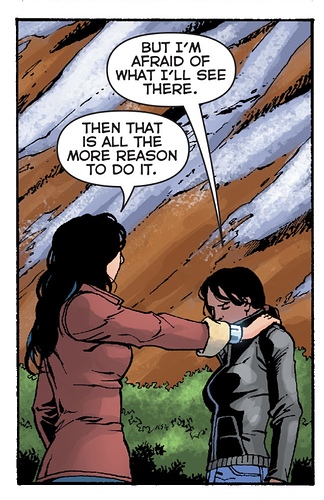 There’s that little glimpse of her bracelet in case there was any doubt in the reader’s mind who she was.

I just love this whole exchange so much. And I love what it’s leading into for Renee. But I’ll say no more!

I had no idea that was Diana / Wonder Woman, kind of hard to tell with the artist… I was thinking it might be Cheshire there to meet Richard.

This is one of those in between holding steady issues.

This is the only time I know of (and please someone correct me if I’m wrong) that my two favorite women of DC meet. And they don’t even know who the other is! Renee even hits Diana with a cheesy pick-up line!

The closest I can think of was Final Crisis when Renee as The Question recruited a bunch of different multiversal characters to save the multiverse including Superman and Wonder Woman/Nubia of Earth 23.