Hello and welcome to the 52 Book Club, where every week we read an issue of the critically acclaimed series in celebration of it’s 15th anniversary.

And this is the biggest week for this club ever because we’re going to be reading not just this, but the entire World War III mini-series that is spun out of this issue!

So let’s start with issue 50, written by Geoff Johns, Mark Waid, Greg Rucka and Grant Morrison, with art breakdowns by Keith Giffen and finishes by Justiniano. 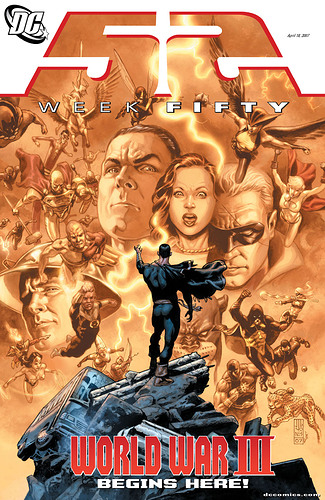 World War III! Black Adam goes on a rampage and the various heroes of the DC Universe must work together to stop him. This issue coincides directly with the WORLD WAR III limited series.

Then we get the series World War III, written by Keith Champagne with art by Patrick Olliffe, Andy Smith, Tom Derenick, and Jack Jadson. 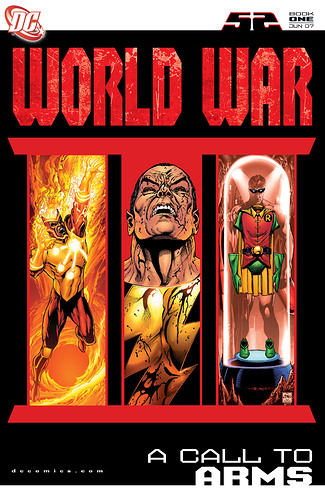 Chaos has broken out across the globe! Firestorm and Firehawk are among the many mobilized to stem the flow of blood and thunder caused by the one-man army...

Chaos has broken out across the globe! Firestorm and Firehawk are among the many mobilized to stem the flow of blood and thunder caused by the one-man army of Black Adam! Taking place between the pages of 52 #50. 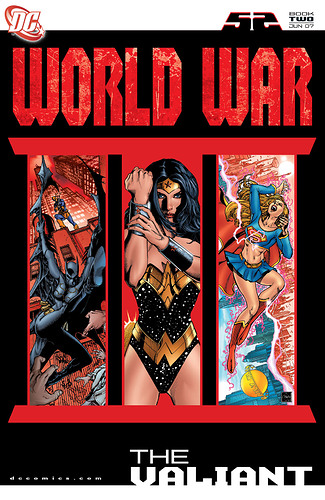 Learn the secrets of the DCU’s missing year! The war rages on, extending from the far reaches of space—where Supergirl encounters a missing hero—to the darkest depths of the ocean—where Aquaman’s fate is revealed! Taking place between the pages of 52 #50. 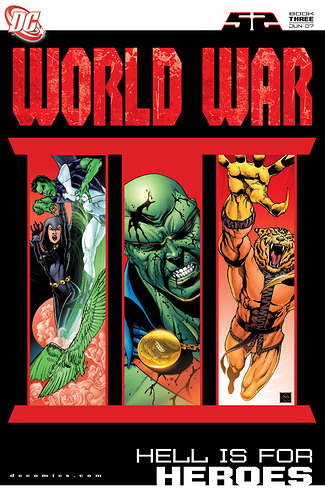 The horrors of war become grim reality for the Teen Titans, as they suffer the loss of one of their own. Heroes fall as Black Adam continues his cathartic devastation and destruction! Taking place between the pages of 52 #50. 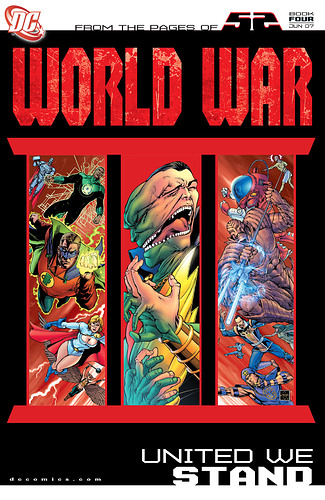 Who still stands to stop the fury of Black Adam? Through the fog of war, a hero is reborn! Led by the JSA, the DC Universe bands together against the wrath of an ancient evil! Taking place between the pages of 52 #50.

How do I join the club? I can’t find it under groups.

It’s not an official group, I’ve just been making the posts. You can see previous entries by checking out the hashtag #52-book-club

This is the Marine Corp of secret “illegal” clubs. Once a week on Mondays for the past year it emerges to briefly suggest a single issue, then submerges like Kraken before the Mods can see!

Interesting ending to The Black Adam conflict. Might have known the Egyptian gods would be messing everything up.

I’m one of those people to spend good money on the World War III miniseries at the time, but wished he hadn’t. We’ve seen this kind of carnage with a Superman level hero gone bad more than a few times in the past 30 years.

Nice to see the time travelers appear at the end and also fun to have Professor Morrow being dragged into the whole mess.

This was an interesting series of issues to read, especially WWIII, because while it works as the climax of Black Adam’s arc in this series, it also has the difficult job of also establishing some of the other stuff that was done for One Year Later, or in specific cases, retcon what happened during One Year Later. Specifically, the scenes of Deathstroke confronting Cassandra Cain to explain her very unpopular heel turn during the Robin book after One Year Later.

I liked the use of Martian Manhunter as the sort of main protagonist of this series, not just because his mind reading and invisiblity make him very capable of handling the set up for other characters, but as the books spell out, he is uniquely positioned to share what Black Adam feels.

I feel like it’s probably the messiest of the books we’ve covered so far, but for all it had to do, it did it valiantly well.