Hello and welcome to The 52 Book Club, where every week we read an issue of the acclaimed series to celebrate it’s 15th anniversary!

And this week is the big one, the final issue of the series! Written by Geoff Johns, Grant Morrison, Mark Waid and Greg Rucka, with art breakdowns by Keith Giffen and finishes by inhales…Chris Batista, Eddy Barrows, Patrick Olliffe, Michael McKone, Darick Robertson, and Justiniano. 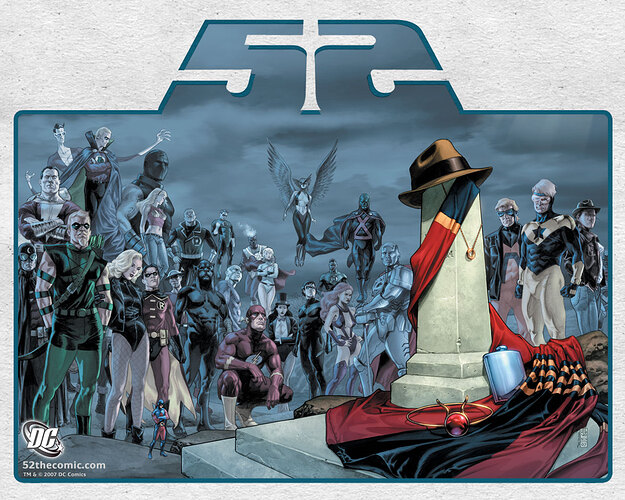 This is it! The final installment in the DC Universe’s missing year! What is the secret of the 52? And how can Booster Gold and Rip Hunter save it all from the monster Skeets has become?! The series by Geoff Johns, Grant Morrison, Greg Rucka and Mark Waid concludes with worlds-altering consequences!

Looking forward to discussing this issue, and the series in general, with you all! If you want to take a look at all our previous installments, check out the hashtag #52-book-club.

Also, I just want to thank everyone who’s participated in this little unofficial book club I started almost on a whim. It’s been great doing this with you all.

Oh, and one more thing: While this is the last issue of the 52 series, there are other books that spin off of the events of this series, and I’m gauging interest in whether people would like to continue with those stories. To be clear, the stories we would be discussing:

Also, this will likely be like more standard book club entries, where one week (or more) would focus on the entire arc.

I’m going to be satisfied to have read these 52 plus issues at this point.

Which I have bookmarked to finish up by Saturday!

I know I haven’t participated in this club, so IDK if my .02 mean anything, but if you do the first arc of Booster Gold?

I will be in for that.

Once again I’m astonished I totally forgot what happened in this last issue from when I read it 15 years ago.

It did seem odd that the final issue of 52 would only feature Rip Hunter and Booster Gold and basically ignore all the great characters before it.

The double cover indicated this would really highlight a lot of characters, but honestly it read like a real entertaing Booster Gold issue guest starring his BFF Rip Hunter.

Here’s hoping somebody other than a fellow Club leader stops by to also read this.

Wow patting myself on the back over here.

Apparently I’m the only human being other than the club leader to actually read through all 52 issues of 52 for this club!!!