Hello everyone and welcome to The 52 Book Club, where every week we read an issue – and this time it really is just an issue – of the acclaimed series in celebration of its 15th anniversary!

First off, let’s just say that this reading had a few days delayed to give you guys a little respite after five issues worth of story last week! Yeah…yeah, let’s go with that.

For real though, this week we’ll be looking at issue #51, written by the usual suspects of Grant Morrison, Geoff Johns, Mark Waid and Greg Rucka, with art breakdowns by Keith Giffen and finishes by Joe Bennett. This issue also features a Secret Origin backup featuring the JLA written by Waid and drawn by Ivan Reis. 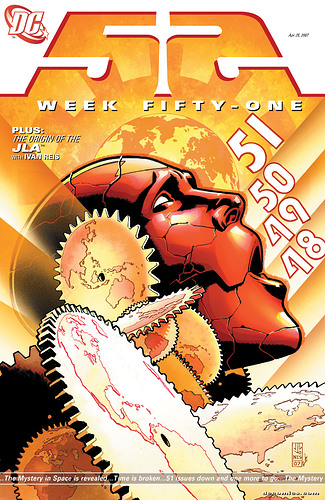 The heroes of the world unite for a memorial service following the devastating World War III—including the Big Three together again at long last! The penultimate chapter of the weekly series by writers Geoff Johns, Grant Morrison, Greg Rucka and Mark Waid.

If you want to see previous installments of the club, check out the hashtag #52-book-club!

A very trippy issue towards the end. I did leave feeling like nothing happened, but the Mr. Mind angle feels like a Morrison concept.

I could see that – though I imagine that after last issue (+4 extra) was basically a huge war, the writers felt the readers could use a breather.

but the Mr. Mind angle feels like a Morrison concept.

Oh yeah, the idea of this worm alien thing becoming stronger when going outside the dimensions of the universe definitely lines up with their idea of “worm aliens watching the universe on a forth dimensional level” and God/whatever diety they’re praying to that week for adding crazy stuff like that in comics.