Hello and welcome to the 52 Book Club, wherein celebration of its 15th anniversary, we are re-reading the acclaimed maxi-series written by Grant Morrison, Greg Rucka, Geoff Johns and Mark Waid!

This week we’re diving into Week Eleven, by the aforementioned brain trust of writers, with artist breakdowns by Keith Giffen and pencils by Joe Bennett and Todd Nauck. This issue also continues the back-up New History of the DC Universe written and drawn by Dan Jurgens. 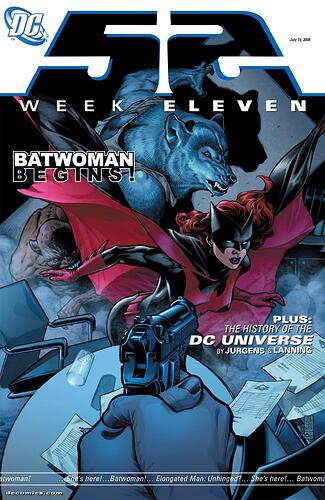 It’s Week 11 in the DC Universe’s lost year and Ralph Dibny slides further and further into depression and anxiety as his investigation continues. And while Metropolis got a new hero with Supernova, Gotham gains a new protector as well: the mysterious caped crusader Batwoman!

The link for this issue can be found here: DC UNIVERSE INFINITE

Looking forward to hearing your thoughts! If you’re just joining us, you can look back at past installments by following the hashtag #52-book-club!

Another good issue. I enjoyed seeing the interactions between Renee and Kate. I’m not gay and I dont identify as a lesbian, but its kinda nice to see them depicted in real life situations(as real as superhero comic situations get), and not seeing them in bed together, or making out. I could relate to how Renee was feeling when they met in the park. The whole “I hate you, but damn, you’re fine and I love you!” broke my heart.
Speaking of Heart breaking…thats the only way I can describe the Ralph Dibney storyline. His desperation leaps off the pages.

Yes, Ralph breaks your heart. So sad to see his grief for his soulmate and having Sue’s belongings violated by the cult. The debut of Batwoman was great, and you could tell Renee knew she was Kate.

Bookmarked. This is like some secret rave party that you have to really hunt down, lol.

Yeah, downside of being an unofficial club. That’s part of why I made the #52-book-club hashtag, so you can follow that.

So we were down to two storylines for this issue which was a little less confusing.

The Elongated Man storyline didn’t really advance too far, it just mainly kept that plotline ball rolling for the most part with no real advancement to speak of, just forwarding the mystery like one of those endless Lost episodes.
So apparently we’re letting it stay on warm on the plot stove top.

I was not aware that this issue is the very first appearance of the modern Batwoman. Concerning the romantic side, Renee is no catch for anyone including herself. I would not wish that disabled out of control spinning top on anyone. What I find compelling about the Renee storyline is to see if she figures out a way to become whole again that has nothing to do with finding a mate.

The battle scene with Batwoman made zero sense to me. No explanation is given or shown as to how she dispensed with the three suped-up villains. She stops Renee from shooting one of them but it doesn’t show how she disables them at all. Throwing a couple of punches would not have stopped these characters, and she does not have superhuman strength. Even one of these creatures would have given Batman a run for his money.

In my mind I’m just thinking, “well at least it was three against three once she showed up, maybe that’s part of the explanation,” but maybe there were across wires between the writers as to who was actually going to write the fight scene as opposed to just having Batwoman make some poses for the camera.

The name “Whisper A’Daire” sounds like someone out of the Starman series of the 90s…but isn’t lol.

Now that you mention it, it is definitely more streamlined this issue. That’s something I’m honestly alright with – I think some other weekly comics fall into the trap of trying to fit all the plots together into every issue, but because of the lack of space it can feel like plots are being strung along with no real progress. Which, as @Don-El said, kind of happens with the Elongated Man story anyway.

Though, there is a double-edged sword here where if it’s not a plot you’re invested in, you may not enjoy this issue as much. Like, I’m a Gothamite fan in general as well as a fan of The Question, so having that be the big focus is okay with me. But if someone is, say, a huge Booster Gold fan, they might be bummed out that he’s really not in this at all.

I can see what you mean about the fight scene being a little…vague. I suppose with this issue they weren’t so focused on the fight so much as Batwoman’s real introduction and making her look as cool as possible.

The part of Batwoman stopping Renee from shooting one of them also sticks out because while Kate as we know her today does try to adhere to the code, she definitely plays it a looser than Bruce or any of the other partners outside of maybe Huntress. That and the overall look of Kate in this series strikes me less as Kate as we know her and more of a prototype that doesn’t really get zeroed in and become the character we know and love until Greg Rucka and JH Williams III get their hands on her.

Thanks for sharing your thoughts, Don!

Speaking of Batwoman, I’ve been reading this series through a digital trade I got a while back, and while it doesn’t have a lot of backmatter, it does have bits like this, which says that the Batwoman design came from a Batgirl redesign that was ultimately scraped. Which considering the hair, I think implies that DC was for a hot minute considering making Barbara Gordon walk again and was going to put her back in this suit as Batgirl or maybe even Batwoman.

So we could say that when she was first introduced, Batwoman was…Questionable lol.