Hello and welcome to the 52 Book Club where – “Wait!” I hear you say. “Didn’t we finish the weekly series last week?” Yes, yes we did, but let’s see where the stories within the series went after, shall we?

So let’s start with the one that’s literally called “52 Aftermath: The Four Horsemen,” written by Keith Giffen and drawn by Patrick Olliffe. 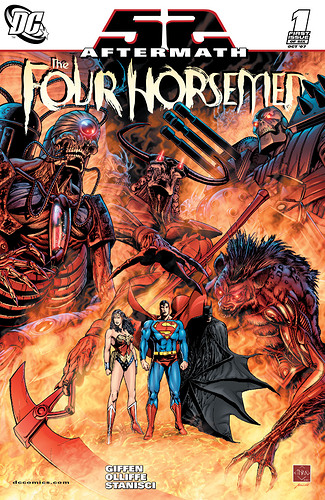 From the ashes of devastated Bialya they rise again—War, Pestilence, Famine, and Death. Freed from the thrall of the mad geniuses who first summoned them, the Horsemen look to their own dark ambition to remake the Earth in their image—and only the combined might of Superman, Batman and Wonder Woman can stop them!

If you want to see previous discussion threads, check out the hashtag #52-book-club!

Looking forward to talking this book with you all.

At least the big three are back. too bad they’re dead again now

Will this club include Batwoman Elegy and The Question Pipeline?