That new Watchmen trailer was to good!🔥

what was your thoughts on that new Watchmen trailer?

Just watched it, interesting. I was and still am confused as to why this direction was chosen as opposed to a series adapting the original work, which is what people like me wanted. I guess an adaptation would be finite and this can go on indefinately.
We got a taste of the concept. The opening segment looked to be a clip from the in-universe tv show where the Minutemen are being adapted. Widespread civil unrest, masks and ambiguity everywhere. Unclear how much the public knows about Rorschach’s journal. I did notice the squids near the end. If those were the squids it looks like adding the Watchmen 2009 movie to their roster before the series premiere would only confuse people.
I’ll be watching it but at this point I have a reserved interest.
My biggest question is how they will explain this sequel world to a public not widely familiar with the original story.

When it was first announced, I was wary. But every bit of footage I see goes a long way towards winning me over.

“…how they will explain this sequel world to a public not widely familiar with the original story”?

How many people had read A Game of Ice and Fire before GoT started?

I watched this for the first time in rushed circumstances, so it wasn’t until I just rewatched that I realized that FBI Agent Blake was LAURIE Blake, aka Silk Specter II. I had only caught the Blake reference the first time. But now that I’ve seen it, I think That Hashtag Show was right: Jeremy Irons is playing Adrian. 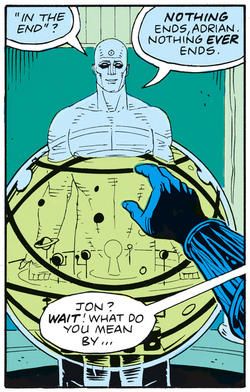 I’m so glad they aren’t doing another adaptation and instead are telling a new story set in the same universe. This looks really incredible.

It would be dope if they use aspects of doomsday clock for this. Either way, I got chills when I saw that blue hand. I’m in.