We were having a very interesting conversation on the DCU Fans Facebook page, and I thought I would take it to y’all. Who do you think would win in a fight. Just for the record, it is just Thanos, no Infinity Gauntlet. Have at it! My vote is on Darkseid, he literally has godlike power, and Thanos needed magical stones to be on that level. Darkseid also has Omega beams, which burn people alive, see if Thanos has anything close to that.

Darkseid without a doubt. Death Battle did a good breakdown on this fight on their YouTube channel.

Darkseid, one handed because he’s eating a slice

is up to the reader/movie watcher.

100% Darkseid when Thanos doesn’t have the gauntlet. 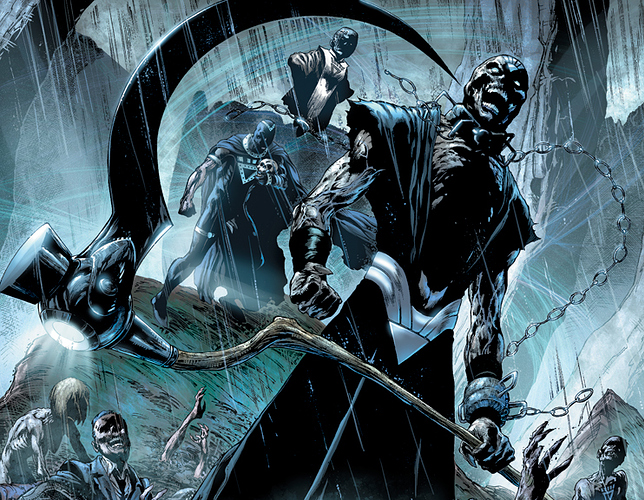 Darkseid has far higher power sans MacGuffins. He will break into Thanos’ house, sit on his couch, and then destroy him with the Omega Effect.

While eating pizza. With, like, tomatoes and peppers and onions on it, as is fitting for the God of Evil. Oh, and cilantro. Definitely cilantro. I’m pretty sure they actually grow that stuff on Apokolips to crush the will of humanity.

I think all processed cheese is produced on Apokolips. That is the food that will break the will of any planet.

Thanos would be a smear on darksieds boots

Nekron v Darkseid would be an awesome battle!

Even with the Infinity Gauntlet, Manos, oops….Thanos would be a notch on Darkseid’s belt.

Darkseid’s the embodiment of despair, evil, grim stuff, etc. Thanos is a guy with a ***** for Death. One shot of the ol’ Omega Beams, and Mister “run from it” would indeed be running from it as “it” would be a character with the nom de plume of Certain Defeat.

Darkseid could easily beat Thanos even with the gauntlet

Why have the infinity stones when you can have the Emotional Spectrum Power Batteries and rings!

See, the Infinity Gauntlet makes one literally omnipotent, so I’m not buying that Darkseid wins at that point. If Darkseid can lose (and he has lost at various points), then someone with the full Gauntlet can beat him. Darkseid might be able to make it an interesting fight if he had access to the Anti-Life Equation, but even that just removes free will, as opposed to total control over everything. If Darkseid acted quickly, he could force Thanos not to use the Gauntlet, but that would be his only real chance.