So this is my fan made story on how id like Teen Titans Season 6 to go if we ever get it.

We then cut to Slade battling Red X, Red X pushes Slade off a building assumes him dead (But he doesn’t die)

He approaches the Titans and warns them Red X is killing every villain in the city.

The team ponders what to do

Then the show takes a little bit of time (Maybe 2-3 episodes) to show us where are characters are at in life, Robin and Starfire are happy together, Cyborgs happy yet starting to grow up and want more out of life, Beastboy has respected that his Terra is gone and has decided to let her be and ravens just kinda relaxing being her normal self.

The Titans are out getting pizza when hey hear a bank alarm. They rush over and find RedX attacking someones face who we don’t see. During the fight, everyone is knocked out but Beastboy and Robin. Red X flees the scene and Robin follows. However Beastboy goes to help the “criminal” RedX was attacking and discover its Terra who gets rushed to a hospital. She lives but has to remain the the hospital. Meanwhile Robin fights RedX on a roof and loses. Robin assumes he is going to die but RedX doesn’t kill him.

This incidents causes the team to lose motivation

Robin goes an trains with Batman, While they train Robin tells batman about how good his team (specifically highlighting cyborg) and asks him why doesn’t he have a team of his own? In which he doesn’t respond.
Later he tells bruce that he doesn’t know how Robin can lead a team. Batman responds with “maybe Robin cant”

When Robin walks through the door to titans tower it is revealed he is no longer Robin but rather Nightwing.

Some stuff happens and its time for the final fight between RedX and the Titans
All are knocked out but Nightwing. RedX goes for the final blow but Slade shows up and him and Robin team up tp bring down RedX. as RedX lays unconscious Slade takes off his mask and hands it to Nightwing. Inside the mask reads “Deathstroke” and Slade says to Nightwing, “Being dead one already made me realizes that i’m to old for this type of life” and Slade Walks off

As Slade walks off everyone regains conciseness. Everyone but Raven. The team cries as they realize what this means.

At the funeral everyone shows up (Titans east, The kids she babysat, Doom patrol, batman, ect)
Robin or Beastboy makes a speech about how she “Just wanted to be good”.
Robin announces how there are no Teen Titans without Raven and they disband the team
Terra shows up and offers Beastboy condolences on his loss
Speedy offer Beastboy a position with Titans east
Batman tells cyborg that hes putting together a team
Nightwing and Starfire ride/fly off into the distance

The show will end with a shot of Titans Tower with the lights off
But three boots are in front of it
The boots of Red Robin, Kid Flash and Wonder Girl

SOME NOTES:
RedX is really the only possible villain. A brand new one for the finally would feel lame when brother blood, Slade and Trigon were all built up crazy well, RedX was already built off so give us the payoff.
Robin/Nightwing and Batgirl has always felt super stupid to me so I want him to remain with Starfire their chemistry is better then any other couple in any show. We know that raven becomes some sort of weird entity that balances good and evil having her die could technically still allow that to happen. I picked WonderGirl and Kid flash at the end because they were actually suppose to be on the show but were cut do to licensing issues likewise the show as a whole is based on the Marv Wolfman run in the comics and they are apart of the lineup as well as the core 5. 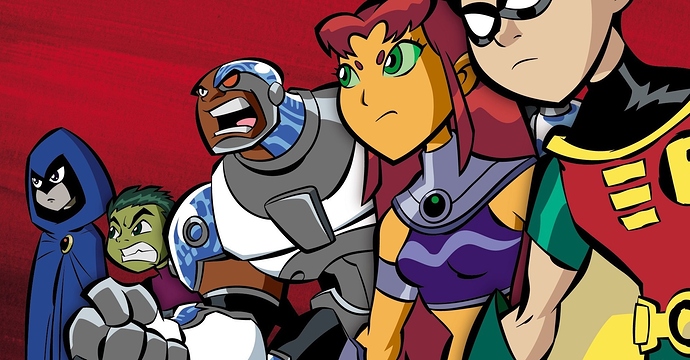 Sounds good. I’d watch that. But still need to know who RedX is

Would trigon be at the funeral?
I MUST know!