Tech Tuesday: The Hack. Which DC Universe Gadget Will Save You?

Welcome back to the next episode of Tech Tuesday! The place to live out your own heroic fantasies with some of the coolest gadgets, weapons and gear available in the DC Universe.

It’s finally happened. The Snyder Cut was released and you couldn’t afford to watch it. You hop onto a pirate site and download the movie. You spend a good 4 hours of your day with the movie before you delete it from your hard drive and think nothing of it.

It’s too late though. You receive an email saying that someone knows you pirated the movie and they will report you for it if you don’t meet their demands.

They sign the email off as ‘Jake’. You only know a few Jakes and suspect they may be dumb enough to use their own name. Time to get to work and figure out who’s holding you to ransom!

We need Kelex’s assistance! Use Kelex to roll for a random number out of 6. You can do this by commenting and saying “@Kelex roll 1d6”. Our friendly resident chatbot will then give you a number out of 6. This number indicates which Gadget you’ve received based on the list of gadgets below. If you’re unsure of how the gadget works, we’ve left a short description for each gadget to help you!

Now, all you need to do is take a look at the gadget and tell us how you would use it to save the day. You can be as creative as you like. I’ll be taking the best 5 answers in a poll and sharing them with you in the next installment of Tech Tuesday 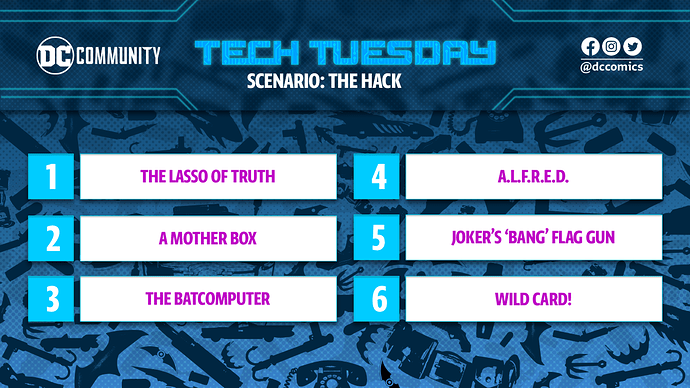 I redownload the pirate site onto my laptop. Then, I use my genius abilities (also known as saying “Batcomputer, do this”) to track down everyone that has been on the site since I started the Snyder Cut originally. I filter through everyone with the first or last name “Jake”. There are 7 different Jakes!!! What to do, what to do?! Oh yeah, Jake was stupid enough to use his first name, maybe he’ll tell me his last name, too! I email him saying:

I’ve seen your ransom and I think we could be great friends. However, my parents say I shouldn’t be friends with strangers. However, if you tell me your last name, we wouldn’t be strangers, would we?

He then responds with:

Oh of course Cameron! My last name is Barnborrel.

That was easy enough. I then send a virus through the Batcomputer (it’s okay, Batman designed it, so there’s no way he didn’t install an anti-virus) and into Jake’s computer.

As I realize I was in trouble, all I wanted was to see the movie! But who this Jake is? So I decided to use the Motherbox to help me find him and it turn out to be Sportsmaster78!
I Ask Motherbox to take me to his location, and when I’ve got there he grin, “So @Alec.Holland never added Dr. Mid-nite goggles to the gadget list, and Kelex got you the Motherbox instead When rolling the dice! Oh this is too good, gotta have your Mommy with you, huh Reaganfan78!”
I ask him not to insult me and ask him to please keep a secret about me watching Snyder’s Justice League, and promise to pay him. and he said," You’re bribing me? Wouldn’t that be a scandal if DC and HBO Max finds out about this!"
Then having enough of him breaking the 4th wall, I use a Motherbox to sent Sportsmaster78 on a different location of the earth to a swampy place Area!
Sportsmaster78 nervously grin, “Great, I’m probably gonna run into that Swamp guy I’ve heard about! This isn’t over yet Reaganfan78! I’ll be back” Then Sportsmaster78 hears a splash of water towards him, then a second later see a bubble in front of him bubbly, suddenly Swamp thing came out of the water and grab the terrified Sportsmaster78! Sportsmaster78 was begging for his life, “Don’t kill me man, please don’t kill me!” And Swamp Thing said, “I’m not going to kill you, I want you to do me a favor, tell your friends, tell all of your friends about me.” And Sportsmaster78 ask, “What are you?!” And Swamp Thing said, “I’m Swamp Thing!” And he toss the terrified Sportsmaster78 in the swampy water and dissappear!
In the meantime I’m smiling and decided to watch the new Suicide Squad movie next, after making some popcorn!
The End…

is this showing up for anyone?

So I’m guessing the JL got electricity back after my mess-up last week. So, I decide to celebrate by watching a 4 hour movie. Afterwards, I delete it and continue on my day. Then I get that email. Jake? I only know so many Jakes… I know it isn’t Jake from State Farm. He’s too cool for that.

After a while of looking through all my Facebook friends that start with ‘J’, I just stop looking. I sent the world back to the Stone Age last week. I think I’ll be okay for pirating a 4 hour movie. So, turn my email notifications off and go back to the rest of my day. Problem solved.

Yep, this is me avoiding using Joker’s gun. I don’t want it.

“Jake” as they like to call them is trying to blackmail me. So with A.L.F.R.E.D. I’ll use it to defeat there scamming with way with his simulated supperior whit and charm to get him to stop. It all feel like it was “Jake”’s idea to stop the blackmail due to A.L.F.R.E.D.‘s manipulation skills.

Well, simple enough. I reply to the email agreeing to meet whatever demands they have at a face-to-face meeting. Then, I tie them in the Lasso of Truth, and use it to dig up some dirt on him. After all, if he’s spying on my computer, he’s certainly up to some illicit activity himself. Mutually assured destruction keeps both of our secrets safe.