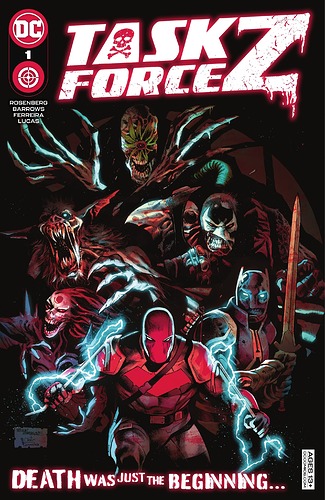 Happy Halloween with holiday arrive time to reviews of the sires Task Force Z. Jason Todd has a new, government-mandated team of misfits to lead in saving the DC Universe with Task Force Zof recently deceased supervillains from Batmanextensive rogues gallery, with a twist: While each of the nefarious figures have been raised from the grave and appear to have been transformed into ravenous zombies, the nature of their twisted new lease on unlife puts them in a weird interim state between being fully resurrected and a bloodthirsty creature of the night.

Idea that the resin could cause a significant drive towards cannibalism may come from one of the Lazarus Pit’s most noted side effects for those that use to it heal their bodies and restore life: Temporary insanity. Every time Ra’s al Ghul emerges from the life-giving waters of the pit, he is more erratically murderous than usual, menacing anyone that happens to be in the immediate vicinity. This, coupled with the tortured state between life and death most of Task Force Z finds themselves in, has led to the lethal hunger that could even put Jason at risk of being devoured by his own team.

Last team of would-be zombie supervillains that somehow carry on a more tortured existence due to the Lazarus resin. And while the government may insist that their muscle on Task Force Z aren’t zombies, they certainly display all the familiar hallmarks that make true zombies so terrifying as they operate from the shadows of the DCU to keep the world safe from Lazarus resin falling into the wrong hands.

Next issue I do next month reviews so what you thinks let comment know and happy Halloween.