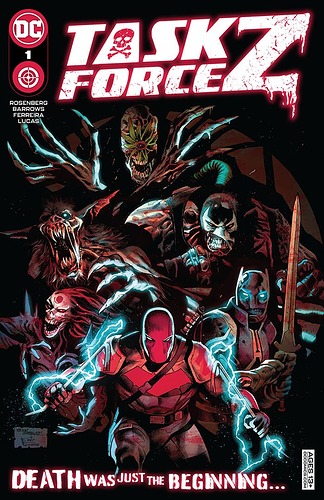 As if there wasn’t enough to worry about on the streets of Gotham City, add a crew of undead super-villains to the list.

Earlier this year in Infinite Frontier #0, an attack on Arkham Asylum—known as “A-Day”—claimed the lives of a number of members of Batman’s rogues gallery. But with crisis comes opportunity.

In the new series Task Force Z, from writer Matthew Rosenberg and artist Eddy Barrows, a mysterious benefactor assembles a new Task Force—think the Suicide Squad, but with resurrected villains instead of incarcerated ones. The team includes Bane, Man-Bat, the Arkham Knight, Sundowner and Mr. Bloom, with Red Hood recruited to lead. He’s something of a natural fit, given Jason Todd’s colorful history with death and resurrection.

With issue #1 now on sale, DC Nation spoke with Rosenberg about the influences of the series, collaborating with Barrows, what makes Red Hood the right fit for this unconventional group, and the joy of writing a giant zombie bat monster.

To read the interview with Rosenberg, head over to DC Comics!

Have you checked out Task Force Z yet? Let us know in the comments!

I read issue 1 when it was released and then let the books collect until finally reading them all today/tonight. The first issue wasn’t my favorite but it kept me interested.

After reading all of the other books, I am all in on this team. It is a Suicide Squad with zombies, which is cheesy and shouldn’t work on paper. Thankfully, the story and the surprise characters keep the cheesiness at bay.

There are moments when this story feels like a classic 80s Suicide Squad story. The way it balances between nostalgia and being its own thing is a fine tight walk but it was one that keeps me flipping the pages to see what is next.

I’m enjoying it in a goofy way. Agreed it has a classic Suicide Squad feel but with amped up gore. Really curious to see what’s going on with Bane in light of current events in the Joker title.

I honestly enjoy the craziness of the series I picket it up after getting invested in Jason Todd from his run in Batman Urban Legends.

I almost forgot about this series, I’m excited to read it! Some of my favorite comics and stories are the weird/far out ideas that don’t seem like they should work, but are written well so they do.

I have been enjoying the series. I mean I enjoy anything with Jason but I definitely laugh out loud multiple times an issue. Mr bloom is a character I dont know anything about but he has become one that I want to know more about and he has been really entertaining.