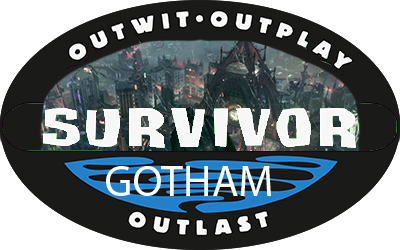 Welcome to Survivor Gotham! This will be the journey of 16 forum members as they make their way through the dark gothic city to outwit, outplay, and outlast each other. Self-preservation is key to winning this game.

2.Once players are gathered you will be randomly assigned a character

3.For pre-merge all players will be put in a private chat with their tribemates

4.You can make your own private chatrooms with tribemates of your choice

5.You cannot make private chatrooms with those on the other tribe

6.You can tell players in your tribe your character, lie, or keep it secret

7.Characters will have no abilities from the start, but after each day one person from the winning tribe will randomly unlock their ability

8.Post-megre one person will randomly unlock their ability no matter the challenge outcome

9.If you are voted or medically evacuated out of the game post-merge you will be needed at the end to vote for who the sole survivor of Gotham is

*Note the challenges will consist of forum and free online games that require no downloading. Some challenges will require set times, but it is not the end of your game if you cannot make it to such challenges.

Batman
Ability: (Spyware) Find out the last 5 comments on the other tribe’s chat. x2 use pre-merge.

Batgirl
Ability: (Bat Belt) Give your tribe or yourself an advantage in a challenge. You will learn what advantage you earned at time of use. x2 use.

Robin
Ability: (Learning Boy) Choose up to 3 votes against someone else and add them to yourself. x1 use.

Spoiler
Ability: (Spoil) Find out who someone voted for after tribal council. x3 use.

Nightwing
Ability: (Nice Butt) Get all players with a female character to vote how you want them to. x1 use. Cannot be used at final tribal council.

Batwoman
Ability: (Military Database) Receive a list of any 5 players and the character they are. x1 use.

Red Hood
Ability: (I Use Guns) During a challenge you can choose any character you want to shoot except those on your tribe pre-merge. They will be medically evacuated (removed from game), the challenge will end, and there will be no Tribal Council. x1 use.

Huntress
Ability: (To Vengeful for Batman) Get removed from your tribe and moved to the other. x1 use pre-merge. Cannot be used after a challenge until tribal passes.

Joker
Ability: (The Pencil) Effect(s) unknown. Can only be used on a tribemate. x1 use.

Harley Quinn
Ability: (Bag of Tricks) Chance of getting an immunity/fake idol or advantage/disadvantage for a challenge. x1 use.

Penguin
Ability: (Collector) You have an immunity idol, and it can be played after a challenge and before the voting starts. Play it for yourself or someone else. Whoever you us it on cannot be voted out and if correctly played the person with the second highest number of votes will be eliminated. x1 use.

Catwoman
Ability: (Cat Thief) Take someone’s ability who is on your tribe. x1 use.

Riddler
Ability: (Riddle Me This) For a trivia challenge you can prevent the other team or all other players if post merge from answering till 15 seconds pass. x1 use.

Poison Ivy
Ability: (Love Spores) Get all players with a male character to vote how you want them to. x1 use. Cannot be used at final tribal council.

Bane
Ability: (Back Breaker) During a challenge you can choose any character you want to break except those on your tribe pre-merge. They will be medically evacuated (removed from game), the challenge will end, and there will be no Tribal Council. x1 use.

Nora Fries
Ability: (Put that on Ice) Freeze any tribemate for a day. They cannot participate in the upcoming challenge, tribal council nor use their ability. x2 use.

Put in the chat bellow if you are interested in being a contestant. Thank you.

Glad to hear! Just need to wait for some more and then I can get it started.

Do you mind if I share a link with some friends???

I’m gonna wait and see how many more people will join the game. If enough people, then count me in.

I used to play Survivor games like this online, so I am in. The only issue I foresee is potentially time schedule, but outside of that I don’t see any. Will gladly join in with this!

I hope it is ok I know nothing about Survivor

Glad to see we have more people. Just as an fyi you won’t need to have watched it to get the hang of it.

I will give this a few more days to see if we have enough and I could also lower the number to 14 maybe. This community does not seam to have as much activity as some other comic forms but it does have the best tools for the game so I’m crossing my fingers.

I was thinking about @ ing them

I’m not sure I have the time. Sorry.

Thanks for @ing the group. I’m in.

I’m game to try it

What are the hours like? I wanna make sure I have time if I join.

Unfortunately, I don’t have the time to play

however, this sounds like an awesome idea, and I can’t wait to hear all about it from those of you who will be playing!! Good luck!

Sounds fun but I do not think I will be able to play. (A bit busy with stuff​