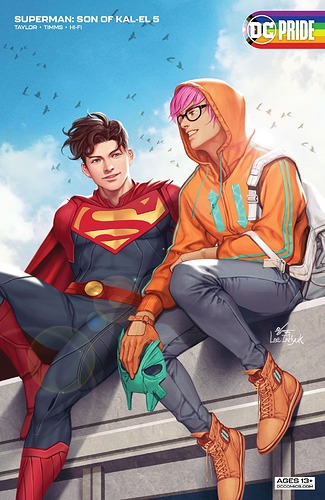 I was in London, on the way to a family wedding, when the news broke last month. “Superman has a boyfriend,” the headlines read. Everyone from my own parents to relatives I hadn’t seen in over a decade wanted to talk to me about this. Maybe it’s just because I’m known as the comics guy in my family, but around me, this seemed second only to my sister’s nuptials in the conversation.

“What happened to Lois Lane?” they asked me.

“This is a new Superman,” I explained, patiently. “Jon Kent, the original Superman’s son. Lois is his mother.”

“But how did they even have a kid?” was their next question, some ‘70s thought experiment about metal and tissue paper not far from their minds. 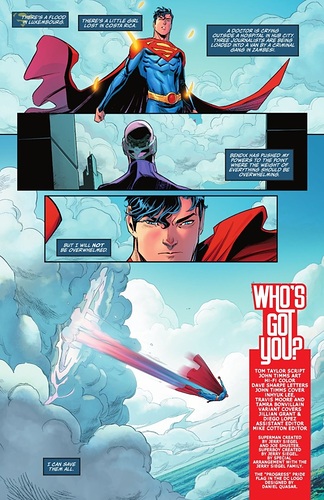 “It’s a long story. But originally, he was conceived and born during a year when Superman was depowered and Metropolis was captured by Brainiac,” I answered, summarizing Jon Kent’s origins in 2015’s Convergence: Superman.

“Okay, granted. It’s a new Superman and Lois is fine. Who’s the boyfriend?”

This was the point where I ran out of answers. Sure, we’d gotten a few glimpses of Jon Kent’s pink-haired paramour, smooching Superman in that splash page from Tom Taylor and John Timms’ Superman: Son of Kal-El #5. But who was he, really?

To learn more about the mysterious Jay Nakamura, head over to DC Comics!

Have you picked up Superman: Son of Kal-El #5 yet? Let us know in the comments below!

Have you picked up Superman: Son of Kal-El #5 yet?

I have! I sat outside the comic store Tuesday morning in my car, waiting for them to open, and once the clock turned 11, I popped in and grabbed my copy.

I haven’t read it yet (Blue and Gold #4 and Nightwing #86 were my top reads this week), but I am very much looking forward to it when time allows.

Hey I wrote this

I’m going to say there’s a 100-1 shot that we get to the last page of the Annual and it is revealed that Jay is working for Luthor.

Have you picked up Superman: Son of Kal-El #5 yet?

I’m excited to learn more about Jay. Especially his backstory and his phasing ability. There’s a lot to learn about him.

I just hope Taylor doesn’t pull the rug out from under us. Let Jon be happy please!

Hilarious you say that @CaptainYesterday, my coworkers and I think the same thing. 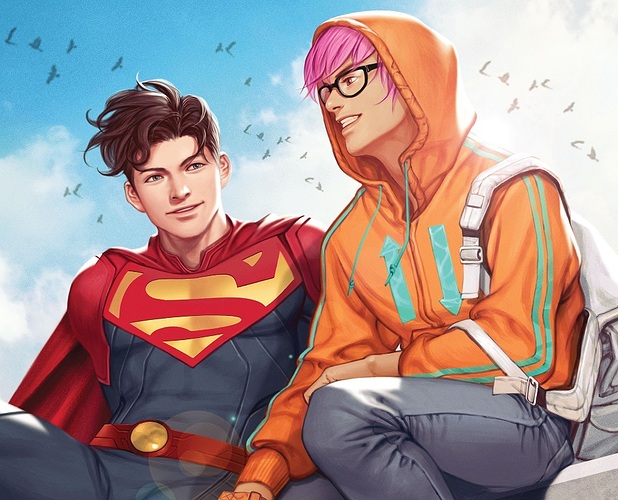 I was in London, on the way to a family wedding, when the news broke last month. “Superman has a boyfriend,” the headlines read. Everyone from my own parents to relatives I hadn’t seen in over a decade wanted to talk to me about this.

Jon Kent is not “a gay Superman”—he is a bisexual Superman. That is an important distinction. Jon’s budding relationship with Jay doesn’t negate, for instance, his romance with Saturn Girl in Brian Michael Bendis and Ryan Sook’s Legion of Super-Heroes. Hard as it is to believe, there are still some people in this world who believe that sexuality is binary. You’re straight, or you’re gay. But sexuality is much more complicated than that. People are much more complicated. And comic books are even more complicated. If comics can provide a place for a 12th-level intellect Coluan who can bottle alien cities, then they should have no problem reflecting that there are people who can feel attraction to more than one sex. Or even attraction to no sex at all and thousands of other configurations of sexual identification. When we examine ourselves, we’ll find that there are as many ways to feel about people as there are people on Earth to have those feelings. And it is a good, true thing that our heroes reflect that.

Yep, and this is why I feel that what they’re doing with Jon works so well.

In that, if you were going to create Superman in the 21st century, this is pretty much what you would do.

He’s like the 20th Century Superman, only slightly different.

Have you picked up Superman: Son of Kal-El #5 yet? Let us know in the comments below!

I got it digitally and I thought it was a decent issue.

What the big mainstream media doesn’t understand and we funnybook readers have known for decades, is that at any moment this could all be retcon’d out. 5 years from now, Jon might not even “exist”. It’s a good book by a solid team, I trust the creators and I’m along for the ride.

A thought on the mainstream reaction:

When the news first broke, if only a fraction of those who weighted in, both pro and con, were actually reading Superman comics, Superman would be selling in the millions.

Of course, as it stands, SUPERMAN/ACTION COMICS sells about 35,000 copies a month give or take.

A thought on retcons:

I have been wondering where they were going with all of this, and how could they possibly get out of it.

I was wondering the same thing with Jace Fox as Batman: where were they going with it, and how could they get out of it?

That one is pretty clear now. With Jace moving to New York City, there’s the out for them right there. They can run I AM BATMAN for another year or so, let John Ridley tell the story he wants to tell, and then just have Jace hang up the cape and cowl and be done with it. And Bruce Wayne will probably be back in Gotham City as Batman by the summer. So that one is pretty easy. And of course BATMAN is the comic that’s keeping the lights on at DC.

Superman though seems kind of tough.

There’s rumors going around that Superman is going to be killed (again), and I can totally see that happening. Because I can’t really think of anything storywise that they could do to boost Clark Kent Superman sales.

They’re not going to make him gay or anything. They can’t marry him to Lois Lane, they already did that trick back in the 90s. He’s given up his secret identity and no one really cared from a sales standpoint. I suppose they could change the costume (again), but what would be the point?

So from a storytelling standpoint I have no idea what they could do with Clark Kent Superman. Just telling “good Superman stories” I’m no sure is the answer, because I don’t believe there’s that big of an audience for that.

For BATMAN there’s anywhere from 100,000 to 120,000 people there for just “good Batman stories,” that’s the baseline. You don’t have to do anything special with Batman and it’ll sell that month in and month out. And for SUPERMAN there’s 35,000 to 40,000 people there for “good Superman stories.” That’s the baseline for Superman. So how do you triple that?

Kill him, I guess. It worked in the 90s so it may work again.

And just do prestige Black Label series for Clark Kent Superman going forward, and charge $7.99 a pop for a 48-page issue or whatever.

And run Jon’s story for another year or two. And then I guess reboot everything (again).

What the big mainstream media doesn’t understand and we funnybook readers have known for decades, is that at any moment this could all be retcon’d out. 5 years from now, Jon might not even “exist”. It’s a good book by a solid team, I trust the creators and I’m along for the ride.

No! The hell you say.

I read #5 yesterday and it was good. I’ve said it before, but as an ardent Wildstorm fan, its neat to see Henry Bendix as the foe of Jon’s initial adventures under the Superman moniker.

I’d love to see more WS folks pop by to say hi to Jon and get in on his adventures.

Yes! I know Apollo and midnighter are hanging out with Clark Kent Superman right now but the Wildstorm universe works well with all Supermen

the Wildstorm universe works well with all Supermen

Jay Nakamura as the Blue Arrow? “…Look to the Stars, for Hope burns bright!”

BTW I never really got into Superman related stuff until Melissa Benoit as Supergirl. I’m more of a Flash fan. But, the issue of retconning would equally apply to Older & Wiser Clark. It’s really about the investment from a corporate standpoint. Superman starts with others like; Jay Garrick and Alan Scott. It’s good to have a next gen version. That said, who’s to say Jon doesn’t become as popular as Barry Allen? The real question is, “Why was Superman popular for conservatives?” An alien child landing in a spaceship on a small farm? Sounds like a sci-if Red Scare. And there is Red Son Supes as well!

Clark is a farmer. We conservatives love farmers.

Clark refuses to make himself ruler, and we conservatives love Cinncinnatus.

Clark is a loveable guy, and we conservatives love that.

Reading it, I think the situation that Jon is in is honestly more interesting than the character of Jay himself, at least so far. But, I’m willing to be convinced about this new guy.

I am assuming the Roman, Lucius?