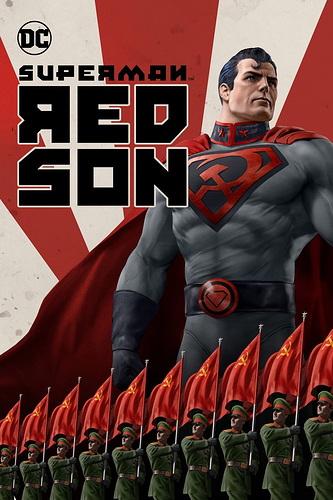 I did like this movie a lot and would put it up there as one of my favorite DC animated movies now.

I get that they want to put a spin on things to make it fresh for the viewers or to fit into what else is going on in the animated universe along with having to sacrifice parts for run time, but I would love to get just a straight up version because the originals are already great and just want to see a movie version of that.

The loss of Lana gave more wait to his decision to lead than the how it happens in the comic, still good but felt it worked better here.

How Stalin meet his end.

Superman’s ageing not appearing so drastic if at all. With how things end in the comic I think him not aging so fast would have worked better.

The Amazons staying out of the battle.

Lex being portrayed in a more compassionate light for most of the story and his relationship with Lois being healthier.

On the fence on whether I would have gone with Superman realizing he’s like Brainiac on his own or with the letter from Lex.

Things I wished they hadn’t left out:

Really the only thing I would have added that was from the comics is the end. It is by far my favorite part of the story. If I were to change anything from the comic it would be those last few panels. Instead of him being sent back to the same place in time, I always thought it would have been cool if this go around, he landed in Kansas to give you hope that things may actually change in the future. You could say that without the time loop aspect the story doesn’t work but I always liked to think that future would still have been his past and he would be creating a second loop that would be linear after coming full circle again.

As I said I loved the movie and enjoyed the changes. If they had added the actual ending I might even like it more than the comic. I am probably in the minority in that I liked the animated Hush more than the comic. Still would love to get a 100% adaptation of something one day. Year one is pretty spot on though.

Yeah I never got the sense that it was pushing a communist agenda either. I can see how one might look at it that way but didn’t get those vibes myself.
While I’m always on the WW-SM being together team, I thought it worked well for this story plus they don’t get together in the comic for this either. If they had been together in the comics, that change would have bummed me out (love when they are together!).
I thought about throwing in that I would have liked Hal’s back story which I do like the POW story but like with parts of The New Frontier, I think the decision was based on run time maybe. While a good part I don’t think it hurt the movie not having it.
YES!! I would love to have a White Knight movie with the voice cast from BTAS! Curse of the White Knight is going amazing as well right now.

I gotta say…I liked Red Son more than I thought I would. I don’t like the mini-series it’s based on. I feel it’s a decent Elseworlds story but it’s vastly overrated.

I think the voice acting really brought out the depth and emotion of the story. Jason Isaacs is such an out there choice for Superman but he did an outstanding job! He has to work through an accent but there were several moments I forgot it was Isaacs and just thought of him as this universe’s Superman.

I know some people are going to be disappointed by the omission of a certain part of the ending, but I was okay with it. I never liked the mini-series’ ending. It felt like Millar going for a twist for the sake of one. Doing away with it and focusing on the ending they did made more sense for the film as a whole.

When is it coming to dc universe?

Agree, Isaac did a great job with the voice acting. I did like the end and thought it worked, but I’m a fan of the original ending and would have loved it if they had kept it. It worked though and would say ending it there makes for a great ending as well.

Not sure. I think the new Wonder Woman movie took 3 months to get on here so possibly same time frame for this.

I literally just watched Superman: Red Son. And I am sadly disappointed

I liked the book better. The ending when lex convinces Superman the evils of communism outweigh the good was so cool and the fact that earth becomes Krypton.

1. Did you like it?
Yes, I really enjoyed the movie. I thought there were some moments the animation was amazing.

2. Have you read the comic?
Yes, one of my favorite comic books and always on my recommendation list for new readers.

3. These animated features tend to deviate from the original story somewhat. Were there any changes that you liked or thought made the story better?
I really loved how they did the death of Lana. The animation was beautiful, and it was so tragic you can see where Superman was coming from in the beginning of his reign. The gravitas of the moment was felt more due to the animation of Superman’s grief.

4. Was there anything left out from the comic that you would have liked to have seen in the movie?
I would have liked Hal’s story, show Superman’s age through the decades, and keeping the ending as it was in the last few panels.

5. Is there a story that you just want a 100% accurate adaptation of?
Blackest Night, we need more Green Lantern stories animated.

They only thing I think I would want 100% adapted 100% panel for panel, would be an animated COIE. It would probably have to be a 3 or 4 movie or let the dog a 12 episode show we’re the runtimes per episode is 25-30 minutes might have to change that if their were any double sized issues. (I’m pretty sure death of supergirl was a double issue.

I’m not convinced that it would be the best way of doing COIE, but, if anything is worth doing that 1-1 or 100% page to screen conversion, I’d like the to try COIE. It has so many worlds

The fact that CW did COIE in 5 episodes was remarkable I’d love to see COIE get a similar 5 star animated series/films out of it.

Awe that’s a bummer you didn’t care for it. I’ve been on board with most of the animated.
3. Yeah I get that with the run time. I think I threw that in on my review as well.
4. Same here, I love that ending. If ya see this post and have time to kill check out my thoughts on the (scrolls up) 2 post in regards to another possible ending that would have been cool I think.
5. I’m right there with ya on White Knight. Was blown away when I read it.

Sorry for just seeing this and thanks for sharing.

I really like the movie as well but yeah Lex and sups conversation and the comic ending are great. I still think how the movie ended it a little early was well executed thought.
Thanks for joining in on the discussion!

Agree with you on all fronts. Really liked the spin they did with lana and feel it was better than the way it goes down in the comic as far as emotional motivation for him to get involved. It would have been very cool to see Hal’s part from the comic for sure. I’m a big JL fan but GL is at the bottom of that list for me so I was ok with it. (Sees #5 comment)

Forgive ME!
Thanks for sharing your take on it!

Yeah I really loved the animation as well. I really dug the N52 look but got burned out on it these last couple of years. Really glad we’re getting a new look with the Superman film coming out this year (or next IDK). Right there with on #3 Lana and Bats new take was my favorite change and really, I think its done better here than in the comic. #5. ? There’s a bunch of rebirth that I’ve not read. Will have to check it out thanks. Thanks for joining in the discussion and sorry for the late response IDK how I missed these.

I think the only one from recent years I didn’t care for was the JL vs. the Fatal Five. Really though it was not bad I just wanted more of the JL and less Cruz. I liked the character in the beginning and thought her back story and emotional struggle bc of it was interesting, but I just got burned out on it. Hush was a good example to me of a alteration that was better than the comic. In the comic it’s just so on the nose that its T Elliot. I really appreciated the spin.
Thanks for stopping by!

Mr. DeSade! Thanks for sharing your take evil Sir!

Your memories better than mine. It’s really sharp with other things but with comics it’s like in one ear and out the other. Right there with ya on the COIE adaptation! By the way whats COIE stand for? Just messin. It’s definitely one that deserves to be handled right. and a 12 eps run would be great. I also feel that way about injustice and white Knight. Things like KC I think would be best done as 2-3 part movie. I didn’t care for the CW COIE, I own every season of the flash but bailed on this season. Just don’t care for there shows format, too much filler for me.

Hey! you stop that now ya here!
Thanks for jumping on man always enjoy reading your take on things