There have been so many Superman origin stories and I’m interested in seeing which one everyone prefers.

I prefer the Man of Steel origin by John Byrne.

John Byrne’s The Man of Steel.

I’m tied between Byrne’s Man of Steel and Johns’ Secret Origin. I loved the Man of Steel origin because that’s the one I grew up with. I was aware of the Golden and Silver Age origins when I was younger but the origin Byrne set up in the comics and the stories that came from that were the ones that were in the comics when I was a kid. Johns’ Secret Origin was an amazing story taking all the best bits from various eras and putting them together in a cohesive story.

In addition to those listed above, I think the origin in Superman: Birthright is really well done. I would have liked to have seen Waid continue on with that story a bit longer.

@rex.mason You know, it’s funny, when I think about Birthright, I didn’t like it at first. I felt like it was an unnecessary reboot, given the time. But I’ve gone back to it with all that baggage put to the side and I really enjoyed it on second reading. I think that would make for an outstanding animated movie!

I grew up up Bryne’s Man of Steel, so I’ve got a big soft spot for it, but I think my favorite is Birthright

superby1: That’s interesting. I didn’t read it at the time it came out and only read it recently on DCU.

I got into comics around the tail end of “Crisis On Infinite Earths” so I remember reading John Byrne’s “Man of Steel” but I really liked Geoff Johns and Gary Franks’ “Secret Origin” series.

@rex.mason Yea, I was surprised how much I liked it the second time around.

Man of Steel is always going to be the one I think of first because that’s what I grew up with.

I’ve been making my way through Superman origin stories, thanks to all these comments. With so many people praising it, I think I’ll have to check out Man of Steel next!

Personally, my favorite (out of the ones I’ve read so far, obviously) is Secret Origin. While Birthright is good, the outdated use of the internet makes it feel less timeless, and I’m not 100% on board with the characterizations of Jonathan Kent and Lois Lane or how Superman is a vegetarian (I’m not against vegetarians, just felt like a weird and unnecessary detail that Mark Waid shoved in there). However, Birthright does have an amazing first act that really sets up why Superman is Superman, why he helps people, and why he doesn’t wear a mask. I also loved what they were trying to do with Lex Luthor, but I feel like it wasn’t actually executed very well in the story. But man, that last scene… that’s something special.

However, Secret Origin just feels more timeless to me. I love how it embraces all of Superman’s history, including Superboy and the Legion of Superheroes, without it feeling out of place. I especially love how Superman inspire Metropolis to stop groveling at the feet of Lex Luthor.

When it comes to Superman: Secret Origin, I’ve always felt that would be a fantastic blueprint for a future Superman movie, specifically issues 3-6. If god forbid we HAVE to have a reboot of DC films in ten or twelve years, using the opening of issue three where Clark first comes to Metropolis and the Daily Planet would be a great way to start the movie. That whole story is cinematic in scope so it could be fun to see them adapt it to the big screen.

Agreed on the ending of Birthright being fantastic.

@CaptThunder001 American Alien is on my reading list. I’ll get to it… eventually. There’s just so much to read.

The one where he’s an infant, rocketed to Earth from a dying planet.

I honestly can dig most versions of the origin story EXCEPT for Man of Steel. Honestly, I just don’t like John Byrne’s take on Superman at all – his take on Clark and especially Luthor seems completely counter to what I think the characters and the world should be.

A dark horse candidate that I would throw out is Grant Morrison’s take on the origin in Action Comics during the New 52. I loved how while Superman was still good, he was flawed and rough around the edges. He was young, brash, and just arrogant enough to think he could change the world with his bare hands. But when life is thrown at him and things go bad, he’s humbled by the experience and learns and grows as a person and as a hero, while still keeping just a little bit of that brash nature when called for it. 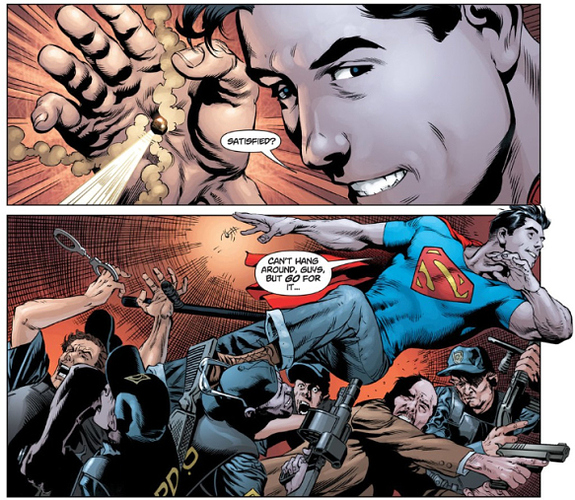