Dorian Black here. I’m going to be participating in a Facebook livestream for Nerdbot Media this Tuesday to debate why Superman is better than Goku. I have my own arguments set up detailing why I think Superman has the superior mythology, but I wanted to hear everyone else’s opinions as well. 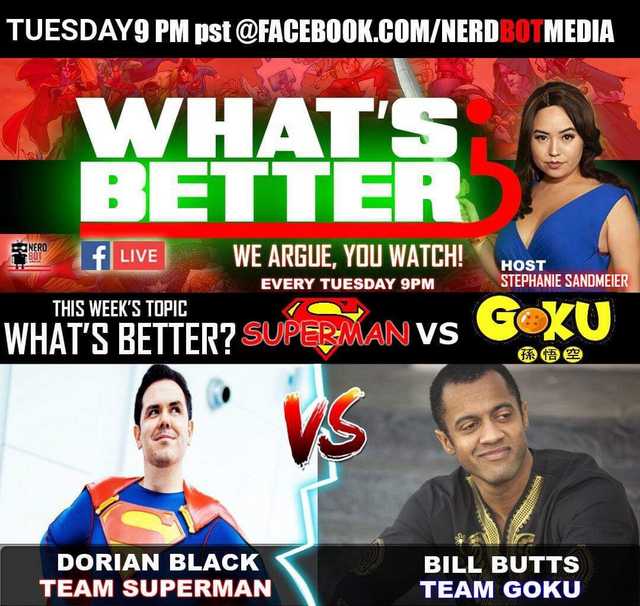 Dorian Black…now that’s a superhero alter-ego if ever there were one. Or a great villain name too, but I’ll lean on the side of the angels.

Anywho, as a massive fan of Superman and anime that has absolutely zero interest in DragonBall Z, I hope you deliver a super knockout to Goku.

Superman is an embodiment of virtue, justice and doing what’s right. Despite the attempts of the Too Cool for School crowd, those things are never “out of style” but rather, they are as contemporary as things can possibly get and are emblamatic of good and decent human behavior. Being a good and just person never goes out of style. Ever. Period.

Superman has a generational legacy that’s endured for just over eight decades. If Goku is still popular and appearing in all manner of media and merchandise and a continued household name when he turns 81, I’ll be genuinely surprised.

One thing I think is worth noting is that Superman is a MUCH better father than Goku has ever been to his kids.

“Better” is so vague. It really depends on the eye of the beholder and what trait that person prizes. What if I don’t care about fighting skills or origin story? What if the only true thing I prize in a being is the ability to cry on cue?

It all just depends.

I for one never get bored while Superman is punching people. He has the courtesy not to do it for ten minutes straight.

@biff_pow That, and Superman and his allies don’t stand around with mouths agape, while saying with a shudder “I…I’ve never…seen that before!” for the duration of the story.

Superman also doesn’t find it necessary to name his different punches and yell it out during a fight.

THAT I’d be ok with, though. Exploding Krypton PAAAAAAANCH

I guess I do this now. I name Superman’s punches now.

Child: Grandpa Biff Pow, my artificial womb said you used to be an important writer.
Old Man Biff Pow: That’s right test tube descendent. I named all the punches on the big superhero anime shows.
Child: Wow, and then you would write about the hero punching the bad guys hair off and…
Old Man Biff Pow: No, no. I named punches, and kicks and other power moves. It was an prestigious position.
Child: And, then you wrote about the bad guy building a giant…
Old Man Biff Pow: NO! I named punches. I was at the top of my field I tell ya. Enough questions, go eat your Impossible Burger it tastes just like meat.
Child: Grandpa, even I know that’s bull$#!£.
Th End.

In terms of character, probably Superman. In terma of strength (current nerfed Superman), I don’t know. I don’t really pay much attention to modern day Superman’s feats. I just read for the story.

That was beautiful, @msgtv, thank you. I’ll name a punch after you.

Supes would flick goku to the moon and then bang gigi on top of the source wall, while goku takes 3 episodes to power up. Get outta here with that goku garbage.

Superman would not bang Chi Chi!