Personally I love them both very much. Theres absolutely no reason to hate on Richard Lester. It was those idiot Salkinds that screwed over abd fired Richard Donner. Lester was hired to a job and like the professional he was he did just that.

PROS- Unique charm. Brilliant and smooth melding of action, drama and comedy. The man had a rare talent of being able to damn near perfectly pull this off. That’s not something everyone can do.

NEGATIVES- Sometimes let things get a little to goofy and cheesy, fortunately not often. Honestly thats all I can think of at the moment. You guys can fill in the blanks.

PROS- One of the previous centuries GREATEST directors. Yes kids, Mr. Donner’s name goes right up there with Spielberg, Cameron etc. His legendary style is the foundation for the greatness that the first two movies stand on. Superman was his “Star Wars.” He had a vision for a trilogy and if the damn Salkinds would’ve just let him be to do his thing… Good Lord, we can only imagine the wonders the final product would’ve given us.

NEGATIVES- From what I understand Mr. Donner is a very sweet man, however he’s very bull headed stubborn. Though the Salkind’s are very much to blame, a lot of the riffs between them and Mr. Donner probably could’ve been avoided had he chilled and at least listened a little bit more.

Like I said above I love both cuts dearly. We Superman fans are blessed to have two spectacular versions of one helluva great movie. In my case TWO VERSIONS of my ABSOLUTE FAVORITE MOVIE! Mr. Lester came in and did the job he was hired to do… and damnit he did one helluva job! It’s the version we all grew up with. The one many of us saw in the theater, and watched as it debut on network television, where our minds got blown all to pieces as scenes from the Donner Cut where plastered all throughout the movie. Sorry Jodi, the little British kid from East Houston, Idaho, Non kills you dead and my brain nearly exploded as I witnessed it happen.

Anyway Id love to hear yalls views and opinions on the Superman II’s. All this never ending blah blah about the JL Snyder cut which may or may not exist. Screw the Snyder cut BS. Herte we have a DC movie with two very much verified cuts (though that wasnt always the case cough 80s and 90s rumor mills).

Lets talk about its greatness, shall we?! 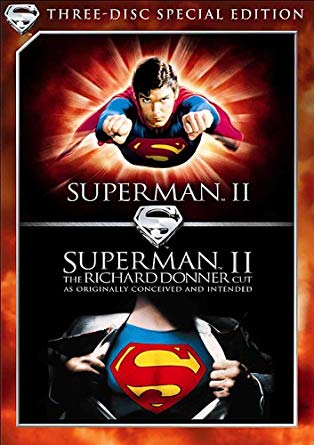 When did that three disc SE come out? I never saw that in my movie collecting days. It’s rare to see both cuts together outside of box sets.

I like both cuts a great deal, but the theatrical one just a bit more than the DC.

Oh and @Vroom I honestly don’t know if its been released yet.

I love the opening of the Lester Cut.

Me too! I used to watch, rewind, watch, rewind. Rinse and repeat. When I was 5 or 6 I would take my tape recorder and record it off the TV speakers. I’d get as much as possible and listen to it over and over again for hours. I’m telling you I was obsessed with this movie. Still am to a certain degree.

Can’t find a gif of the opening credits. Theres got to be one out there, but I’m not feeling like hunting right now. But heres this one…

The recap of STM in the opening credits was a revolutionary idea (it influenced Spider-Man 2) and the whole Paris sequence is just fun.

Got to love when Luthor is relieved to see Superman. “Oh thank God!” he says under his breath.

Interestingly, the cut that aired on TV is the one I grew up watching over and over (I was just barely too young to have seen it in the theater), so when I watch the theatrical (Lester) cut on DVD, I miss the added bits and it always feels a little strange. The Donner cut, on the other hand, has many of those missing bits, but also adds a lot of other stuff (which I love seeing) and is structurally somewhat different.

Therefore, I enjoy both cuts immensely, and would never be able to choose between them, but the 10-year-old inside of me always feels like something is missing no matter which cut I’m watching.

Maybe the TV cut of Superman II will get a home video release at some point.

:You will bow down bnefore me, Jor-El. Both you, and then, one day, Jor-El your Ass, er, Heirsssss."

@Vroom “I believe this is your floor.”

@Vroom In the meantime…

Sorry, I did not like the theatrical release of Superman II. It was a major disappointment for me, especially since I had liked Superman: The Movie as much as I did.

Many years later, I finally saw the Donner Cut, and thought, why the hell was that not allowed to be finished in the first place??? It was vastly better, although not perfect because it had to depend too much on the theatrical material to finish it. In some cases, those parts did not fit properly, but was used anyway. Still, the Donner cut is a much better movie, to me.

@DCCC Thanks for that footage! It’s fascinating.