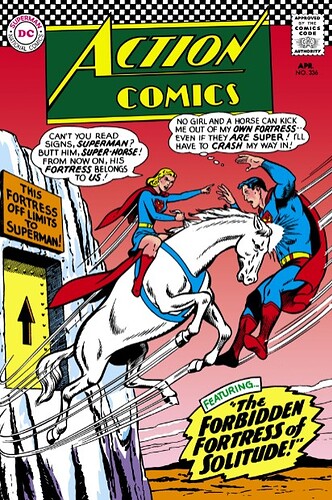 Our mission: seek out all the rare Silver and Bronze Age Superman and Family gems that our sister entity DC Universe Infinite offers and read and enjoy together! Plus…we also have two Listen Alongs a month on Wednesday evenings featuring the Adventures of Superman Radio Show of the 1940s!

And be sure keep an eye out for our twice a month Wednesday evening Listen A Longs of the classic 1940’s Superman Radio Show adventures (in the Watchalong aisle). 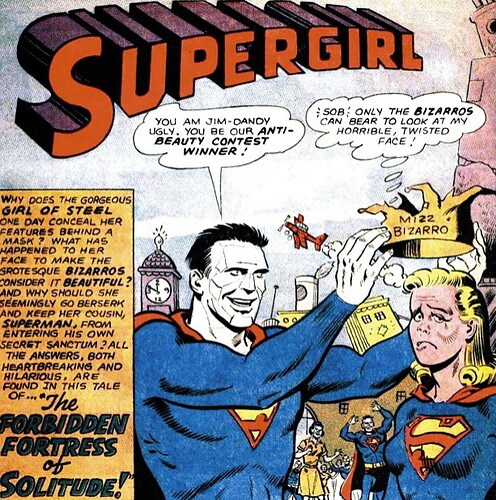 ACTION COMICS (1938-) #336 (released April 1966) DC UNIVERSE INFINITE Could provocative covers like this from the ‘60s be the ancient origin of “clickbait?” “THE MAN FROM THE PHANTOM ZONE!” After serving his sentence in the Phantom Zone, Ak-Var is released by Superman. AND, over in Supergirl’s corner of the comic, Part 2 of the Intergalactic Beauty Contest, Girls Gone Wrong!!! Strap in, this is one of the most Bizarro plots you’ve ever seen in these, and that is saying something!! 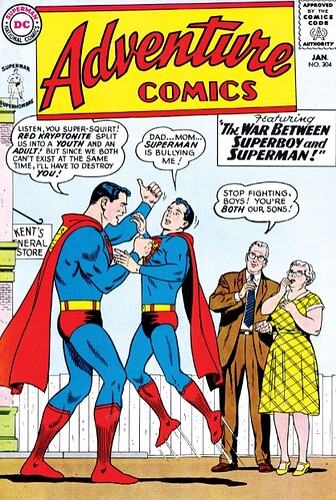 Adventure Comics #304 (released January 1963) DC UNIVERSE INFINITE It’s Superboy versus Superman—and only one will remain! (you may want to bring your favorite set of crayons for this one) and, if you want to read the other story in this issue, dig in for that as well- I will say 1) it’s Legion and 2) at least that part is in color! 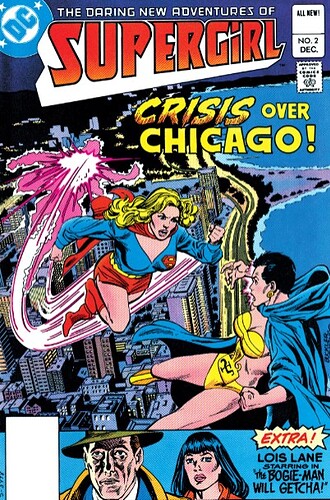 (pick which woman belongs to a cult from the above) Daring New Adventures of Supergirl #2 (released 9/1/1982) DC UNIVERSE INFINITE Supergirl continues her battle in the early 80’s (before dying in Crisis on Infinite Earths a few years or so later) with Psi, a girl with powerful abilities who has been brainwashed into believing that Chicago must die, and also deals with her new friends where she is rooming in “Crisis Over Chicago.” If you can’t relate to Supergirl’s adjusting to a new living situation, then all I can say is, you’ve never battled someone 500 feet in the air over Chicago, and you totally should get out out and away more. AND extra, extra, there’s a Lois Lane story here too!!! 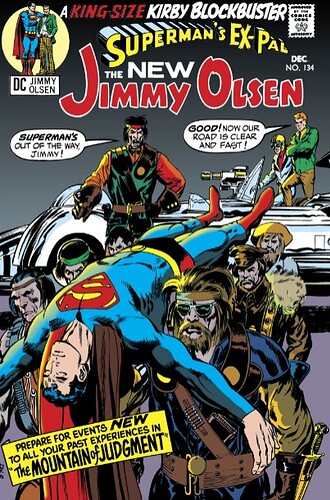 The Jack Kirby 4th World Rollout in the pages of Superman’s Pal Jimmy Olsen continues! “THE MOUNTAIN OF JUDGMENT!” 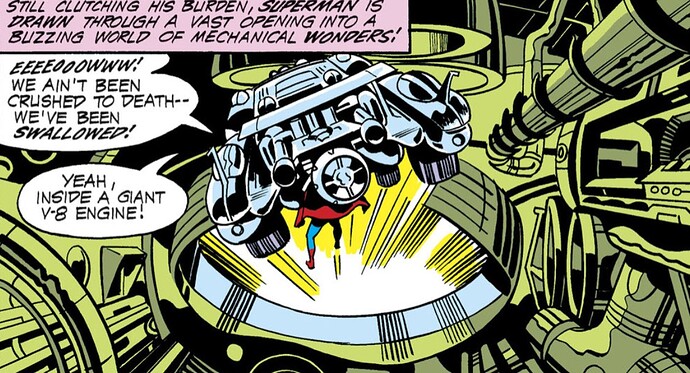 (can someone explain to our members under 50 years of age what a “V8” is…no, it’s not a veggie drink…)

Superman, Jimmy Olsen and the Newsboy Legion travel to the Mountain of Judgment, a giant converted missile carrier that is also the mobile base of the Hairies! 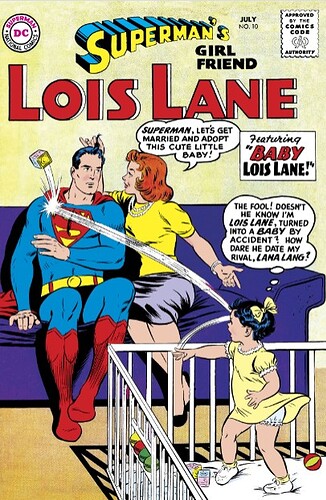 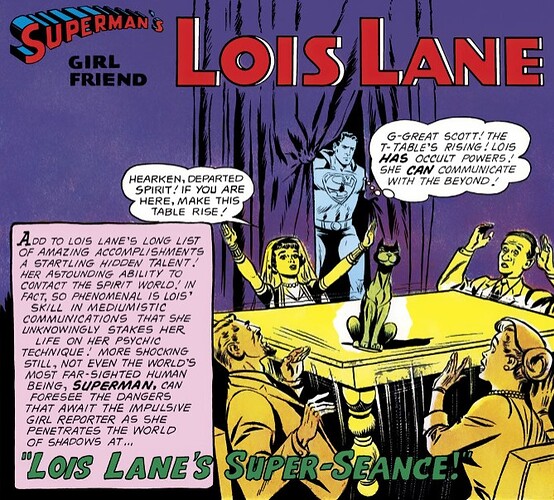 Lois unfortunately skipped watching The Conjuring series, or she would know to avoid playing around with this stuff…and look out for the cat, Lois, it’ll drive you c r a Z y!!!

Please consider sampling some or all of these classic Silver and Bronze Age wares, and let us know your thoughts! Feel free always to post favorite panels / scenes etc from these exciting, entertaining and imaginative tales.

You just can’t make this stuff up…but I guess somebody did.

A full year has passed of Superman and Family Silver and Bronze Age wonder!

Wow what a way to celebrate an entire year!! These comics are bonkers and more so than usual! Looking forward to checking all of these out!

I have to say, I read just about everything listed in this club, I try to respond and usually get one or two in, but got so much going on. But, rest assured, I’m reading. Now to save this to my list.
And thanks, @Don-El for putting in the work to make this go.

Looking forward to what you’ve got next in store.

I can’t believe it’s been a year, where does the time go? I wish that time passed like it did in childhood, when a year felt like a lifetime instead of the blink of an eye. Lol!

Thanks fellow KSC guy! I appreciate both your patronage AND fun commentary on the selections, we’re all in this dangerous intiguing exciting Silver Age Safari together! So very true! If I hadn’t left myself a note I wouldn’t have realized it lol.

Thanks very much, we’re glad you’re here on the Silver Age Safari to protect us from the Webbie bad guys!!!

30 years in the Phantom Zone for attempting to steal the Sun Stone? To paraphrase Sideshow Bob, “Attempted robbery, I mean really what is that, do they give a Nobel Prize for attempted chemistry?”

Red Kryptonite, Kandor, Super Hypnotism, Phantom Zone, Super Imposters, yep we are in the high Silver Age. Pretty good one from Edmond Hamilton and the Swan/ Klein dream team are excellent as usual.

Another change of heart by the villain in the backup. It’s always great when the little acts of kindness wind up saving the day later. Our lesson, read the whole note! Otto Binder and Jim Mooney are great as always. And the Red Krpytonite again, Superman has long boxes of this stuff now stacked in the fortress all labelled as to their effects.

Letters to the editor!

Here’s one reader that finds your two and three part stories to be refreshingly short after what (Marvel) has been doing! Their stories all seem to drag out over 8 or 9 issues and instead of ending cleanly they just start another adventure in the same story. That’s why I’ve dropped those mags, I just can’t stand their endless serials which are really interminable soap operas!

Is it really true that collectors are paying $30.00 and up for old comic magazines?

Editor: Yes and at a comic collector convention last summer a copy of Action #1 was auctioned off for $40.00. And collectors I’ve talked to say it’s worth at least twice as much!

Lots to love again for sure in the Silver Age of Superman and family!

Thanks for sharing some letters page content. These comics are historic rare documents and everything should be scanned / photographed, including ads and letter pages.

I do understand the appeal of only seeing the art and story, I edit out most of the commercials of the Adventures of Superman radio show Listen Alongs we enjoy 2 times a month for free here on DC Community. Maybe there is an easy way to have both, but the letters pages especially we need!

This is one of my oldest copies of Adventure Comics. So I get to read it in color.

I’ll give credit where it’s due, Roz-Em comes up with a pretty solid plan. No “where is the son of my jailer he must die!” as he wrecks up a city. He observes, gets a lot of information, comes up with a plan and executed it pretty well.

What he didn’t count on was a little detail exposed by Lana Lang’s Jack Benny inspired violin skills. And the real talent, Krypto, has a role in saving the day.

The backup is a Legion classic that I’ll save my comments for elsewhere.

From the Letter Page

Dear Editor,
In the Legion story about Bouncing Boy you show him buying a bottle of soda pop for 50 cents. Isn’t that a little expensive?

“CRYBABY OF METROPOLIS”
You can practically hear the I Love Lucy theme when you crack open these comics.

First of all, Kurt Schaffenberger is my all time favorite Lois Lane artist. I like how the Daily Planet has Superman’s schedule for the day. I wonder if that column is written by Clark Kent? Back then the criminals of Metropolis were such a scared lot so Superman had time to do charity functions. Lois you can stop crying for your mama, she won’t be invented for another three issues. She hasn’t learned the lesson not be curious before Superman, what makes you think she’s going to stop now? I believed her thoughts of “I swear I’ll kill him!” as he fed her a bottle in front of Lana. I guess “Papa spank” works better when it’s an infant.

This scheme isn’t as easy to pull off when you don’t have Google Image to help out. Petty crime can be a lot more fun sometimes. These days Dino would be an agent of Leviathan and there would be some deadly showdown at the end.

I’ve heard of criminals being a superstitious lot but this one takes the cake! Perry needs to ease off the Caesar worship a little. I’m not so hot on his Superman, but Wayne Boring draws great criminals.

Ralph Edwards drops a note thanking DC for using his tv show “This is Your Life” in a recent issue.

Keep those cards and letters pages coming! Your tie in with the culture / history of the time is much appreciated, @CaptainYesterday !

We just won’t see stories like these published as new today for loads of reasons, but wow did the writers’ and artists’ imaginations get a chance to SOAR in these issues.

The audacity of these stories reminds me of the daydreams of “The Secret Life of Walter Mitty.”

Kirby’s here! But, since Neal Adams is the hottest thing going, he’s still doing the cover.

That S must stand for Squaresville man! Everybody wants Superman out of the way until there’s a bomb about to explode. All kryptonite on Earth will be destroyed next month in Superman #233 so surely he won’t have to worry about that any more.

The design of everything is, of course, awesome. The route to the Mountain of Judgement is a real trip, in two different ways. Jimmy is willing to do just about anything to get his story, which is a trait he still has decades later.

I like Morgan Edge, but who is that plain helmeted guy “Darkseid” he’s working for? He doesn’t even seem to be that mad the plan failed. In my day, villain leaders choked out flunkies that failed their assignments!

One reader wonders if the Daily Planet only has a five person staff. Where is the publisher and the rest of the people at the newspaper? Of course, a major change was just a month away.

I wonder how The King felt about young whippersnapper N Adams doing the cover?

We’ll have to see if Jimmy Olsen will quickly reflect GBS and No More Kryptonite.

As we prep this reading for archiving, please note that the Action Comics story is the first appearance together of the team that would become the Kandorian “Nightwing and Flamebird.” 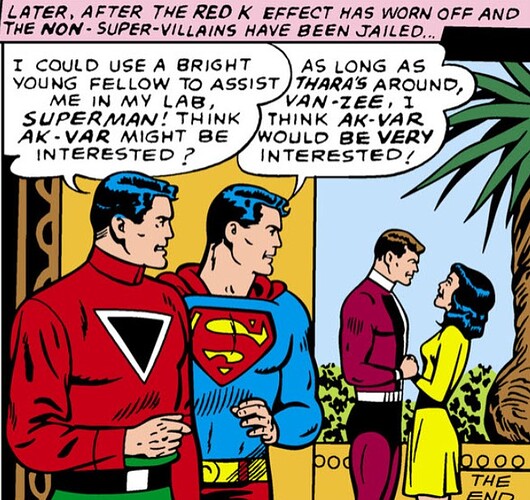 Van-Zee, the Superman “look-alike” took up the role of Nightwing full-time. Ak-Var the Phantom Zone criminal who had served his sentence and returned, later assumed the mantle of Flamebird.