[Superman Fan Club] and really anyone who wants to, can, welcome to the World’s Finest ever Bronze Age with a hint of Silver (age) tales of Superman!

Oh…and if you are very very brave and bold , go ahead and check out faithful [Superman Fan Club] member @darkstarz ‘s House of Horror Club posting this week that features the Super Family, House of Horror 23 - Superfamily Horrors! 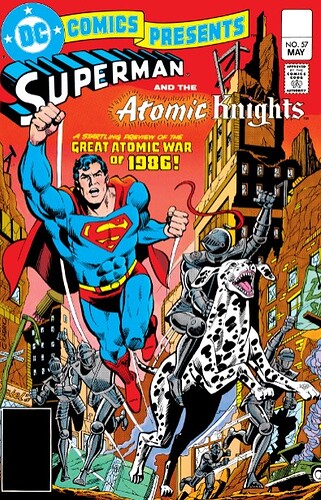 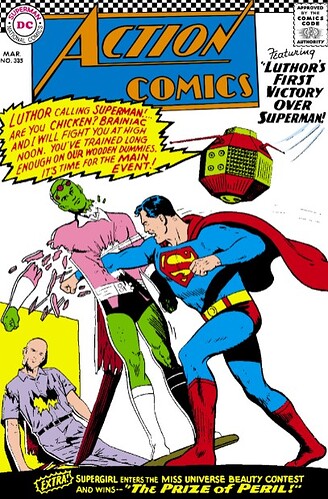 Lex Luthor teams up with the menacing Brainiac to collaborate on a scheme that will leave Superman’s self-confidence in ruins! And meanwhile, over in Supergirl’s corner of the comic… 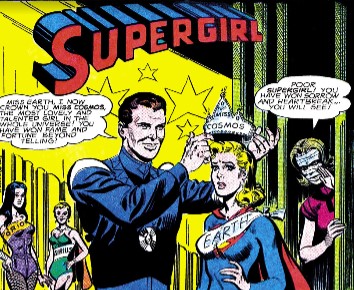 Note artist Jim Mooney signs on the left. He’s famous for his Supergirl and Spider-man art, and actually we’ve been enjoying his Action covers in previous weeks, but I also liked him in Omega the Unknown! A real special talent!!! Here’s his very first cover back in the Golden Age…this reminds me of a party game, but I can’t remember it’s name… 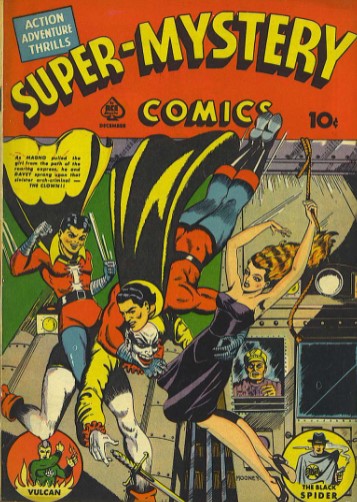 Superman and the Atomic Knights, Ghostly knight figures haunt Clark’s dreams as they demand, “Where were you during The Great Atomic War of 1986???!!!” 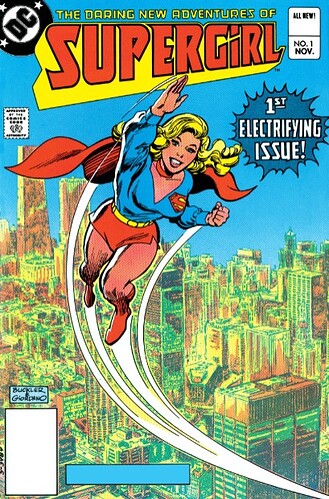 Daring New Adventures of Supergirl #1 (released 9/1/1982) DC UNIVERSE INFINITE Supergirl, as Linda Danvers, moves to Chicago to begin a new life as a student at Lake Shore University…I’m NOT making this up, this isn’t some @mgstv Photoshopping! 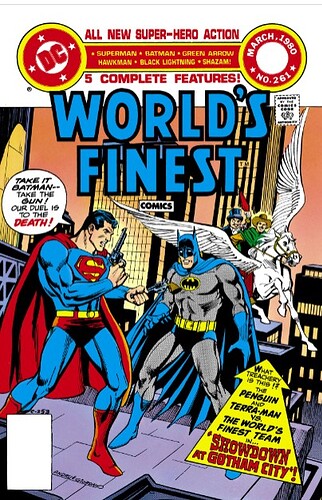 World’s Finest #261 (released February 1980) DC UNIVERSE INFINITE Denny O’Neil (writer) Rick Buckler (artist) SHOWDOWN AT GOTHAM CITY!” One of the more interesting villains with more than one facet to them for Superman during the Bronze Age (1970-1985 ie pre Crisis) was Terra-Man, a gun-toting bad guy from outer space- but originally the old West - with an obsession and maybe even true love for one Lana Lang! 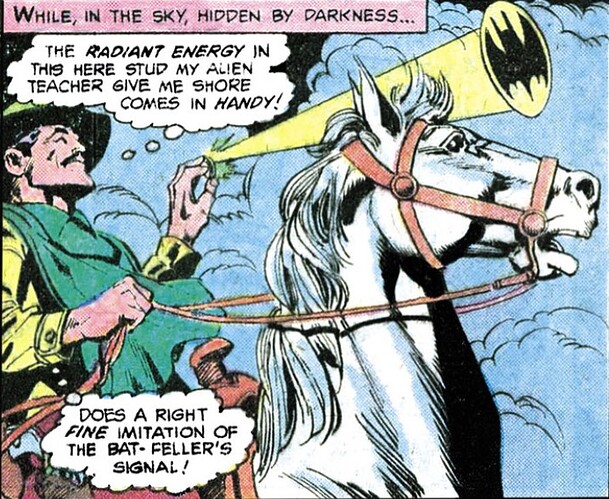 Sadly, most of those stories are currently missing here, so it’s a real treat this week to feature one of the few appearances of this sharp dressed cad in our Library! 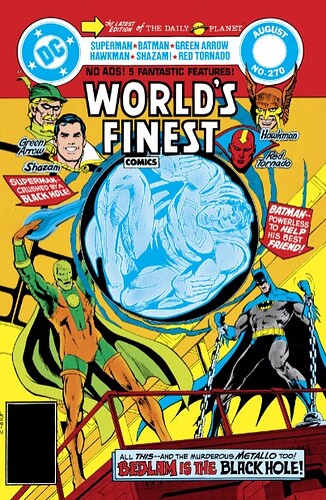 Gerry Conway, writer and Rick Buckler, Artist!! In honor of the Watch Along earlier this week run by @Bar-el , here’s a heartwarming story of Metallo and the cutest minature black hole he discovers while in prison contemplating his folly. Ok, close but not quite: Metallo is broken free of his cell on Superman Island by a miniature black hole, which he uses to power his artificial heart and to set a trap for Superman and Batman!

We’re only officially reading the first story in the issue, but feel free to check out the rest, there is some Don Newton art hiding in there, who I am a big big fan of (Shazam story starting on page 32).

Please consider sampling some of these classic Silver and Bronze Age wares, and let us know your thoughts below! Feel free always to post favorite panels / scenes etc from these exciting tales. Let us know: did we entertain you this time around? At least one or more of the selections this time around were chosen based on the private Club conversations of the past months, so don’t delay, join today!!!

Next time: we start Year Two of the Club Readings!!!

That’s a lot of stuff!

We have some annuals and a very special Lois Lane 2 part graphic novel we will be reading in the next few weeks that will probably reduce the number of comics those weeks.

I should rephrase, that’s the right amount of content!

Hot off the presses here arrives another exclusive from yours truly.

Yes, still being entertained @Don-El with all our selections. Thank you.

Speaking of those selections… Quite the action in this round of Action comics.

Especially when these two are out and about! 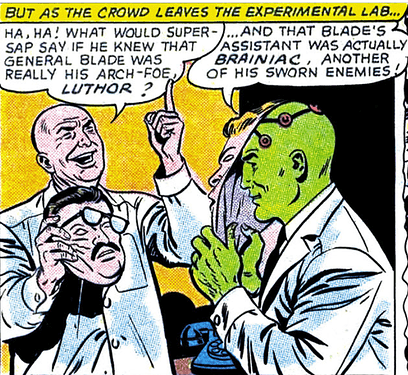 For our DC Comics Presents #57 selection… That was a nice beard Superman.

Although, living in a post apocalyptic world because of all out atomic warfare… Yikes!

Although good thing it was only a simulation, and by the books end all was well. 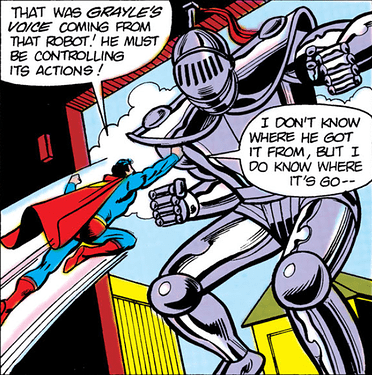 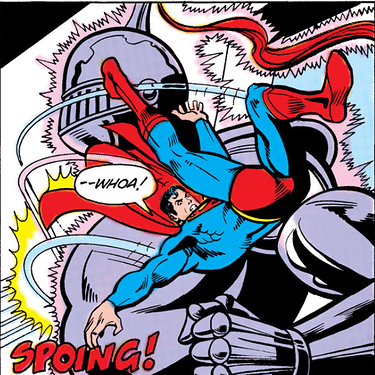 Funny how Supergirl mentioned Robert Redford as later reading in this weeks selection would detail. 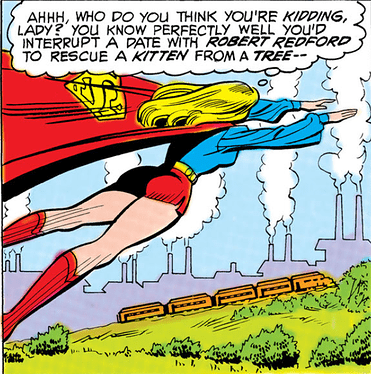 I have a feeling that @Reaganfan78 will enjoy this next selection from our World’s Finest #261 reading.

It was very cool seeing Superman smash this tornado. 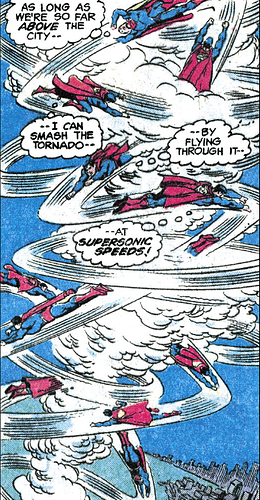 And to cap off the reading with these from our World’s Finest #270 selection.

Very interesting seeing a prison other than the Phantom Zone used by Superman.

And escaping prison for our super villains is just another day in the life. 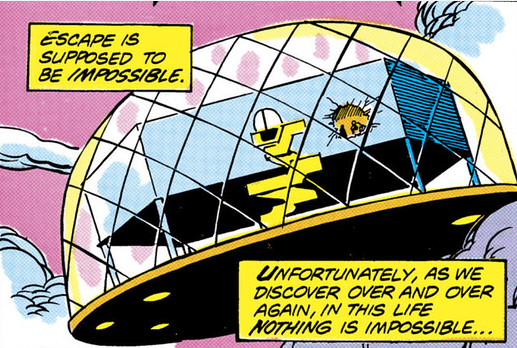 Thanks for leading the way @ajm08g ! Now that you’ve plowed through, hopefully others may take the literary fantasy cruise as well!

You hit upon it a couple of times here-it is a very unique kind of internal series continuity being used by the Silver Age writers, sort of a selective memory version.

Stacks of outlandish stories are conveniently forgotten by the writers, but then other fragments are “canon.”

I’m thinking something similar is occurring in current DC Comics.

A number of years ago I bought the first 20 issues of the Daring New Adventures of Supergirl on Comixology to read with my daughter but we only got through the first few.
I just flipped through issue 1 again and one thing I have to say is that Linda’s frilly dress is odd for a young college student.

Yeah I agree it was a curious outfit. I almost felt like I was reading a fashion magazine more than a comic book when she would dress like that. 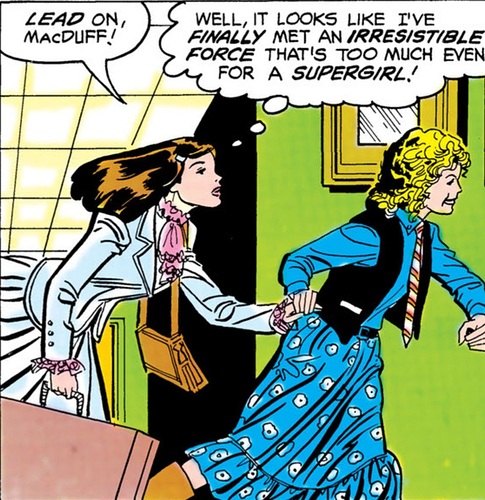 In fact everybody at school seems to be dressed to the nines. Later when they get to the possible apartment, a fellow tenant shows up wearing blue jeans and a casual shirt, isn’t that interesting?

Maybe the artist was trying to show his college-age daughter how he wished she would dress for college LOL.

Another thought on the 1982 Daring New Adventures of Supergirl, I wonder how much of that new series was due to the then upcoming movie for Supergirl I think around 1984. Later in the series she’ll fight some very magical foes (in fact, one introduced in this issue I believe) I’m wondering again considering what happens in the movie…hmmmm

Oh Supergirl. You beautiful, beauty pageant cheating superhero. The Superman story was solid, just enough twists to keep me interested, and of course Supes figures out the deal, so cool. But, Supergirl is just this side of crazy that it makes it so very interesting.
Dick Malverne. Somebody buy Dick some confidence. His dreams crack me up. Linda’s new suitor has a yacht made of gold!
Now, as interesting as it is to see Kara emotionally destroy other young women, we knew she had a good reason. Then they story takes a nice Twilight Zone turn with the former beauty pageant winners. What will happen to Kara! Must wait and see.

I notice as we progress in time here with the Silver Age tales that more and more stories seem to be Marvel 60’s style “continued next issue.” 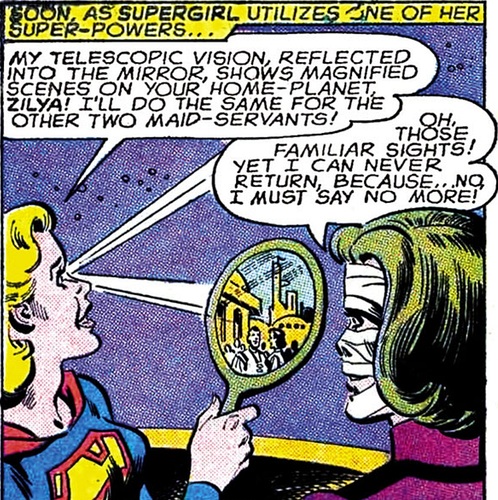 It’s the whole “looking over the horizon” thing. I learned a lot from comics, but not about science (except for the distance for geosynchronous orbit)

They must be related 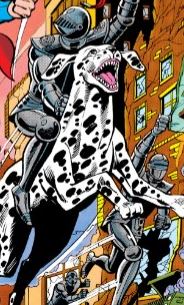 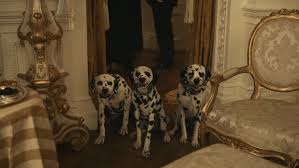 (from the upcoming Cruella movie)

Doggone they do look the same!