6 radio show episodes in one master recording: The Adventures of Superman Radio Show episodes #1151-1156 (1945), the final parts 15-20 of first The Atom Man storyline, followed by the beginning episode for “Atom Man in Metropolis”!!! 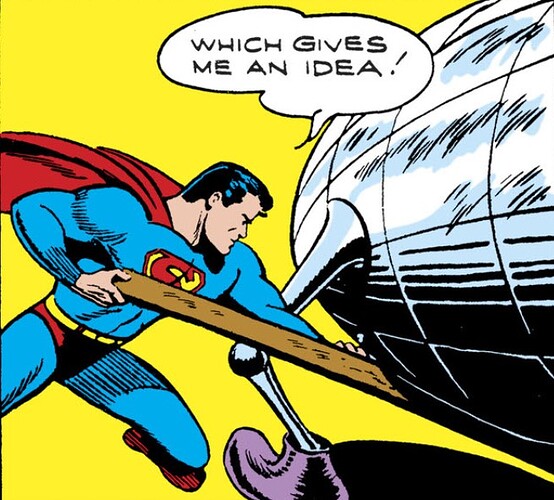 The Atom Man in his guise as well-spoken Henry Miller apparently stands triumphant, and Metropolis may soon be obliterated by his radioactive power!!!

6 short episodes = a fun way to celebrate the halfway point of the week!!!

We’ll launch the audio recordings in perfect harmony like the nuclear subs on the attack!

What to queue and save to Youtube Favorites beforehand:

There is one (1) recording of the 6 episodes we will be listening to and discussing live as they occur here in this thread Thursday evening:

The Adventures of Superman Radio Show episodes #1151-1156 6 episodes, Parts 16-20 of "The Atom Man, then the first episode of “The Atom Man in Metropolis” all in one recording!!!

All of the recordings for these Listen Alongs are also in this Youtube Playlist: The Adventures of Superman 1940s Radio Show, with most commercials but not all removed - YouTube
All Superman Radio Show episodes are public domain.

You gotta edit your eyeballs at the bottom lol

It might depend on the device you’re on but does it look any different?

Nah still Wednesday and I refreshed. That’s ok maybe it will just suddenly fix itself for me lol

Third Day fourth day fifth day whatever your favorite is 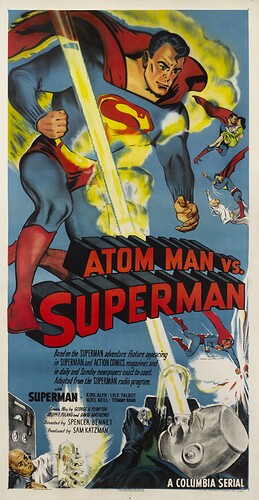 Lol it would be amazing to talk to someone who was a fan as a kid during the radio era and to see what they think of how invulnerable he’s gotten over the decades!

Yeah I keep thinking about when that must have changed. In the picture I feature on the post here he’s using a piece of wood, he is leveraging of all things.

Note the change in time as well as day. Hope to see everybody there!

A mere five hours before we witness the conclusion of the first Atom Man Battle with Superman!

Looking forward to this tonight!

And may I say Henry Miller is a well-spoken villain… for a homicidal maniac villain that is.

4 minutes. I have the Youtube version primed and ready to go!